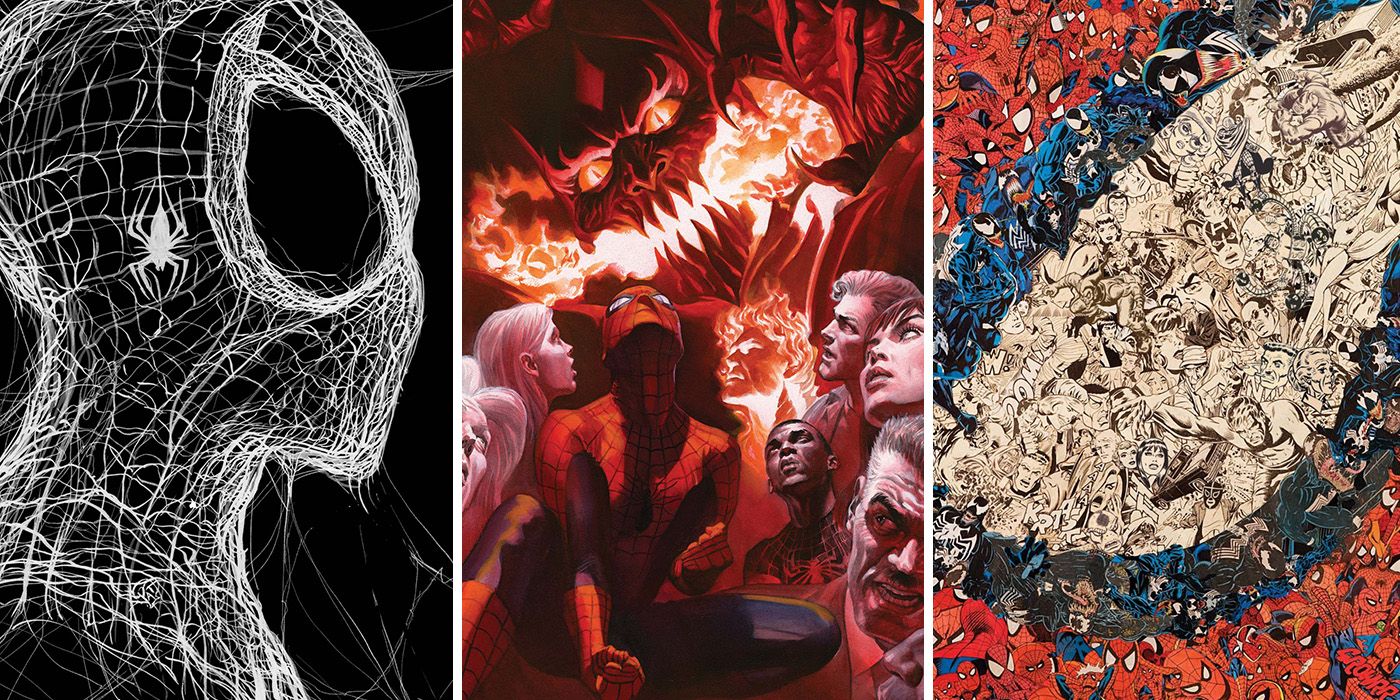 The old adage “don’t judge a book by its cover” holds true, but when it comes to comic books, the cover is one of the most important selling points. It’s the first thing comic readers see before they buy a book. Spider-Man books feature some of the best covers, and Marvel Comics often uses well-known artists to create special covers to promote their books.

In the past 10 years, Great Spider Man and other Spidey titles have beautiful covers illustrated by legendary comic book artists such as Alex Ross, Patrick Gleason, and Ryan Stegman. The best Spider-Man covers show new eras for the character, evoke classic storylines and have seductive graphic designs.

ACO is a comic book artist who has contributed covers to many Marvel series, such as: Nick Fury† Doctor Doomand Uncanny X-Men† His work on Great Spider Man can be found on the cover of the 2018 ASM annual edition. This song, written by Saladin Ahmed, took readers back to the time when Peter first wore the symbiote costume.

Unaware of the suit’s true nature, Peter’s body is taken for a ride as the symbiote uses it as a craft. The issue is accentuated by ACO’s beautiful cover which shows the brilliant design of Spider-Man dressed in black. The shadow of Venom in the background recalls the nightmare sequence of Spider-Man: The Animated Series†

Each cover for the six-part issue Spider-Man: Life Story miniseries is nice, but the cover art for release #3 by Chip Zdarsky is particularly striking. Life story follows Spider-Man’s life as if time shifts, just like in the real world. Peter’s body ages and his reflexes slow down, so he attracts the symbiote #3† This story adapts the legendary “Kraven’s Last Hunt” arc.

RELATED: The 6 Best Spider-Man Stories of the Past 60 Years

The simplistic cover shows a Spider-Man dressed in black lying in a coffin, as missiles and a spider descend on him. The cover is a call back to the memorable image of Spidey crawling from his grave, alluding to real events of that decade.

Alex Ross is truly one of the greatest comic book artists of all time. Not only did he illustrate some of the most successful comics, such as DC’s kingdom comebut he has provided beautiful album covers for Great Spider Man and other Marvel titles. During Dan Slott’s “Worldwide” Spider-Man era, Ross wrote covers for dozens of songs.

One of his best covers appeared on ASM #798† Slott’s ASM run came to an end and Norman Osborn had returned as the Green Goblin. Spidey fought one of his deadliest foes on the issue and on the cover. Ross’s cover shows a classic showdown between the two enemies that could easily be a tribute to early Spidey covers drawn by Steve Ditko or John Romita.

In 2015, Dan Slott led the Spidey offices with the launch of the “Spider-Verse” crossover event. “Spider-Verse” was told in half a dozen Spider books like ASM† spider womanand Edge of Spider-Verse† The covers for this crossover event were beautiful, with dozens of variants of Spider-Men and Women from alternate universes, and Olivier Coipel’s cover for ASM #13 was no exception.

Bruised and bloodied, Peter Parker leads a team of Spider-People into battle on a dynamic, exciting cover. “Spider-Verse” is a book that every Spider-Man fan should read. The story is a fun, wild ride that spans just about every iteration of Spidey from comics and beyond.

Alex Ross provided covers for just about every song from Great Spider Manthe fourth part. Dan Slott’s legendary run was nearing its end in ASM #800 with another beautifully painted cover by Ross. The cover is reminiscent of Silver Age Spider-Man covers such as ‘Turning Point’. Spidey is overshadowed by the evil Red Goblin as the floating heads of his friends and family watch in horror.

ASM #800 is an action-packed release featuring an epic showdown against the Red Goblin, a powerful fusion of Norman Osborn and Carnage. Everything about this song, from the script, to the interior art, to Ross’ cover, makes Slott’s run at a high level.

Peter Parker’s “death” in the “Dying Wish” arc was very heartbreaking, especially since Doc Ock kept running around inside his body. Fortunately, Octavius ​​learned the lessons of power and responsibility, and Peter fought his way back to the surface of his mind. The Superior Spider-Man The era lasted for several years, and while it was an enjoyable time, fans were excited about Peter’s eventual return.

The excitement of the fans was captured by Humberto Ramos when he designed the cover for Great Spider Man full. 3 #1† Peter Parker is back and happier than ever. Ramos always presents Spider-Man in energetic, exaggerated poses and his portrayal of Peter on this cover is spot on.

Miles Morales: Spider-Man #1, released in December 2018, promised a new era for the character and series. Written by Saladin Ahmed and illustrated by Javier Garron, the comic delivered. Miles is Spider-Man, and he proves that more than one person can use the Spidey title – leading to a fan advocating for Miles as Ben Reilly’s new Spidey successor.

Illustrated by Brian Stelfreeze, the cover is stunning and striking with a silhouette of Miles lit up by a collection of lit city windows behind him, with the red of his suit exaggeratedly accentuated. Despite the clutter of construction lights, the cover’s design is both simple and memorable.

The launch of the Superior Spider-Man series marked a new era for Spider-Man comics. This new “Superior” era lasted much longer than readers expected. Some fans thought Doc Ock would remain in Peter’s body for a few problems at most, but Otto ran the main Spider-Man title for years.

Superior Spider-Man was daring, inventive and incredibly enjoyable. When the series launched, artist Ryan Stegman provided interior and cover art. His covers were striking, with Spidey often depicted in silhouettes. SSM #1 was especially memorable, when an Otto-controlled Spidey crept menacingly toward the readers.

The cover to ASM #55 is one of the most visually striking Spider-Man covers of all time. Patrick Gleason, famous for his work on DC Comics such as Superman and Green Lantern Corpsjumped over to Marvel Comics and joined Nick Spencer’s run on Great Spider Man†

Gleason’s interior art for the books is great, but his cover art might be even better. ASM #55 marked the end of the “Last Remains” storyline, and Gleason delivered a beautiful, yet terrifying cover. Spider-Man’s mask is made up of thousands of spider webs in a terrifying and stunning image.

Artist Mr. Garcin is known for his incredible collages and the art he created for ASM #700 arguably one of his best pieces. It is certainly one of the most compelling Spider-Man comic covers of all time. The cover is one that readers can stare at for hours, picking out all the different Spider-Man poses drawn over 50 years.

The cover fits the story well. ASM #700 was the end of an era, replaced by the “Superior” era of Doctor Octopus. This song and the entire “Dying Wish” storyline were one of Dan Slott’s biggest contributors to: Great Spider Man† The story inside was emotional and heartbreaking, while the cover sparked nostalgia.

Cole spends most of his free time reading comics and fantasy novels, or watching TV and movies. If capes and superpowers are involved, he’s interested. He will forever debate which fictional characters would win in hypothetical battles, no matter how damaging to his social life.