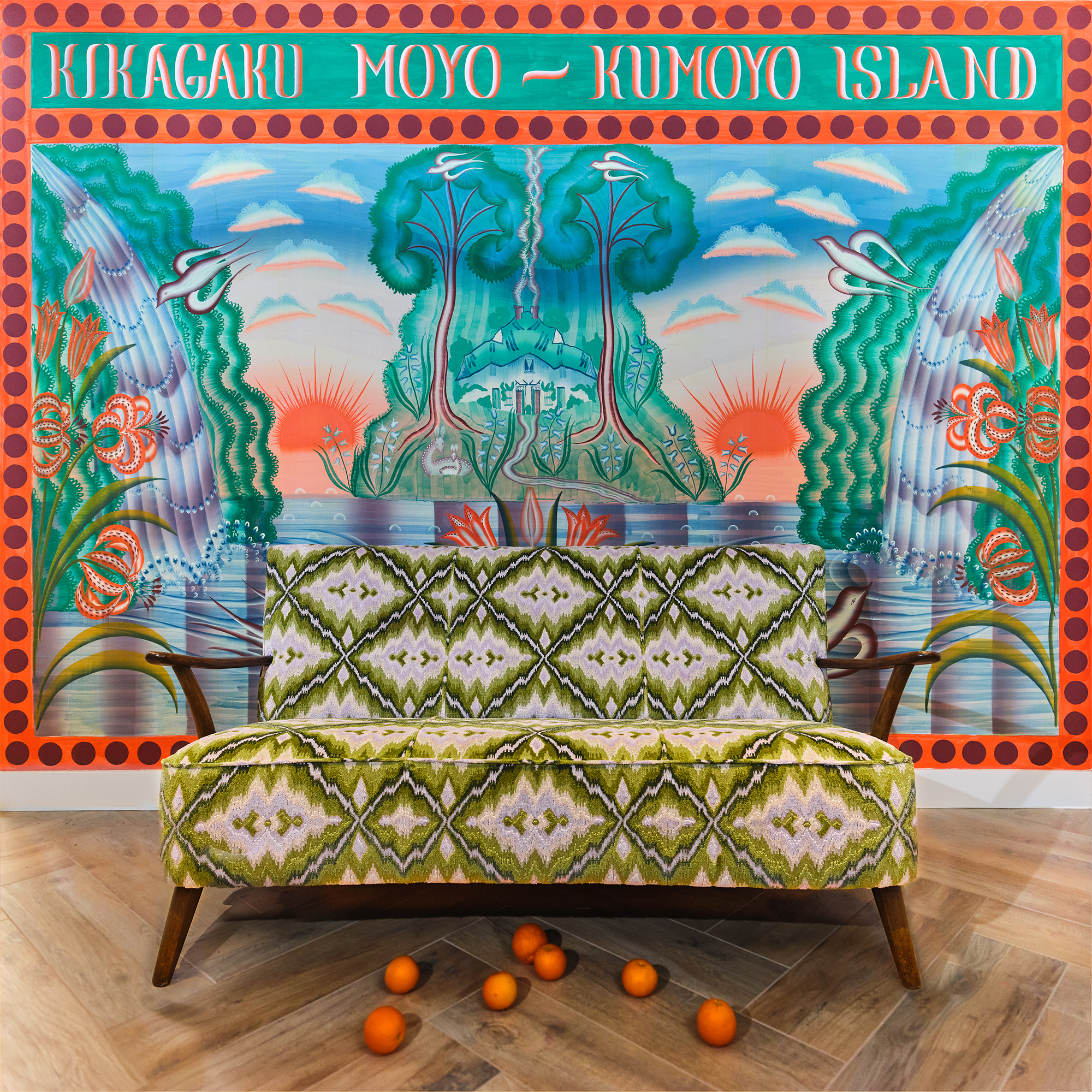 If Healthy Island is born of a return home, it is by no means a back-to-basics effort. The band has previously touted it as a destination they’ve traveled to all these years, an abstract magical retreat where you can pause, observe and reflect. Despite the emphasis on stillness and contemplation, this is the most dynamic Kikagaku Moyo album to date. At its quietest, it is bursting with energy and ideas. And as implied by the fiery wind tunnel joyride that ushers in the lead single “Cardboard Pile” – perhaps the closest this band has come to the overwhelming wave of their Japanese psych predecessors Boredoms – it often rises well above its mellow baseline.

Opening track “Monaka” exemplifies the album’s complex splendor: named after a Japanese waffle sandwich and inspired by min’yō folk traditions, it weaves an increasingly intense groove of strands of funk bass, a menagerie of percussion, semi-whispered vocals, Ryu Kurosawa’s darting sitar, and ’60s-vintage wah-wah fuzz guitar. At just over five minutes, the song is a world unto itself, but also a gateway to Healthy Island‘s astonishingly varied topography. The sweaty funk vibes continue on “Dancing Blue”, where a thumping background and catchy rhythm give way to hypnotic acoustic strumming and, finally, a spot-lit guitar/sitar dance.

Loose but contained beats like this abound on this album. I maintain that a rap producer should sample the second half of ‘Cardboard Pile’, with its jumble of guitars and royal brass; the towering rocker ‘Yayoi Iyayoi’, with its punchy power chords and hard hitting drums, could also be flipped into a sick breakbeat. Yet Healthy Island is not all so hard; a big part of the thrill of the album is hearing Kikagaku Moyo bring forth so many different sounds and feelings. The whimsical “Gomugomu” is practically a cartoon. On the intermezzo “Field Of Tiger Lillies” an annoying recurring guitar figure strikes like a cracking whip. Kikagaku serves up magnificent, chill beauty in multiple forms, from the hypnotic ambient folk song ‘Nap Song’ to the subtly epic Erasmos Carlos cover ‘Meu Mar’. The instrumental “Effe” reminds me of 2000s blog rock at its dreamiest and most beautiful, while the softly droning “Daydream Soda” is reminiscent of Gold Panda’s liminal-space dance music or an old Radiohead B-side.

Eventually, inevitably, Kikagaku Moyo returns to rest. Closer “Maison Silk Road” rounds out this band’s discography with over six minutes of eerie glowing synths, plaintive piano, reverb-soaked guitar and haunting found sound. It amounts to a monolithic celestial drone, as mesmerizing and serene as any new age recording you will find. Consider it the light at the end of the tunnel for a group going out in top form, with such a tantalizing collection of music that I wish they would go on forever.

Other notable albums this week: