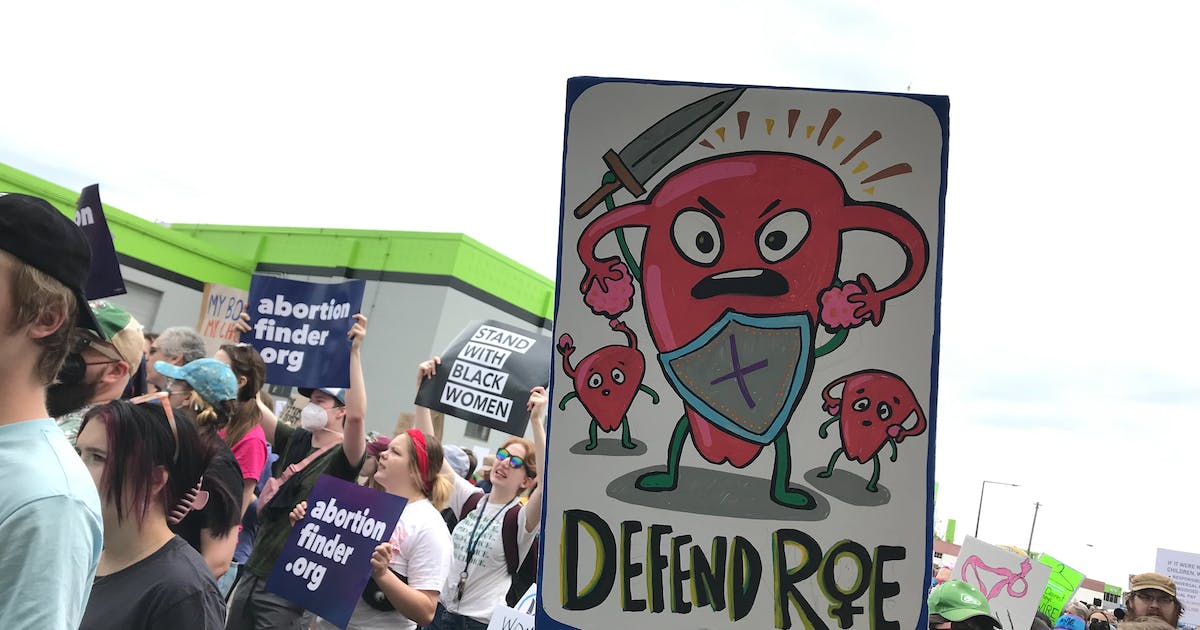 Abortion rights supporters on Saturday blocked a street next to the Planned Parenthood facility in the St. Paul’s Midway borough, one of hundreds of “Bans Off Our Bodies” protests across the country on Saturday in response to a leaked advisory draft showing that the U.S. Supreme Court likely to overturn the landmark Roe v. Wade decision.

Hundreds of protesters filled a 150-foot-long Charles Avenue from curb to curb, holding up signs that read “Break down the courthouse” and “Against abortion? Get a vasectomy” and chanted “Keep your rosaries off our ovaries.” They listened to speakers including both US Senators from Minnesota.

“The most American of values ​​is the value of freedom and autonomy over our own bodies,” said Senator Tina Smith. “We’re not going to let these radical Republicans tell us what to do with our bodies.”

“Get angry and vote,” Senator Amy Klobuchar urged the crowd.

Protesters Melissa Jones and Brittany Frickstad, both of Bloomington, brought signs with a coat hanger and the words “We will not go back” and “Never again”.

The two said making abortion illegal will not stop abortions, it will only stop safe abortions.

Gail Loverud, a 76-year-old resident of Ham Lake, came out with a sign that read, “My body, my decision.” Loverud said she was protesting on behalf of her 13-year-old granddaughter.

“I think I’m here for all young women,” she said. “It’s their right to control their bodies.”

The protesters later spread out on sidewalks for several blocks of University Avenue, waving signs at motorists honking their horns. A handful of anti-abortion protesters were also in attendance.

In addition to the event in St. Paul, “Bans Off Our Bodies Rallies” were also scheduled for Saturday in Duluth, St. Cloud, Brainerd and Grand Rapids, Minnesota, according to the Planned Parenthood Action Fund website.