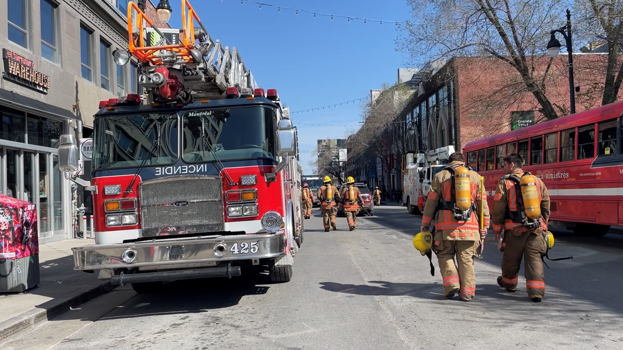 About 15 people were evacuated from homes and commercial buildings after a fire broke out on the Plateau on Saturday afternoon – some of whom were halfway through getting new tattoos.

The fire occurred on St. Laurent Blvd., between Sherbrooke St. and Pine Ave.

More than 100 firefighters came to the scene to fight the blaze.

No one was injured, according to the Montreal Fire Department (SIM).

The SIM said the fire may have been an act of arson; detectives came to the scene to determine whether a criminal offense had been committed.

The owners of Tatouage Locust told CTV News they called 911 after noticing flames in their backyard around 1:30 p.m.

While I was tattooing, I just turned to look outside, and we saw the fire coming about 10 meters above the ground,” said owner Aimee Boucher.

“It had spread very quickly.”

The evacuees were allowed to return to their homes and businesses by early Saturday evening.

Boucher later told CTV News that the back of the store was scorched, but everything was still intact.