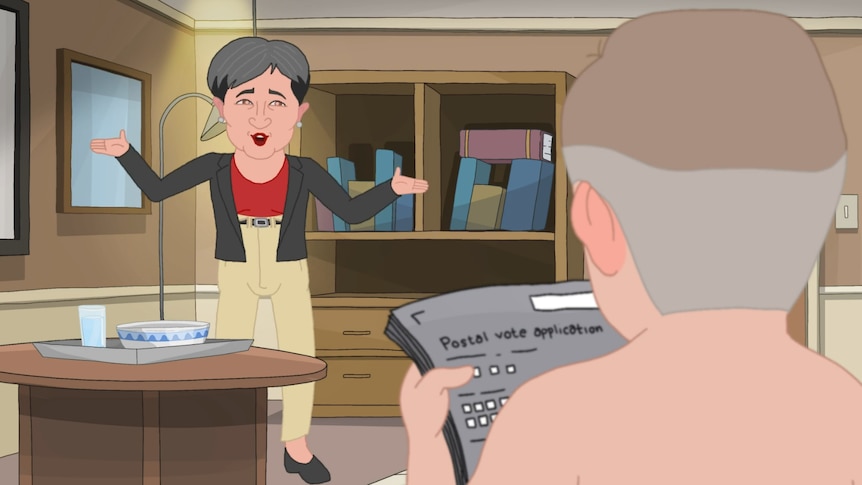 A cartoon posted by One Nation leader Pauline Hanson has been removed from multiple social media platforms after it was flagged for spreading false claims about voter fraud in Australia.

Ms Wong’s caricature goes on to point to false claims about dead people’s votes, mail votes being stolen from mailboxes and falsely claiming that the 2010 election, where Julia Gillard formed a minority government, was swayed by voters fraudulently using multiple submitted ballots.

The cartoon also features a racist trope about the origins of COVID-19.

The video, which has nearly 100,000 views across multiple platforms, has angered the Australian Electoral Commission (AEC), which has filed complaints about the video with leading social media companies.

At the time of writing, the video is from Ms. Hanson’s Facebook and TikTok accounts. A version of the video posted on Twitter now includes a “misleading” content warning.

“There is no evidence that the level of apparent multiple voting in Australia has ever been sufficient to topple the margin in a match,” said an AEC spokesman Evan Ekin-Smyth.

The AEC said there are multiple safeguards to ensure deceased Australians are removed from the electoral roll and to validate postal voting.

“We regularly receive data on births, deaths and marriages in order to remove deceased Australians from the roll,” said Mr Ekin-Smyth.

“We also validate postal voting requests against the list prior to distribution and again upon receipt of a completed postal vote.”

Ms Hanson has refused to remove the video and is complaining via her Facebook account about the video being taken down before repeating the false claims of voter fraud.

“Sometimes the truth hurts so I won’t delete the cartoon on any social media platform,” she said.

Anne Kruger of the disinformation research organization First Draft said the video fueled a much-heard trope of voter fraud that has been used to discredit the US election process.

“This has the effect of casting doubt on voters, despite, as the AEC noted, there is no evidence to support such claims,” said Dr Kruger.

“However, the damage has been done and this is undermining our democratic processes. Politicians hold a prominent position in our society and should be aware of the weight their words carry.

“In addition, and more disturbingly, this tweet appears to have weaponized the use of satire or parody. It is disappointing that this device has been used to post hateful, polarizing and divisive content.”

Do you know more?

No system is 100 percent secure, but the Signal app and ProtonMail can be used to protect your identity through end-to-end encryption. Read the terms and conditions to find out if this is the best way to communicate for you.

Unsubstantiated claims of voter fraud haunted the 2020 US election, culminating in the storming of the US Capitol on January 6, 2021, following Donald Trump’s claims of “stolen elections”.

Similar voter fraud claims the election made its way to Australia ahead of the election, with some minor parties and alternative media plunging into the issue despite a lack of evidence.

Google Trend analysis from First Draft found that over the past week there has been a notable increase in interest in fringe “freedom” parties related to postal voting.

Earlier this month, the AEC and Facebook warned of “dangerous” voter fraud stories spreading on Facebook, seeded by candidates from minor parties, including One Nation and the United Australia Party.

Late last year, Morrison’s government was forced to withdraw a controversial bill it backed that, if successful, would have required Australian voters to present proof of identity in order to vote.

Critics argued that if the rule were enforced, vulnerable Australian voters would lose their right to vote.

One Nation Senator Malcolm Roberts, who has supported the bill, has repeatedly called for voter identification reform to address alleged electoral integrity issues, including claims of impersonation and multiple voting.

But recent estimates from the AEC suggest the multiple vote rate in the most recent 2019 federal election was a measly 0.03 percent, adding that the problem of multiple voting was “generally a very minor one.”

The AEC added the matter to its misinformation register, stating: “There is no evidence that voting applications have been received by post under the names of deceased Australians”.