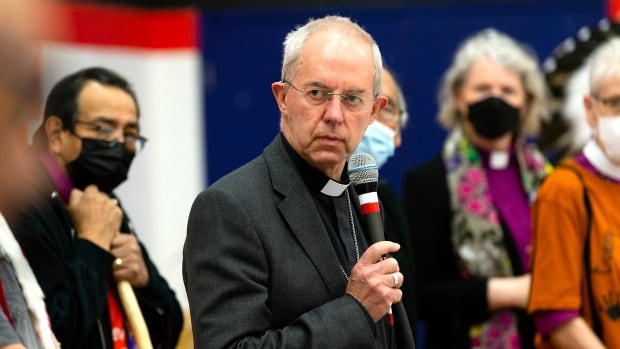 WARNING: This story contains details that some readers may find disturbing.

The Anglican church spiritual leader told survivors gathered Saturday at a Saskatchewan First Nation that he was sorry the church had allowed “terrible crime” in residential schools.

Archbishop of Canterbury Justin Welby began his visit to James Smith Cree Nation, east of Prince Albert, around noon when he met dignitaries from James Smith’s indigenous governments and the Federation of Sovereign Indigenous Nations, which represents 74 First Nations in Saskatchewan.

“I want to recognize for myself and my colleagues how much pain you are willing to endure so that your story is heard,” Welby said.

“I will say that I come in ignorance, because I must hear every shame, express that shame and respect those who have committed such terrible injustices.”

Survivors from across Saskatchewan shared their stories of how the residential school system tore families apart, raised doubts and self-confidence, and left them traumatized by sexual and physical abuse. Many spoke of blaming not the Church but those who acted on behalf of the Church.

After listening to their stories, Welby apologized.

Welby acknowledged that it wouldn’t be easy for survivors to speak at the event, and that telling their experiences can be painful to share.

He said it would be impossible to understand the suffering of the survivors, but he hoped to move himself from “unconscious ignorance” to a deep realization of their experiences, and to humble himself before those present.

Sanderson attended Gordon’s Indian Residential School, about 100 miles northeast of Regina, for three years before attending All Saints Residential School in Prince Albert. Both were administered by the Anglican Church.

“It’s a good thing for them to come and say ‘I’m sorry’ too, you know? It makes you feel good and hopefully our members feel good about it too,” Sanderson said Saturday morning.

Sanderson said he was able to deal with the trauma 11 years of residential school left him by exploring his culture, his ceremonies and his First Nations way of life.

The Anglican Church was part of his life, growing up outside of residential schools; Sanderson said his father was actively involved in Anglican Church activities in James Smith Cree Nation.

The archbishop offered to continue some actions on Saturday after listening to survivors’ stories about residential schools, the lasting effects of the institution and the trauma they have to live with.

“I want to avoid what happens too easily in moments like this, which is to promise too much and deliver too little,” Welby said.

“I’d rather promise too little and deliver too much, if God’s grace gives me the strength to do so.”

His promise to those gathered at the gymnasium was to talk to Bishop Linda Nicholls, who invited the Saskatchewan Archbishop, about what they can do to address the damage left in particular by the doctrine of discovery.

The Discovery Doctrine was the framework used by colonial countries, England, Spain, Portugal, and others to justify claiming land in North America and other continents as their own.

Countless survivors spoke of how this led to the establishment of residential schools and the consequences they face today.

Welby said he also hoped to ensure survivors’ stories of suffering in residential schools are heard to prevent such horrific actions from happening to anyone else at the hands of the church.

Between 1820 and 1969, the Anglican Church had about three dozen residential schools in Canada, as well as more than 150 Indian day schools, according to a list prepared for the Federal Indian Day School class action.

The Anglican Church apologized for its role in residential schools in 1993 and in 2019. She has also paid $15.7 million in compensation.

The church also recovered $2.8 million, which it said it invested in Indigenous ministry programs, after negotiating a different reimbursement formula with the Roman Catholic Church.

Earlier this week, survivors and advocates questioned the purpose of the visit and whether it will lead to meaningful action.

Welby, who as archbishop is the religious leader of the Church of England but not the head of the church – a title that belongs to the British monarch – also plans to travel to Prince Albert on Sunday before heading to Toronto.

His visit coincides with the 50th session of the Provincial Synod, which will be hosted by the Diocese of Saskatchewan in Prince Albert through Sunday. Delegates from Saskatchewan, Alberta and Manitoba, as well as the Northwest Territories and Nunavut, will be in attendance.

Sunday at 2 p.m. Welby will meet with Anglican and non-Anglican Indigenous leaders.

Support is available for anyone affected by the lingering effects of the residential school and for those triggered by the latest reports. A national crisis line for residential schools in India has been set up to provide support to residential school survivors and others affected. People can access emotional and crisis referral services by calling the 24-hour National Crisis Line: 1-866-925-4419.