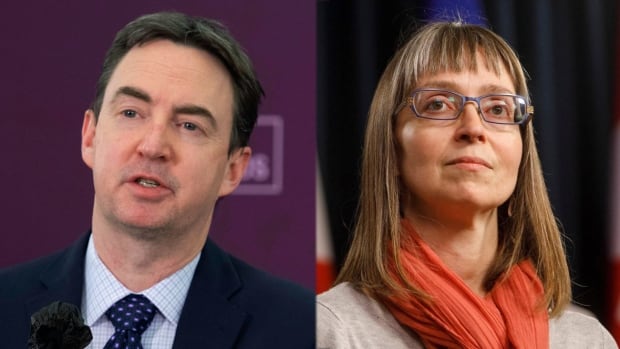 The severity of the Omicron wave has been slowly decreasing for weeks. The provincial government has updated its COVID-19 updates with Dr. Deena Hinshaw and Health Secretary Jason Copping changed from a weekly event to biweekly.

At Wednesday’s press conference, Hinshaw announced that this would be the last regularly scheduled COVID update.

“We remain committed to the transparent communication of important public health information, and we will of course provide updates as needed,” she said.

Alberta Health will continue to update public COVID-19 data each week, she said.

In the fall, Alberta Health will change its COVID reporting to match that of its flu dashboard, showing how the two respiratory illnesses are spreading, she added.

The cessation of regular personal updates is part of this transition, Hinshaw said.

“We are entering a phase of the pandemic where our response could be de-escalating while we remain vigilant and prepared to respond to new variants that could lead to another wave of cases and hospitalizations,” Copping said Wednesday.

Public health regulations for permanent care facilities will be repealed on June 30, Copping said, but protective policies remain in effect as part of operational standards.

Alberta Health Services will monitor outbreaks in higher-risk environments and respond as needed, he said.

Later this summer, some AHS test sites will be converted to swabbing sites that will integrate with other services, Copping said.

Hinshaw noted that living with COVID-19 doesn’t mean it will go away, but the county has tools in place to lift public health restrictions.

COVID-19 vaccines are one of those tools, she added. Hinshaw encouraged Albertans to get their initial vaccine doses (if they haven’t already), and booster doses when eligible.

Provincial data suggests the government may roll back public health measures, said Noel Gibney, professor emeritus of intensive care medicine at the University of Alberta. But he hopes the restrictions will come back when another wave driven by new variants comes along.

“Public health and medical science tell us that this pandemic will not behave the way we hoped,” Gibney said.

Being willing to re-impose restrictions would demonstrate the Alberta government’s desire to keep the public safe, acknowledging that hospitals have been under severe spikes, Gibney said.

He said given the low level of testing, Alberta could be in the midst of a wave by the time data shows one has happened.

Since the start of the pandemic, a total of 4,604 Albertans have died from the disease.

Meanwhile, fewer Albertans were hospitalized with COVID-19 than the previous reporting week.

On Monday, 661 people were treated in hospital, including 17 patients in critical care.

A week ago, there were 719 hospitalizations, including 19 patients in intensive care.

1,086 new COVID-19 cases had been identified through PCR testing in the last reporting week – nearly 400 less than the previous week.

The amount of virus circulating in the community is believed to be higher because most Albertans do not have access to PCR testing and the data excludes positive rapid test results.

Of Alberta’s entire population, including those ineligible, 77.3 percent of people have two doses of COVID-19 vaccine; 81.5 percent of the population has at least one dose.

dr. Lynora Saxinger, an infectious disease specialist at the University of Alberta, said she is concerned that the upcoming changes to reporting could reinforce the misconception that the pandemic is over, especially given the high rate of transmission.

“A balance has to be struck there,” said Saxinger.

“Some people are like, ‘Absolutely, do all the same things we used to do,’ and I’m not sure that’s quite right. On the other hand, we have people like, ‘It’s over, we don’t even have to don’t think about it anymore’, and that’s not right.”

Another case of monkey pox identified

A new case of monkey pox has been reported in Alberta, Hinshaw said.

The person is an adult and they are linked with another case of monkeypox reported outside the province, she said, adding that the risk of infection in Alberta is low.

A total of five cases have now been found in Alberta. all of them reported in the Calgary and Edmonton health zones, she said.