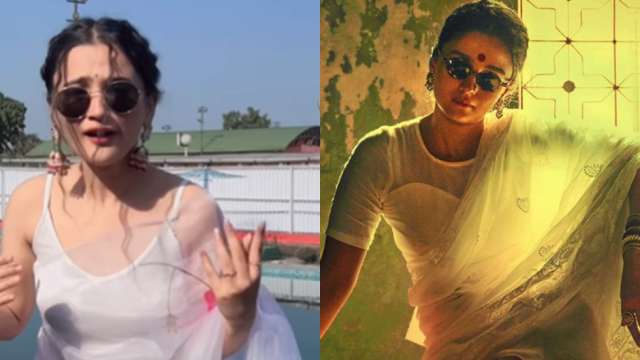 The internet has been stunned by a viral video of Alia Bhatt’s doppelganger. Celebrity lookalikes of Shah Rukh Khan and Johnny Depp have recently gone viral. Now internet users cannot get over how much this woman resembles Alia Bhatt from Gangubai Kathiawadi.

Celesti Bairagey shared a video on Instagram where she herself danced and lip synced to the song Dholna from the movie Dil Toh Pagal Hai. The woman was wearing a white sari and her hair was braided in a bun, similar to Alia Bhatt’s. Her ensemble included round sunglasses and traditional earrings.

Although the woman bears an uncanny resemblance to the actress, it seems that the clothes and looks have a lot to do with it. However, she does have Alia Bhatt’s dimples, smile and complexion.

With over 5.4 million views and 318k likes, her role has gone viral. Many internet users assumed it was Alia Bhatt herself, dismissing the possibility of a doppelganger.

Aided by Sanjay Leela Bhansali, Gangubai Kathiawadi, which was released in theaters on February 25, revolves around a girl who is sold into prostitution by a suitor and how she becomes a prominent and celebrated figure in the underworld and red light district from Kamathipua.

Sanjay Leela Bhansali was excited about streaming his film on Netflix, saying: “Gangubai Kathiawadi is a very special film for me and we have been honored by the phenomenal response it has received worldwide. Although the film has encouraged audiences to return Coming to theaters, I’m thrilled that the film will now reach an even wider audience in India and around the world with Netflix.”

Besides Alia, Gangubai Kathiawadi also has a number of notable actors including Ajay Devgn, Jim Sarbh, Shantanu Maheshwari, Vijay Raaz, Indira Tiwari and Seema Bhargava. Gangubai Kathiawadi is also one of the films to enter the 100-crore club this year.