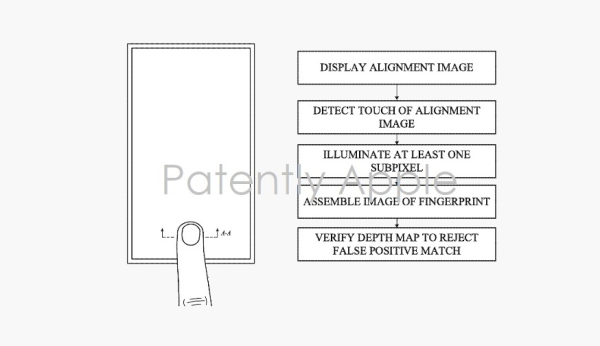 While there are rumors that Apple has left Touch ID under the display, Apple continues to work on their patented invention that doesn’t just include Touch ID under the display. as well as iris imaging and Face ID below the screen. In April, Patently Apple published an IP report titled, “Apple wins a patent for Killing the Notch and placing their TrueDepth camera system behind the screen so as not to interfere with content.” Apple will have to implement today’s invention or a similar invention to ensure that Face ID continues to function under an iPhone screen.

in many versions, an optical image array is positioned behind a display and is oriented to receive light transmitted through the display in a direction generally opposite to that of light emitted from the display.

In some cases, the active display area #602 may display an image or animation that encourages the user to touch a certain part of the low pixel density area #606 so that the user’s fingerprint can be captured.

For example, in some embodiments, the active display area may display a shape within the low pixel density area #606. The shape can be animated in a way that grabs the user’s attention. For example, the shape can pulse, rotate in three dimensions, flash one or more colors, vibrate, and so on. In other cases, other shapes, patterns or animations are possible.

As this is a patent application, the timing of such a product on the market is unknown at this time.