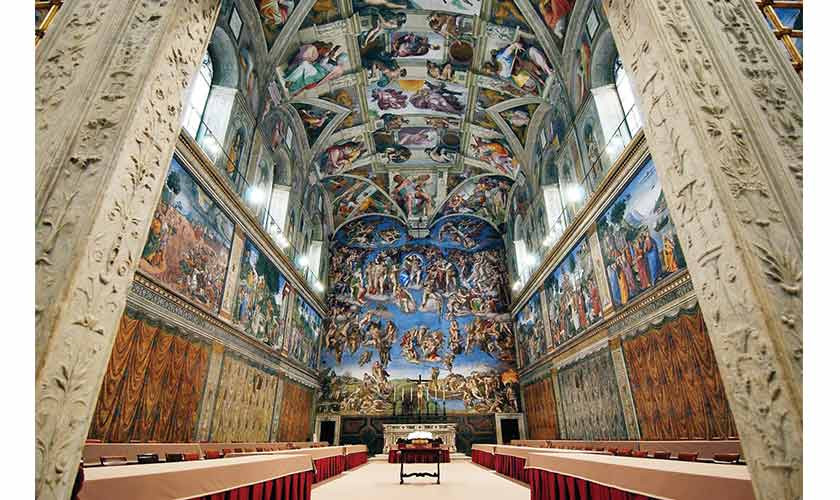 Ichelangelo (born March 6, 1475, Italy – died February 18, 1564, Rome) was a Renaissance sculptor, painter, architect and poet who exerted an unparalleled influence on the development of Western art. In today’s world, he needs no introduction to art lovers, students, liberal arts educators, travellers, historians, or anyone else who has ever seen his magnificent works in real life, in books, or on the Internet. Michelangelo’s works are among the most recognizable in the world. The artist is known for creating world famous works such as the Sympathy circa 1499, in the foreground with Davida sculpture he made for the cathedral of Florence, commissioned in 1501. The 34 frescoes on the ceiling of the Sistine Chapel in Vatican City are probably some of his best works.

Those who have visited the Sistine Chapel in Vatican City know that one cannot see many details of the frescoes at a height of about 60 feet. There are also long lines of people from all over the world waiting to glimpse the multi-digit compositions and very limited time to stop and listen to the audio description of each fresco, or read through the booklet that you receive from the reception. The same happened to SEE founder and CEO Martin Biallas; while visiting the Sistine Chapel in person. He didn’t enjoy the experience as there were thousands of people around, and an infamous policy of not taking photos in the actual chapel, which is bad news for anyone’s Instagram feed. So Martin decided to show the awe and wonder of perhaps one of mankind’s most remarkable artistic achievements, while allowing visitors to experience this art up close from a life-size and never-before-seen perspective.

I was fortunate to have the opportunity to visit the exhibition, Sistine Chapel by Michelangelo seen in Birmingham’s creative district known as Digbeth. This area is full of huge and dilapidated factories and warehouses, reminiscent of Britain’s colonial industrial past. A few of these have been transformed into cultural spaces for mainstream creative activities such as exhibitions, concerts, pubs and studio spaces for independent creative practitioners. Some innovative entrepreneurs also run skateboard shops, custom office supplies, and cafes, just to name a few. The exhibit on display was housed in a similar reclaimed factory called Secret Space on River Street. A guy at a ticket counter welcomed me and briefly explained the show as I entered the building. When paying for the ticket (£13) he gave me a Wi-Fi enabled audio device with extensive information on the historical and religious importance of each piece of art.

The exhibition featured all 34 Michelangelo frescoes, reproduced as licensed high-definition photographs of the originals, taken by Austrian photographer Erich Lessing, with Bridgeman Images as production partner. Sistine Chapel by Michelangelo invites visitors to step inside Michelangelo’s shoes and gain a new perspective on the artist’s most famous works of art, studying each stroke from the same distance as the incomparable artist who created them.

Entering the great hall made with a temporary split, I was greeted by: The Creation of Adam; a painting illustrating the biblical creation story from the book of Genesis in which God gives life to Adam, the first man. Adam lies casually on the left as the dynamic figure of God approaches from the right. The figure of God is depicted in front of a billowing red robe and is surrounded by many small creatures. Multiple stories are associated with this Michelangelo painting; the most widely believed, according to certain theological traditions, is that God writes on us with his finger. According to Jewish tradition, this is how he writes the tablets of the Ten Commandments for Moses. According to these traditions, the finger is the channel through which God’s intelligence, ideas and morality seep into man.

Michelangelo’s Sistine Chapel invites visitors to step into Michelangelo’s shoes and gain a new perspective on the artist’s most famous works of art, studying each region from the same distance as the incomparable artist who created them†

Then I approached Like a, one of fourteen paintings from the Ancestors of Christ series. Michelangelo’s decision to focus on the genealogy of Jesus in these paintings has given historians much food for thought. Asa was the third king of Judah and reigned between 913 and 873 BC. Next up was Josiah, who died from 640 to 609 B.C.E. the king of Judah. After his father Amon was murdered, he ascended the throne at the age of eight. Josiah was killed in battle with the Egyptians. Then I looked at the painting of Rehoboam, who is believed to be the son of King Solomon the Wise and the grandson of King David, the chief ruler of the Israelites. This painting shows a small child whose mother holds him protectively in her arms. The figure of a father is only faintly recognizable in the background. Then comes Uzziah, who is descended from the house of David – his name means “God is my strength”. Michelangelo paints the paintings of all fourteen ancestors in everyday everyday backgrounds. Salmon comes next; his name means “spark”. In the sayings of Salmon, the handiwork of women is evidence of their determination and holy life, which should be a positive presentation compared to men, who are described as passive.

The next room revealed the more significant, larger-than-life canvases, The Prophet Daniel be the first. Michelangelo’s depictions of the prophets and sibyls holding scrolls or books must be intended to symbolize their intellectual abilities and undertakings. He also portrayed the prophet Daniel, while also serving for many years as a scribe in the court of King Nebuchadnezzar II in Babylon, where he was especially prized for his ability to interpret dreams. Next to the prophet Isaiah, I saw his fingers on his right hand between the pages of his book, as if he wanted to read on. However, his attention is focused on a small figure standing behind him. These figures always appear in pairs to represent the prophets and sibyls. They are considered to be carriers of God’s message. The five sibyls painted by Michelangelo – Delphic Sibyl, Libyan Sibyl, Persian Sibyl, Cumaean Sibyl and the Erythraean Sibyl – are said to have foretold the birth of a savior.

In one painting, Michelangelo combines two scenes: on the right is the depiction of the creation of the sun and moon, and on the left there is a God pointing at green plants, painted with light brushstrokes. The next tells how God separated the earth from the waters. Michelangelo freely interpreted the individual acts of the creation of water, land, sky, light and earth and brought them together. Witness to the last series of paintings, The Creation of Eve and The Fall of Man was an overwhelming experience. The Creation of Eve is the central painting on the vaulted ceiling of the chapel. It pictures Eve trying to reach her Creator.

likewise, The Fall of Man shows the story of the first man and woman, Adam and Eve. In this painting, Michelangelo chose to combine two successive scenes. The left side of the painting shows the fall of man, with Eve taking the forbidden fruit from the serpent, going against God’s will. The painting also shows Adam reaching for the fruit of the tree. The Archangel Michael is shown stretching out his sword to expel the sinners on the right from paradise. Another exciting depiction of the prophet Zechariah is located directly above the entrance to the Sistine Chapel as he is depicted as a prized figure in the Bible, the Quran and other sacred testaments. The Great Flood shows the punishment inflicted by God for the sins of mankind. According to Genesis, God sent 40 days of rain to wipe out all life on earth and to spare only Noah and his family. He told Noah to build a boat, Ark. Noah’s Sacrifice shows Noah’s gratitude as he makes an offering to his God. The Prophet Jonah is part of a group of paintings depicting seven biblical prophets, all of whom foretold the coming of the messiah. Prophet Jonah was swallowed by a whale, but escaped after three days and three nights, the exact time Jesus spent in the tomb after his crucifixion and before his resurrection on the third day.

The exhibition ends with the special and colossal painting The final judgment painted by Michelangelo about twenty-five years after he completed the ceiling paintings. According to the New Testament, the final judgment will precede the complete renewal of God’s kingdom when Christ appears to judge the living and the dead. The scale of this fresco is smaller than the original behind the altar covering the entire western wall of the Sistine Chapel. The center of the painting shows the figure of Christ, with Mary to his left, while throngs of saints form a whirlpool with Christ at the heart.

I have visited many exhibition spaces in the past, both temporary and permanent, where one cannot escape a compliment to a curator or creative head whose immediate focus is on making it an unforgettable experience for the viewer. This traveling exhibition was certainly one of them.

The writer is an art/design critic. He heads the Department of Visual Communication Design at Mariam Dawood School of Visual Arts & Design, Beaconhouse National University, Lahore