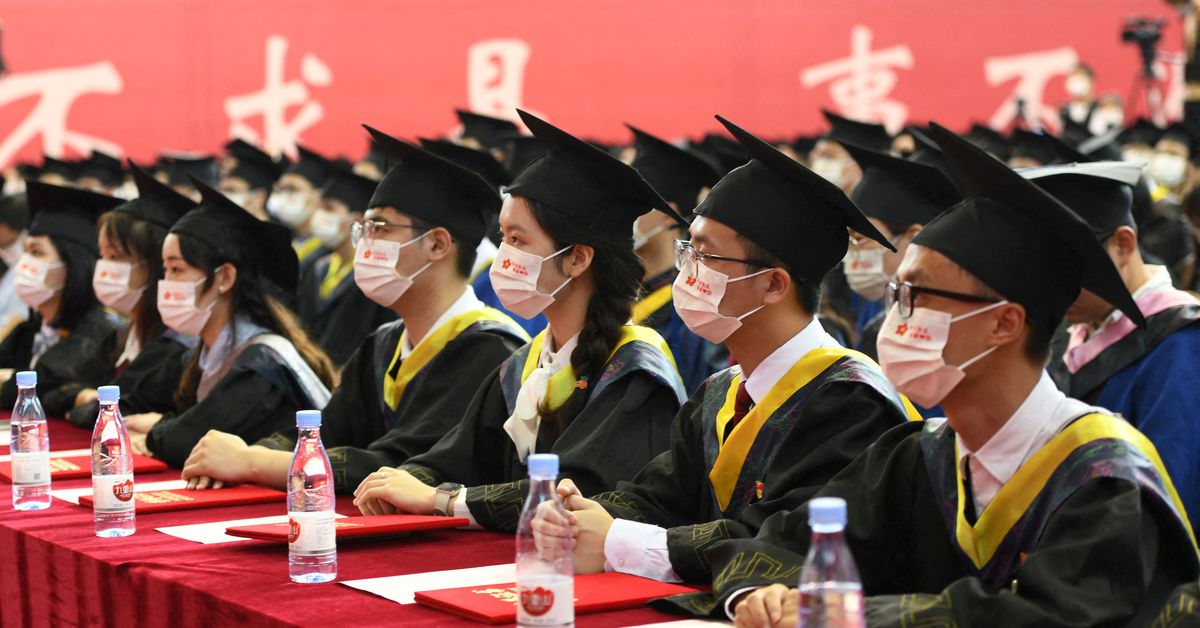 BEIJING, June 23 (Reuters) – Jenny Bai was one of 10 high-performing computer science students from several Chinese universities who were selected for a job after four rounds of grueling interviews by a Beijing-based internet company.

But last month, the company told students that their contract offers had been canceled due to the headwinds from COVID-19 and the poor state of the economy in general — obstacles facing a record 10.8 million Chinese university graduates this summer.

“I’m concerned,” said Bai, who graduated this month and didn’t want to name the company in order to stay on good terms. “If I can’t find a job, I don’t know what to do.”

China’s COVID restrictions have battered an economy already slowing due to a downturn in the real estate market, geopolitical concerns and regulatory crackdowns in technology, education and other sectors.

A cohort of graduates larger than Portugal’s entire population is about to enter one of China’s worst job markets in decades, at a time when youth unemployment is already more than three times higher than China’s overall unemployment rate, with a record 18 .4%.

There is no script for how such high youth unemployment will affect Chinese society.

Struggling to find a job goes against what educated young people have come to expect after decades of breakneck growth, and is a pain for China’s stability-obsessed Communist Party, especially in a year when President Xi Jinping is expected to enter a precedent-breaking third term of leadership. will secure.

“The social contract between the government and the people was that you have to stay out of politics and we will guarantee that every year you will do better than last year,” said Michael Pettis, a professor of finance at Peking University.

“So the concern is that once that warranty falls apart, what else needs to change?”

Prime Minister Li Keqiang has said stabilizing the job market for graduates is a top government priority. Companies that award internships to recent graduates will receive grants, among other benefits aimed at boosting employment in general.

Some regional governments have provided cheap loans to graduates who want to start their own businesses. State-backed companies are expected to pick up some of the backlog of entry-level jobs in the private sector.

Rockee Zhang, Managing Director for Greater China at recruiting firm Randstad, says China’s entry-level job market was even worse than it was during the global financial crisis of 2008-09, and estimates job creation has fallen 20-30% relative to from last year.

“This year is a low point, the lowest I’ve seen,” said Zhang, who has been a recruiter for two decades.

Expected salaries are also 6.2% lower, according to another recruiting firm’s Zhilian Zhaopin.

The Chinese Ministry of Human Resources and Social Security and the Ministry of Education did not respond to requests for comment.

The tech sector has been a major employer of many Chinese graduates, but this year the industry is cutting its workforce, recruiters say.

A regulatory crackdown prompted many of China’s tech giants, including Tencent (0700.HK) and Alibaba (9988.HK), to cut jobs en masse. A total of tens of thousands have lost their jobs in the sector this year, five tech industry sources told Reuters. According to a report published in April by NormStar, the Shanghai-based Talent Assessment and Management Consulting group NormStar, job losses varied among the roughly 10 largest tech companies in China. read more

The companies did not respond to requests for comment.

In April, a nine-month freeze on online gaming licenses for violent content and other issues was lifted, during which time 14,000 companies in the industry closed their doors. read more

New hires are slow. A human resources manager at a Tencent business unit, who asked not to be named because they were not allowed to speak to the media, said they were looking for “several dozen” new graduates, compared to about 200 a year earlier.

“Internet companies have cut tons of jobs,” said Julia Zhu of recruiting firm Robert Walters. “If they have the financial resources to attract people, they now choose more experienced candidates over recent graduates.”

“The golden age of hiring internet companies is over,” Wang said.

In China, employers often disapprove of employers who are unemployed for some time after graduation. Many families see it as a humiliation rather than bad luck with the economy.

Taking a job after completing a college degree also often triggers disapproval, so to avoid long holes in their resumes, record numbers are applying for postgraduate studies, official data shows.

Vicente Yu graduated in 2021 but has been unemployed since losing his job at a media company late last year. His savings will cover another month or two of rent and basic expenses in the southern city of Guangzhou.

“My dad told you never to come home, he said he should have raised a dog instead of me,” said the 21-year-old, who struggles with anxiety and sleeping problems.

He spends his nights on social media platforms, where he finds other young people in similar situations.

“I look at all those people who are just like me, who couldn’t find a job, and take some comfort out of it.”