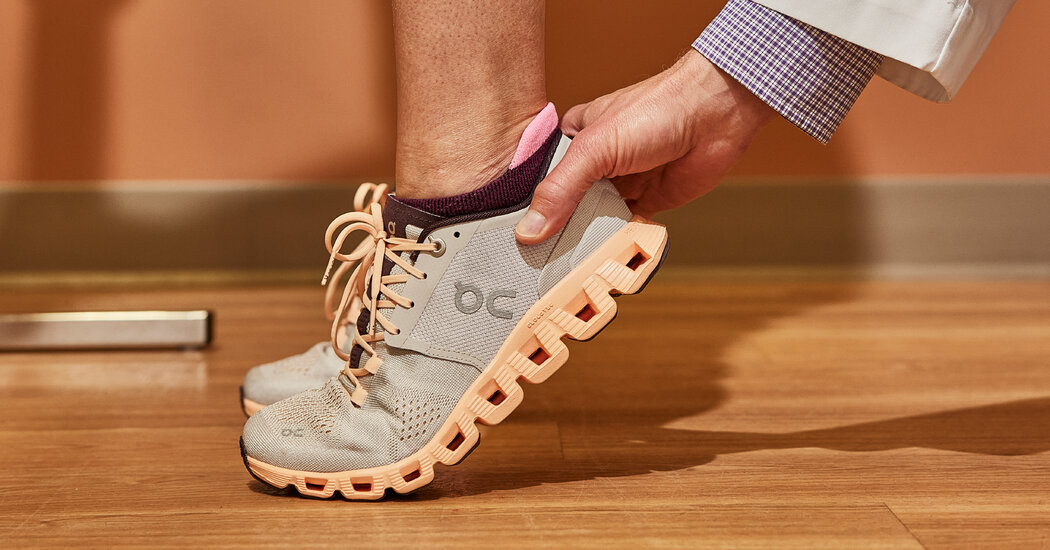 When Chris Peterson sprained his ankle while playing soccer in high school, he brushed it off as a minor injury. His ankle hurt for a few days, but no one suggested seeing a doctor, and soon felt better. “I started playing again as soon as possible,” said Dr. Peterson, now a physical therapist at Washington University in St. Louis. While his ankle didn’t hurt, it just wasn’t the same afterwards.

“I would step wrong, and my ankle just wasn’t there,” often leading to falls, he said.

Sprained ankles are among the most common musculoskeletal injuries. Official estimates are that two million people in the US sprain their ankles each year, but the actual number is likely much higher as many people never seek help for their injury.

While an ankle sprain may seem like a minor injury, the suffering leads to a much greater chance of doing it again. In a study of military cadets, those with a history of ankle sprains were 3.4 times more likely to sprain their ankles over the course of the study, compared with those with no history of ankle sprains. For an estimated 40 percent of people, an ankle sprain can lead to chronic ankle instability, characterized by repeated rolling of the ankle, a general feeling of shakyness and instability, and occasional pain, tenderness, or swelling.

If you’ve sprained your ankle in the past, it doesn’t mean you’re destined to go through life with a sore, wobbly joint, fearing it will collapse. Experts recommend a number of exercises to strengthen the ankles, which in turn reduce the chances of contracting a sprain, whether it’s the first time or the 10th.

Why many ankle injuries do not heal completely

“The biggest reason people have recurrent ankle sprains is that they never go into rehab,” says Dr. Michael Fredericson, a sports physician at Stanford University.

The ankle is an intricate patchwork of stitched together bones and ligaments, connecting the tibia and fibula of the leg to the delicate bones of the foot. It has to do a lot of work, support the full weight of the body while bending and bending in many directions at the same time. It is this versatility, along with a constant workload, that makes fully recovering from an ankle injury so difficult and critical as it is very easy to re-injure an ankle. “There’s not a lot of room for error, especially if you play sports,” said Dr. Fredericson.

The key is exercise. In a recent meta-analysis of 14 randomized controlled trials, exercise-based interventions were more effective at reducing the risk of recurrent sprains than usual care, which often consists of rest, ice, compression, and elevation.

“We do know that exercise therapy works,” said Jente Wagemans, a graduate student at the University of Antwerp and the lead author of the study. “We know it’s effective for preventing secondary injuries.”

Even the first few days after a sprain, moving the ankle can help. dr. Alysia Robichau, a sports physician at Houston Methodist Hospital, often recommends very light, non-weight-bearing activities, such as following the alphabet with your feet, in the days following a sprain. “That helps with a gentle range of motion,” she said.

Once the ligament begins to heal, which happens in the first few weeks after a sprain, the next step is weight-bearing exercise. Just like bones and muscles, explains Mr. Wagemans, ligaments become stronger when you apply more and more force.

Unlike bones, ankle ligaments need to be reinforced in multiple directions because the joint is so mobile. A simple ankle strengthening exercise is to loop a resistance band around the foot and attach it to something heavy, such as a table leg. Then bend the foot forward, back and sideways, aiming for three sets of 15 reps each.

If you’re trying to avoid ankle injuries, these exercises should be done three to four times a week. If you are recovering from a recent ankle sprain, all exercises should be performed under the guidance of a physical therapist, who will tailor them to the injury.

The risk of nerve damage

Any time you step on an uneven surface or need to place your foot quickly, tiny nerves in your ankle automatically help keep it stable instead of rolling or twisting. Think of them as the lane assistant in some cars, making small steering corrections to prevent drift, said Dr. Peterson, except the nerves bring your ankle back to a neutral position. A major cause of wobbly ankles is when sprains also damage these corrective nerves.

Balancing on one leg to train nerves

If your ankle feels shaky, unstable, or has a habit of rolling over, retrain the nerves in that area. “It’s about teaching the muscles and ligaments to coordinate properly,” said Dr. Robichau.

One of the best ways to do this is with a single leg balance exercise. To start, balancing on one leg, reach with your arms in different directions, targeting a set of 20 reps. It’s important to do a lot of varied movements, such as grabbing your hands at something, shifting your weight, closing your eyes, or even standing on one leg while brushing your teeth. “The more real it seems, the more it carries over” to everyday life, said Dr. peterson.

Once you’re comfortable with this, you can incorporate an element of instability by balancing on a sofa cushion, foam balance cushion, or Bosu ball. For an extra challenge, add a lightweight or medicine ball. Another variation is the standing leg star tap. Balance on one foot and reach with the other foot in a straight line forward, out to the sides, and back in a clockwise pattern, targeting two sets of 15 reps.

Strong muscles to support your ankles

The muscles of your legs, ankles, and feet also play an important role in ankle stability, so it’s important to strengthen them. When your ankle joint is pulled in the wrong direction, your ankle and calf muscles help pull it back. “We don’t want to rely on ligaments for everything,” said Dr. harvath.

This includes the muscles of our lower legs, which tilt our foot in, out, up and down. Strengthening these muscles can help compensate for weaknesses in the ankle ligaments. dr. Harvath recommended lunging on an unstable surface, such as a couch cushion, foam balance cushion, or Bosu ball. He recommended two sets of 15 reps for each leg.

Another exercise for your calves and ankles is the standing heel raise, which can be done with a single leg or with both legs. Stand with your feet shoulder-width apart. Just stand on your toes and lower your heels to the floor. Aim for three sets of 10 reps.

When done regularly, these exercises can both prevent injury and aid recovery. What Dr. As for Peterson, his ankle instability forced him to stop playing football and kept it up for about 10 years. It wasn’t until he went to school for physical therapy that he started his own ankle strengthening exercise routine.

Although the ligament in his ankle is still damaged, he has been able to compensate and create the stability he needs. He does all of his favorite activities, such as running marathons and rock climbing, without worrying about his ankle rolling. For many of the patients he sees, regaining strength and stability in their ankles is a matter of learning which exercises to do. “It’s often very simple,” he said.

Rachel Fairbank is a freelance science writer from Texas.