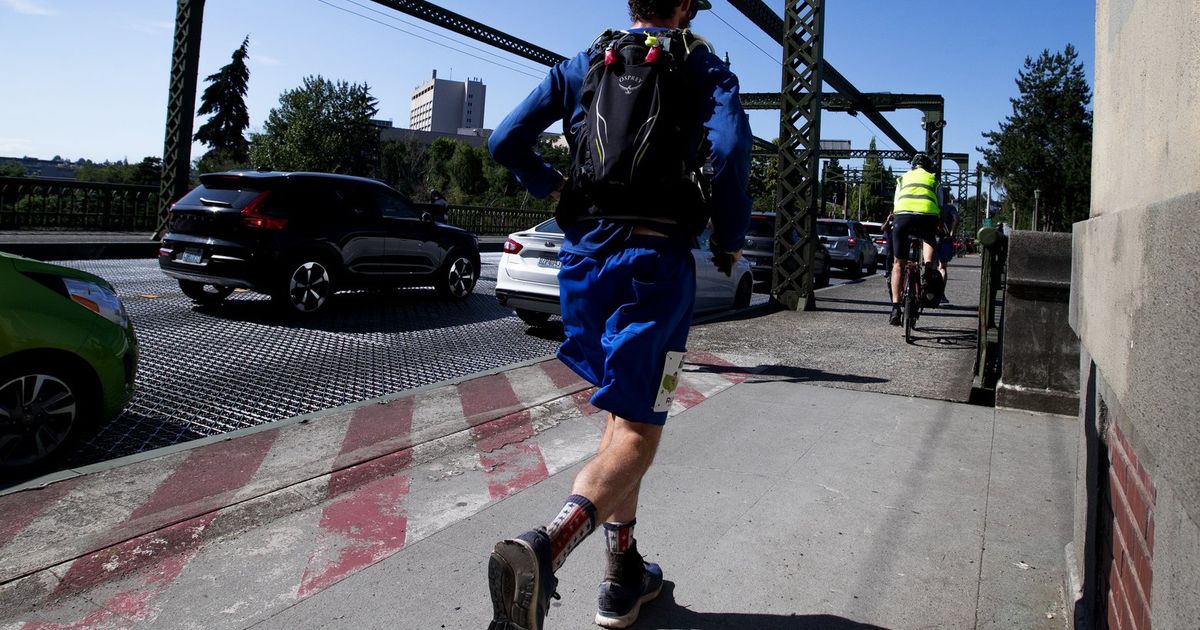 In the weeks leading up to a July 13 reunion with family and friends on the Seattle waterfront, Bainbridge Island resident Greg Nance spent 84 days battling tendonitis, hail and tornado warnings the size of a baseball while he ran from Long Island, New York, to Ocean Shores on Washington’s Pacific coast. The 33-year-old had been dreaming of the trip for almost a decade.

In February, Nance launched Run Far Foundation, an organization dedicated to supporting youth mental health. His run raised money to fund projects, amounting to more than $108,000 to add to his other cross-country stats: He crossed 14 states, walked 3,156 miles in 5,867,148 steps, burned 524,412 calories and three pairs of shoes along the way. (“Half of what I expected,” Nance said. “Brooks makes great shoes.”)

The cause is close to Nance’s heart.

“It’s personal to me because I’ve been through all of this. Anxiety and depression led me to drinking and drugging from 16 to 23,” Nance said. He knows he is not alone. “These issues of mental health and addiction and recovery affect us all, directly and indirectly.”

Nance started running on April 25 in Breezy Point, Queens, on Long Island, where he dipped his toe into the Atlantic Ocean. He then departed, through Linden, New Jersey and Levittown, Pennsylvania. Although the avid runner had trained on his legs for years, his body began to revolt. In the Pennsylvania foothills, his Achilles tendon became so tight that he couldn’t do a calf raise on his left leg. After the next 30 miles, the tendon was inflated. It was only day 4.

Taking care of your body while running an average of 37.6 miles a day — about a marathon and a half — is “a game of whack,” Nance said. Compensating for his ankle led to hip pain, which led to back and shoulder pain.

That was the first lesson of the journey. “You can’t run from this,” Nance said. “You have to run into it.”

Just keep running? Nancy could. (And yes, he heard a lot of “Forrest Gump” references as his beard grew bushier.)

A multisport athlete growing up, he fell in love with the track when he was in high school. In college, he joined the track team at the University of Chicago. But a shadow followed him – Nance drank heavily. He couldn’t finish his first season.

But he kept running and went from focusing on short sprints to distance. He ran the Chicago Marathon in October 2009 and later qualified for the Boston Marathon.

“Whoa,” Nance recalls thinking. “I’m getting better at this. This is really enjoyable.”

He became a Gates scholar and studied at Cambridge, but the pressure was mounting. He was homesick, heartbroken over a breakup and afraid of wasting his chance. Pubs helped him self-medicate his concerns, and soon Nance had blown his allowance. The provost of the university put him down and called him a disgrace. “It’s like a pile of rocks coming down on me,” Nance recalled. “I’m broke. I’m recording. I feel terrible.”

But Nance still had to run. He laced up his shoes and ran through the English countryside. His legs and lungs were burning, but he felt clearest in his head in years.

The following month, December 2011, he ran a 50k on Britain’s Jurassic Coast. That same month, he stopped drinking and taking drugs — and began dreaming about running from New York to Seattle.

In the years since he got sober, Nance has made other great feats of stamina and coordination on foot: a 155-mile run through the Gobi Desert, another across the Atacama. In 2019, he completed the World Marathon Challenge, running seven marathons in seven days on seven continents.

Despite the success, Nance still had to fight for sobriety. After the World Marathon Challenge, his race sponsor showered him with champagne. He went back to his hotel and fantasized about taking painkillers for the first time in years.

“That was really shocking, very hard to continue on the heels of this really big triumph,” Nance said.

On day 30 of its run through the US, those concerns resurfaced. In the prairies of Minnesota, Nance’s hamstring barked and his hip flexor ached with a grinding pain. His left ankle began to swell from tendonitis. This run, this big dream, may have seemed over. Every supermarket he passed tempted him to enter. “I kept thinking I could just drink half a bottle of ibuprofen and that gives me a few more hours,” he said. Those were his darkest moments. “I went looking for this old crutch, painkillers.”

Between his core running team and encouragement online, he persevered. “I ran the next 500 miles in pretty intense pain, but was able to do it on literally zero painkillers of any kind, which is one of the things I’m most proud of from the experience.”

Physical challenges weren’t the only obstacle. Nature did not have it easy for Nance either.

In Ohio, he endured 13 hours of rain that resulted in painful blisters on his feet. He ran west through Iowa and saw hundreds of lightning strikes a minute flashing a few miles north. “It’s like being in some crazy special effects movie,” Nance said. “I really can’t do anything. I have to keep going, because I want to go to a shelter or a certain amount of cell reception.’

In South Dakota, under a black sky, he ran past ancient oak trees that had been broken like matches by a tornado. The team decided to spend the rest of the day indoors (catching “Top Gun” in a movie theater, of course).

Nance was relieved to finally reach Montana when his phone buzzed with a severe weather warning urging him to take cover immediately. Baseball-sized hailstones were reported. He later met several people whose roofs had been demolished, and learned that Yellowstone had experienced highway-devastating flooding. “We drove through that. That was our first 10 miles into the corner of the state,” he said.

The highlight of the trip was the people Nance met along the way: a retired Philadelphia firefighter who said he was glad big, burly guys were starting to share their low moments with each other. An Amish jogger who had hiked the Appalachian Trail and began to share his love of adventure with his community youth. A tribal elder in the northern Cheyenne Indian reservation in Montana guiding the next generation.

A striking interaction occurred in Ohio. Nance had ankle problems and was stopped by a local sheriff. Nance moved so slowly that the sheriff didn’t quite believe he had run across the country. The area has a fentanyl crisis. “He thinks I’m a drug dealer,” Nance said. He managed Nance’s driver’s license. But the next hour, the sheriff told Nance that they don’t have many teachers or coaches in his area. The sheriff had instead taken on much of that role, working to give children around him a better future.

Nance figures fall on different sides of the political aisle; they probably had very different lives. “And yet we’re super tuned in to this and want to find ways to better support kids,” Nance said. “And that was really powerful.”

The cross-country run raised $108,844 (and counting) to support community service projects. Nance said he would like to see youth from the Seattle area, ages 16 to 23, apply for funding. $100, $200, and $500 microgrants can be used for almost anything that supports community action. Organize a picnic or concert in the schoolyard, organize a roadside cleanup or a meditation circle, plan a fun run or paint a mural. “When young people come together and do good, we think that’s the antidote to mental illness and addiction,” Nance said.

The last mile to Ocean Shores, Grays Harbor County, is arguably Nance’s favorite mile he has ever walked.

As he drove into the resort town, hundreds of people honked their horns. Bystanders pressed chocolate and water into his hands. People reached out for high-fives or held him back for hugs. A few ran with him. Then a siren started going off and he turned to see a fire truck escorting him to the shore — while his father was filming out the passenger window.

The sun began to set as he stepped onto the beach. He saw his 4-year-old and 7-year-old nieces. They had been waiting all summer to play.

“Uncle Greg, why did it take so long?” they wondered.

Next time he should just run faster.

[email protected]; Colleen Stinchcombe is a freelance writer from Seattle.