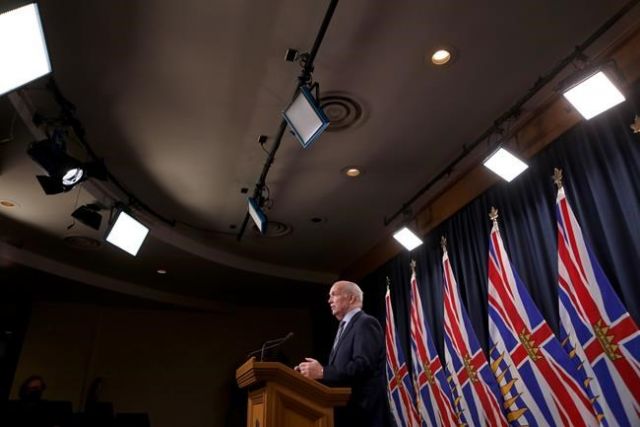 Prime Minister John Horgan answers questions during a press conference at the Legislature’s Press Theater in Victoria, Friday, March 11, 2022. British Columbia is giving $100 million in funding to address the historic mistakes it caused when it helped to intern thousands of Japanese Canadians during the Second World War. THE CANADIAN PRESS/Chad Hipolito

British Columbia is giving $100 million in funding to address the historic mistakes it made when it helped internment thousands of Japanese Canadians during World War II.

The announcement comes on the 80th anniversary of the first arrival of Japanese Canadians to the Greenwood, Kaslo, New Denver, Slocan City, and Sandon internment camps in 1942.

Prime Minister John Horgan says funds will go toward providing updated health programs for internment survivors, creating and restoring heritage sites and updating the provincial curriculum to include what he calls a “terrible chapter” in BC history.

Horgan says the recognition “should have taken a long time” and that the funding symbolizes “turning a page” in how Japanese Canadians have been treated by previous governments.

The province said in a statement that this builds on a 2012 apology by the BC legislature and is responding to a recovery proposal submitted in 2021 by the National Association of Japanese Canadians.

BC also gave $2 million to the Nikkei Seniors Health Care and Housing Society last May as a first step toward fulfilling a pledge to recognize the internment of nearly 22,000 people.

“This endowment will not change the past, but it will ensure that generations who are still with us, and those who come after, have the opportunity to see something positive come out of what is clearly a very, very dark period in our collective. was. history,” Horgan said at a news conference on Saturday.