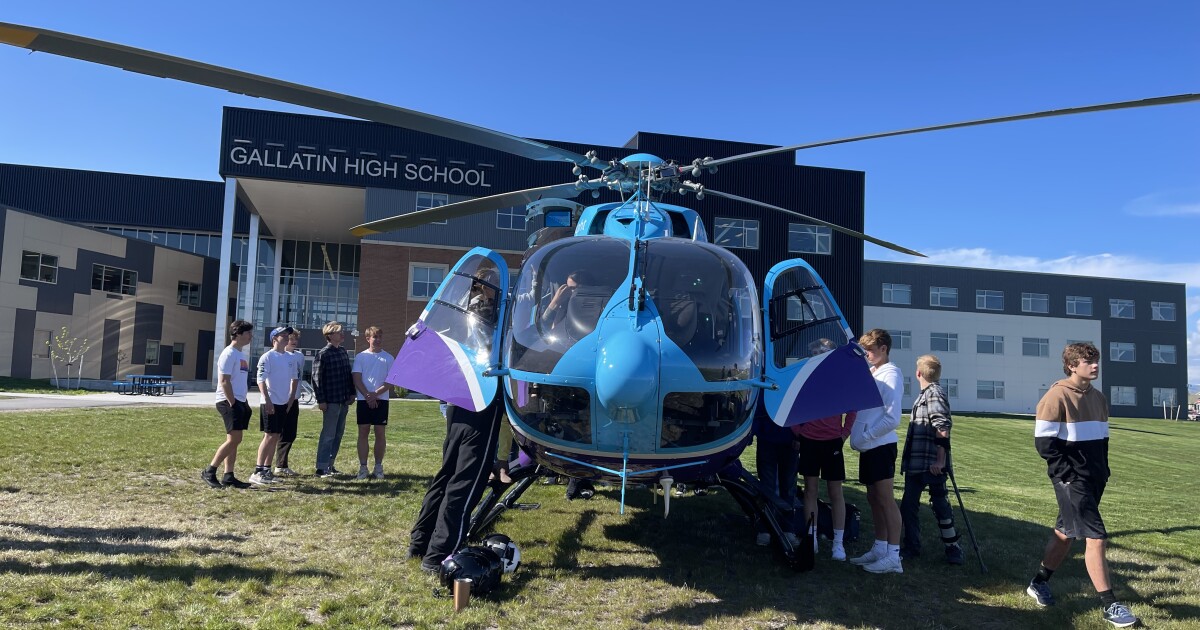 Gallatin High School students were joined on Tuesday by the crew of the Billings Clinic Medical Flight Helicopter.

The medical helicopter team attended as part of a biomedical class that began more than 10 years ago at Bozeman High School. Now at both Bozeman and Gallatin High School, approximately 300 students from 9th graders to 12th graders attend the class.

The learning opportunity landed outside Gallatin High School Tuesday morning; this was a way for students to use what they learn in the classroom and apply it in the real world, while helping them plan for the future.

“Educate our students about career paths in emergency medicine and to demonstrate some skills for our students,” said Amy Washtak, a biomedical medicine teacher at Bozeman and Gallatin high schools.

“I don’t think people know what’s out there and the different routes you could take; like, you could be a flight nurse, a paramedic, you could be a pilot — there are so many different ways you can work on a helicopter,” says Hannah Pearson, Flight Paramedic at Billings Clinic.

Not only did the students in Ms. Washtak’s biomedical class learn the science of the medical world, they also learned the possible career paths.

“Today is a great opportunity for them to merge both their interests in different career paths and skills in healthcare,” Washtak says.

Ruthie Meyer, a 9th-grader at Gallatin High, says this year has been all about disease learning.

“We learned about diabetes and different treatments for it and how to identify them all,” Meyer says.

Meyer says she had a connection with medical helicopters: Her grandfather was also a medical pilot.

“He flew Mercy Flight Helicopters in the 80s and it was really cool to learn that,” Meyer says.

For some students, at the end of their time at Gallatin High, they are ready for their college journey to begin and begin their career goals.

“My intention is to either work in public health in the nonprofit sector or go to school to become a doctor,” said Bella Childre, 12th grader.

The biomedical classroom at the two high schools has helped students like Bella develop that passion for healthcare.

“I joined biomed because I was interested in the medical field and my passion for it only grew. And the fact that as a senior in Bio-med 4, we’ve been able to learn a lot of hands-on that applies the knowledge we’ve learned before is really great,” says Childre.

The class has also been able to teach students about topics they like or dislike.

“It kind of showed me what I wanted to do,” says 10th grader Siciliy Putman.

“It showed me what I don’t want to do. I’m afraid of heights, so I’m not going to fly a helicopter, but I definitely want to help people and I think I want to be a nurse,” said 9th grader Brooke Eisenstein.

As students capture the moments on their cameras, it’s the lasting impact that will stay with them.

“Today was a great illustration of the enthusiasm our students need to learn and the opportunities we can offer them,” said Washtak.