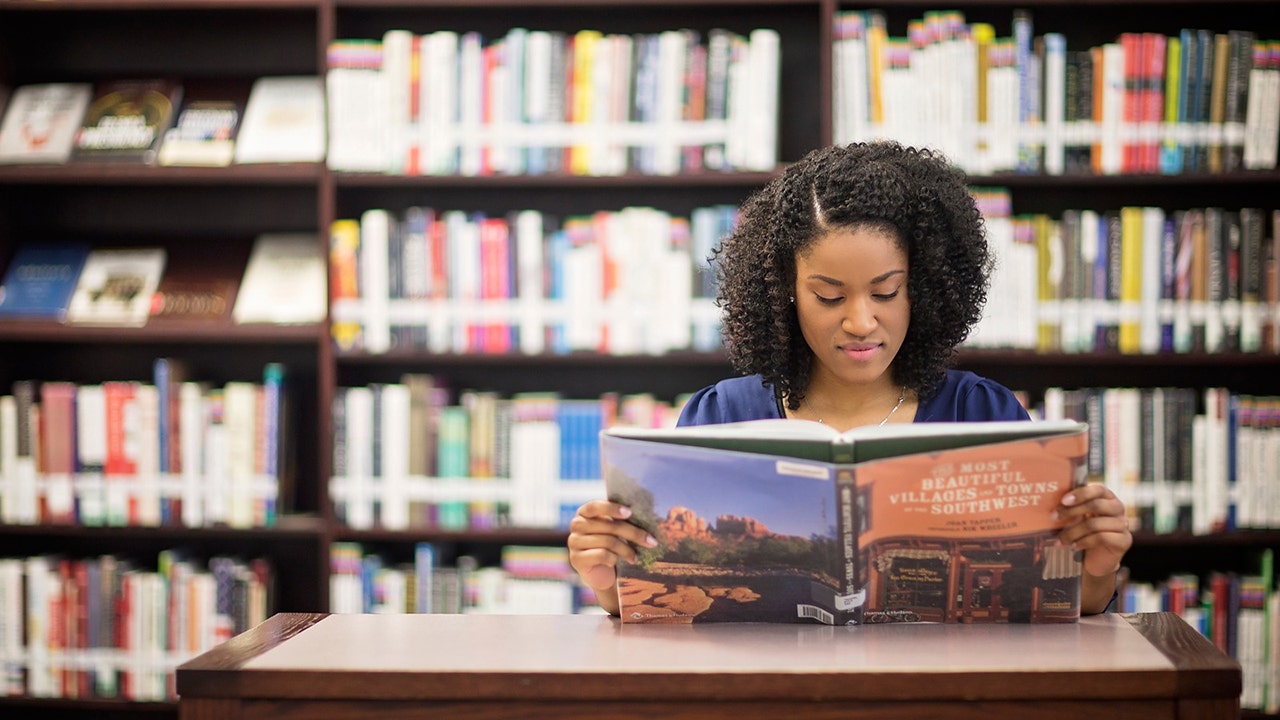 Bibliophiles who think only major cities like Los Angeles, New York City, Portland, San Francisco, Washington, DC, and others are the best when it comes to books are in for a little surprise.

Some of the book-friendly cities in the country aren’t what many expect.

A new study from rent.com ranked the best US cities for book lovers based on the offerings of each of the 116,867 libraries in the US right now.

15 OF THE WILDEST, AMAZING COLLECTION LESSONS LEARNED IN AMERICA TODAY

In addition, the top cities in this study also have their own unique literary characteristics.

Bookworms may want to “read” these cities up close — or check them out on a road trip this spring or summer.

Worthington, Ohio, was ranked as the No. 1 most readable city in the US according to this survey.

The small northern suburb of Columbus is known for its excellent library system, which consists of three locations: Northwest, Old Worthington and Worthington Park Libraries.

“We serve a community of avid readers and library supporters.”

“We were delighted to hear of this designation!” community engagement director Lisa Fuller shared this in an email with Fox News Digital.

“We serve a community of avid readers and library supporters.”

The exterior of Northwest Library in Worthington, Ohio is shown in this photo. (Worthington Libraries)

“Our buildings are buzzing with activity as we prepare for the start of the annual summer reading club,” she also said.

Worthington’s libraries offer a range of services, including a summer movie series, used book sales and author-focused events and performances – including one by Margaret Atwood, author of ‘The Handmaid’s Tale’, scheduled for June 15, 2022.

The city of Ann Arbor on a lower peninsula in Michigan is the second best city for book lovers, according to the new study; it has one of the best library systems in America.

Home to the University of Michigan’s world-renowned research program, the Ann Arbor library system — made up of five separate branches — has a total circulation of 6,907,09 items, according to rent.com.

It offers events for adults and children all year round.

Downtown Ann Arbor is home to several quaint locally owned bookstores, including the Dawn Treader and West Side bookstores, which specialize in used and rare selections.

This city came in third for the extraordinary Provo City Library in the former Brigham Young Academy building, the new study said.

Founded in 1905 and listed on the National Register of Historic Places in 1976, Provo City Library features ornate architecture—which gives the library an extravagant feel after spending $5.8 million in 1997 on renovations and conservation efforts.

A mural in downtown Provo, Utha, is pictured on Tuesday, January 22, 2018. (Photo by Evan Cobb for The Washington Post via Getty Images)

The library with 1,589,375 in total circulation offers an exhibition space and art gallery, as well as several large spaces. These include a ballroom, which is available for reservation.

Library director Gene Nelson confirmed in an email that the Provo population is made up of “many” book lovers, all starting with the youngest generation.

THESE ARE THE TOP 5 US CITIES FOR BRUNCH, PLUS SOME HIGHLY RECOMMENDED RESTAURANTS

“Our primary goal for producing and serving 30 regularly scheduled stories for children per week is to encourage a love of books, reading and the library,” he wrote.

“About 50% of our total print run comes from our children’s library.”

Independent Provo bookstores such as Pioneer Book and Eborn Books have also been hailed as community favorites for their wide variety of rare and general selections.

Hoover, Alabama, came in fourth for its library that is more than just that.

Hoover Public Library lives up to its motto ‘We are more than a library’, with its unique offering. These include a professional theater with live performances; a technology training center; family activities; and a cafe.

Teens gather around a laptop while enjoying a drink at the Hoover Library cafe in Hoover, Alabama. (Hoover Library/Lance Shores)

Library director Amanda Borden told Fox News Digital that Hoover residents know they have a “very special library” as part of their community. She said the library’s success is due to its commitment to public service.

“From choosing books to scheduling programs to hiring staff, everything we do revolves around customer service,” she said. “We often say, ‘We like books, but we like people.'”

“We’re very focused on the future and finding ways to keep our library relevant,” she continued. “Our culture is one of innovation, creativity, exploration and saying ‘YES’ whenever we can.”

With a total circulation of 1,650,847, the library just south of Birmingham brings it all home with free “Love on the Plaza” music events and game nights.

In Chicago’s western suburbs, Naperville, Illinois is acclaimed for its acclaimed schools and competitive library system.

The Naperville System, which consists of the Nichols, 95th Street, and Naper Boulevard Libraries, has taken the unique approach to eliminate delinquent fines on library books and other media.

The library claims on its website that the lax system has allowed customers to experience “more flexibility” and better customer service.

With a total print run of 3,905,798 items so far this year, customers have saved a total of $9,967,242 by checking out items rather than purchasing them, the Naperville Library says.

The bookstore is known for hosting authors from all over the world.

But Naperville is also known for the popular Anderson’s Bookshop, which has been selling books independently since 1875. It was named Naperville Chamber of Commerce’s small business of the year in 2010.

Along with other awards and recognitions, the bookstore is known for hosting authors from all over the world.

Ginny Wehrli-Hemmeter, director of events and marketing at Anderson’s, told Fox News Digital how much the family bookstore means to the community.

“We’re very much a part of Naperville’s history,” she said.

“It’s important to us what kind of community we represent in our bookstore. So we’re proud of that.”

“We’ve had several generations of people growing up and going to Anderson’s to find their next great book.”

“Community is important to us,” she added.

“So many of us who work here, live here, grew up here… It’s important to us what kind of community we represent in our bookstore. So we’re proud of that,” she said.