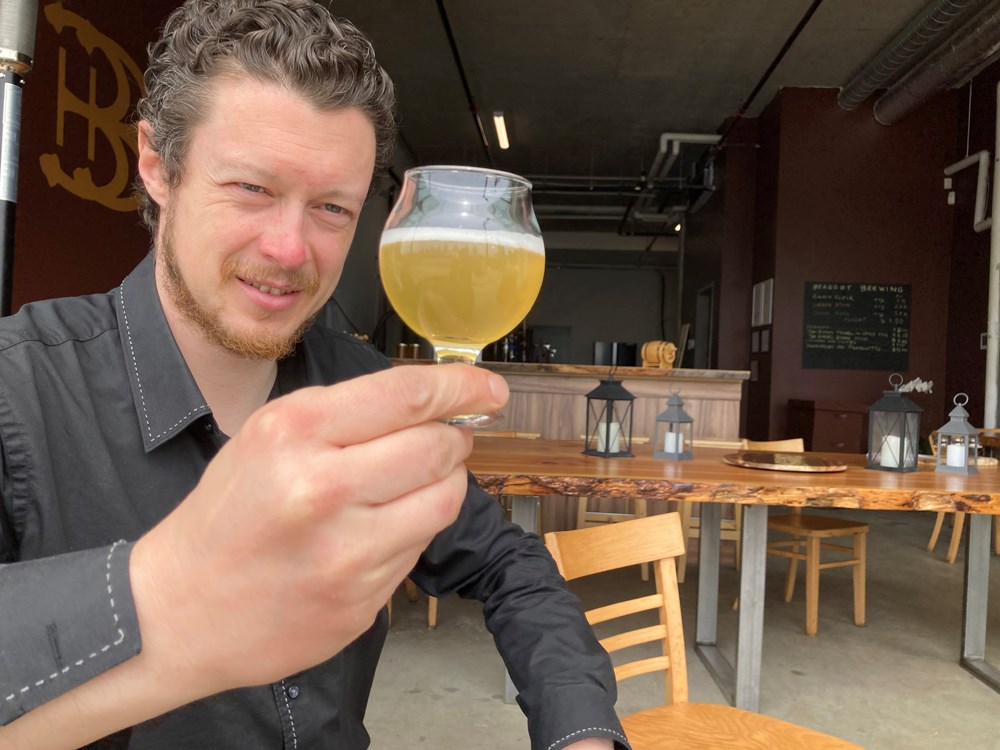 The newest addition to North Van’s brewing district offers braggot, an alcoholic beverage that falls somewhere between beer and mead.

The newest addition to North Vancouver’s brewing district brings something new, which is also something very old, to the exploding craft beer scene in Lower Lonsdale.

Braggot Brewing opened last month and they specialize in an old alcoholic drink that shares the brewery’s name. Brewery owner and driving force Enrico Bovero explains that braggot, also known as bragwad, is one of the oldest known forms of alcoholic drink, made by fermenting honey and grains together.

The resulting brew is somewhere between mead and beer, a naturally fizzy drink with fine bubbles, thick foam and a color that can vary widely depending on the type of honey and malt used. Braggot Brewing currently produces three varieties: gold, amber and dark. The gold is made with light honey and malt, the dark with dark honey and malt, and the amber that comes somewhere in between.

Bovero is a chemist by trade, so he knows a thing or two about perfecting a process, but he has deep roots in farming and brewing dating back to his upbringing in northern Italy. His family has been making wine for generations, he said, and he is equally passionate about his favorite drink.

“This is a very old drink,” he said. “It’s actually much older than both beer and mead. It dates back to a time when there weren’t enough grains to make pure beer, and not enough honey to make pure mead. And so people mixed from multiple sources, and the obvious result was this drink called boaster. That’s where the word brewing comes from.”

The alcohol content for Braggot’s three offerings ranges from 5.0 to 6.8, and the flavors match the variety. The dark is reminiscent of a strong beer with similar malts, while the golden and amber varieties offer lighter flavors that are still full of interesting flavors.

The flavors are very tied to the land through the use of honey harvested from Bovero’s own beehives kept in Delta.

“Some people say that in wine you can taste the flavors of the land because it’s influenced by the plants that are around it,” he said. “This is even more true of something like braggot, because it’s not just affected by the presence of plants – those plants are in the braggot, because the bees naturally start collecting nectar from clover, from dandelion, from cherries, and then those pollen and that nectar, the substances from those plants, end up in the honey, which we keep unfiltered and unpasteurized in our scooper. Our scooper really has a flavor profile that is unique to the country, unique to this particular location.”

The bees that provide the honey for the braggot have a special place in Bovero’s heart.

“The bees have put in a lot of effort,” he said. “We want to do justice to the product, the honey, which is naturally present in the drink. We don’t want to have too many fancy recipes, we want to keep it pure with the taste of the honey and the taste of the malt.”

Bovero is equally passionate about running an eco-friendly business. For example, his spent grains go to a farm in Langley where they are used as animal feed.

The result of that effort is a truly unique business and drink, a new addition to a neighborhood that already boasts more than half a dozen craft breweries, distillery, winery, and cidery. And while Braggot Brewing is new to the area, the booze on tap, poured straight from the tanks, is older than anything else you’ll find in the Brewery District.

“We’ve lost the memory of what beer once was,” says Bovero, adding that he wants to reclaim those pure, old flavors. “We try to make it as authentic as possible.”

Braggot Brewing, which offers braggot and snacks in the tasting room and patio, is located at 370 Esplanade East in North Vancouver.