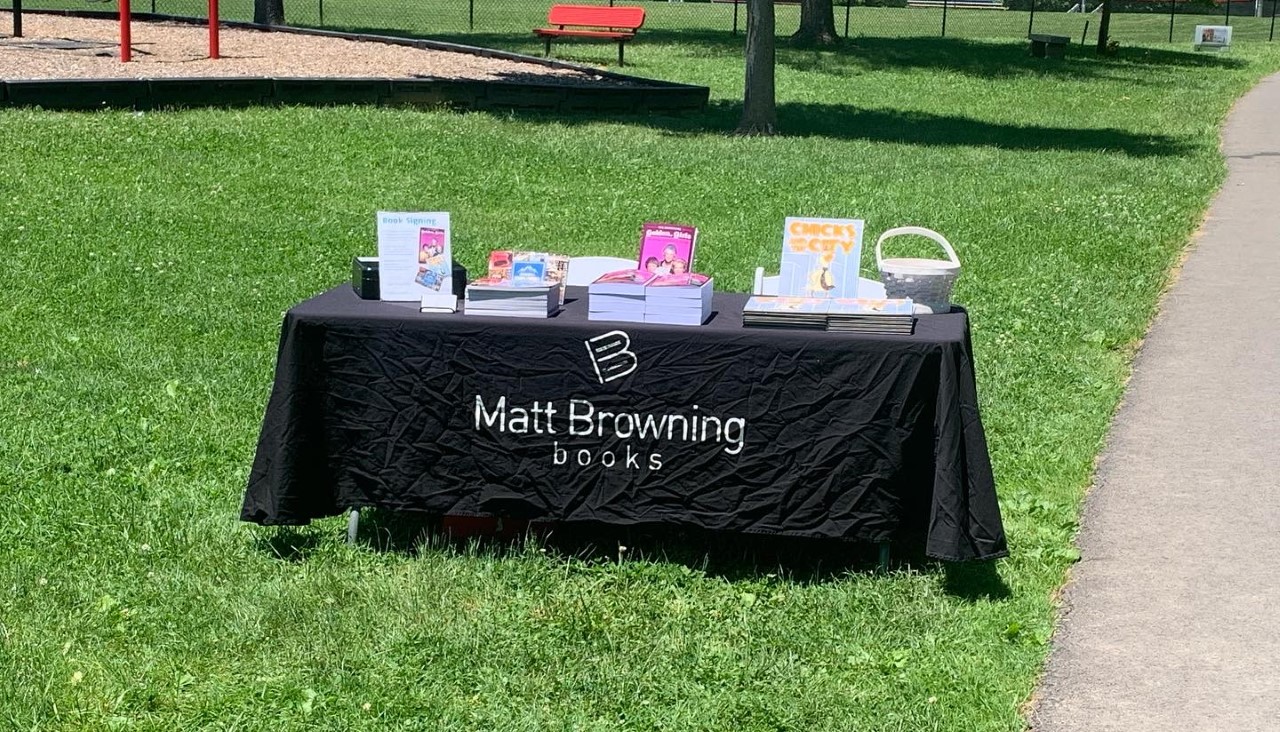 Melanie Groves, the Bridgeport StoryWalk coordinator, contacted Browning about his children’s book, Chicks and the City, and asked him to join her StoryWalk for the month of June. He was more than honored to be from Charleston, W.Va. drive to show his book.

The book signing began at 1:00 p.m. in the park, where every page of his book was put on signs to walk the trail and read. Several children and families took a walk to read or scan the QR codes to listen to the book.

There was even a little girl who took her pet chicken to the walk to represent the chicken in the story. She read to her chicken at every sign and said she loved to read to her other chickens too.

The book is about a chicken named Stu, who finds himself in the city and becomes overwhelmed. He soon finds his way through the city and finds a great outcome in his journey. Inspiration for this book came to Browning during his previous job in marketing for an urban farming event. They developed the chicken with a tie as their mascot, he then started coming up with a backstory for “Stu” and realized that “there’s a story in this somewhere”.

Browning had a certain opinion that his book was chosen for the StoryWalk. He said, “You know, I’m such an honor to be asked, but to be here today and see it in person is just such an icing on the cake for me. Because I’d never heard of a story walk, but I had never been here to see one myself. So to walk around and look, and here are the pages of my book. You know, for all the world to see and enjoy, is really, really humble.”

He has two other books called “Bookstore Explorer: West Virginia” and “The Definitive Golden Girls Cultural Reference Guide.” If you are interested in purchasing any of his books, you can find it on his website.

Bridgeport StoryWalk had exciting news to share on Saturday. They received a generous donation from a sponsor to help get more resilient page holders on track.

The next StoryWalk will be held in the first week of July, with Morgantown lead author Cathy Bonnstetter.

To stay informed about when future StoryWalks will be held, click here.