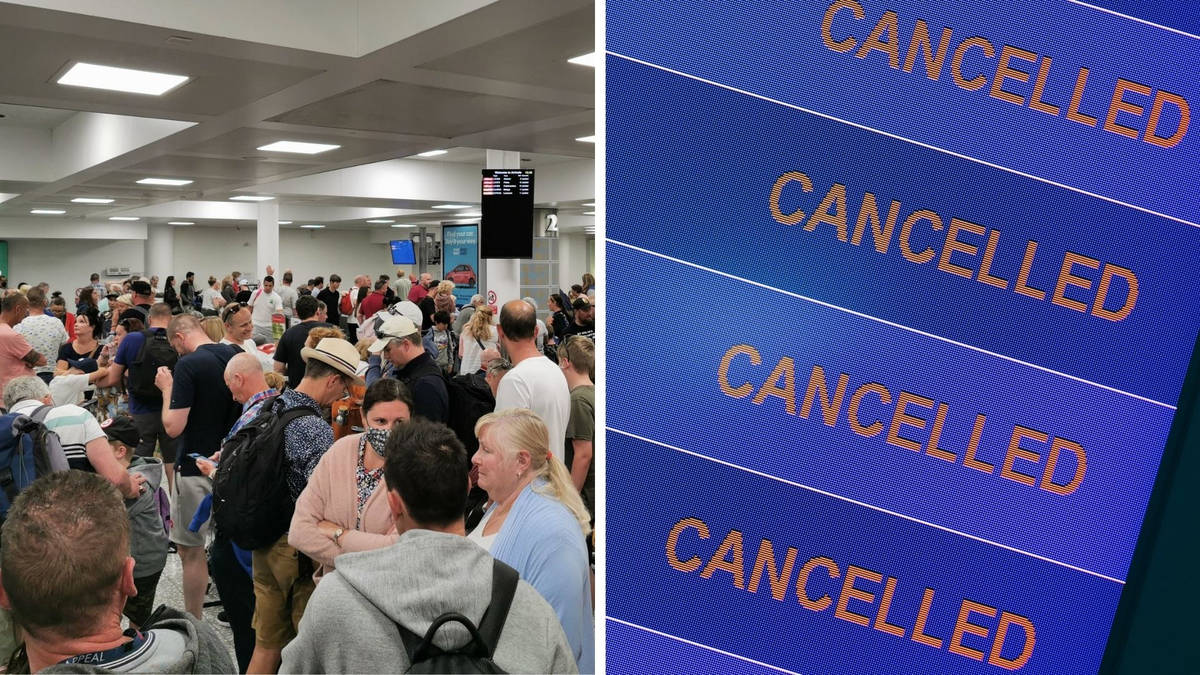 The chaos at the airports continues into the holiday weekend as thousands of Britons rush from their holidays.

Frustrated travelers had to wait hours for their luggage at UK airports on Saturday as the holiday season drew to a close.

Airports were said to be preparing for their busiest weekend since the start of the pandemic, but airlines continued to struggle with increased demand.

Meanwhile, another user on Gatwick said: “1.5 hours delay getting to #Gatwick from #Milan this morning. Delays getting off at #Gatwick. Now even more delays getting our luggage. Absolute joke!”

It comes after Ryanair boss Michael O’Leary said people should stick to “hand luggage only” to speed up the process.

“My tip would be to travel during the week, because you will almost certainly have no problems and will only be traveling with hand luggage,” he told the Times.

“This reduces the time you spend in airports. Buy socks and jocks and stuff when you get there.”

At least 20 easyJet flights have also been canceled after days of delays and cancellations by airlines.

The budget carrier confirmed on Saturday that “a small fraction” of flights had been cancelled, largely pointing to problems at London’s Gatwick and Schiphol airports.

At Gatwick, a total of 20 flights were declared canceled and 17 as delayed on Saturday.

A further 16 flights urged passengers to contact easyJet, suggesting they too were cancelled.

British Airways, Wizz Air and Vueling were among others airlines with canceled or delayed flights from Gatwick, but the numbers were significantly lower.

An easyJet spokeswoman said the current “challenging environment” in the airline industry has led to more disruptions during the busy holiday season.

“EasyJet will operate approximately 1,700 flights serving approximately a quarter of a million customers each day over the holiday weekend, with a small fraction canceled last week or overnight and informed (passengers) of their options to rebook or obtain a refund. received,” she said.

“Airlines continue to operate in a challenging environment, including with restrictions on air traffic control operations operating at London Gatwick today and issues with ground operations at several airports, including Amsterdam, where the airport has requested airlines to cancel some flights today.

“As a result, a small portion of the extra flights today may be disrupted.

“We fully understand the inconvenience this will have caused our customers and we are very sorry.”

A spokesman for Gatwick Airport said air traffic control restrictions are largely due to weather and staffing problems across Europe, and the airport is not alone in facing difficulties.

He said: “Bad weather conditions and air traffic control problems across Europe are limiting the number of flights that can use European airspace and causing significant delays and some cancellations at Gatwick.”

Passengers planning to use the holiday for an overseas holiday were beset by travel chaos this week, with airlines also canceling more than 150 UK flights earlier on Wednesday.

The airline industry faces staff shortages after letting thousands of people go during the Covid pandemic.

In response to the growing crisis, the government has met with leading aviation industry leaders, including airports, airlines and ground handling companies.

Transport Secretary Grant Shapps told the group heads that airlines affected by cancellations “need to learn” from those who have continued to provide smooth service.

He called on holiday companies to “do their part” and warned that a desire to come back after the pandemic was “no excuse” to overbook and cancel flights.

Mr Shapps also warned industry leaders that airlines must stop selling tickets on flights they cannot man after staff shortages at airports and airlines were blamed for the travel chaos.