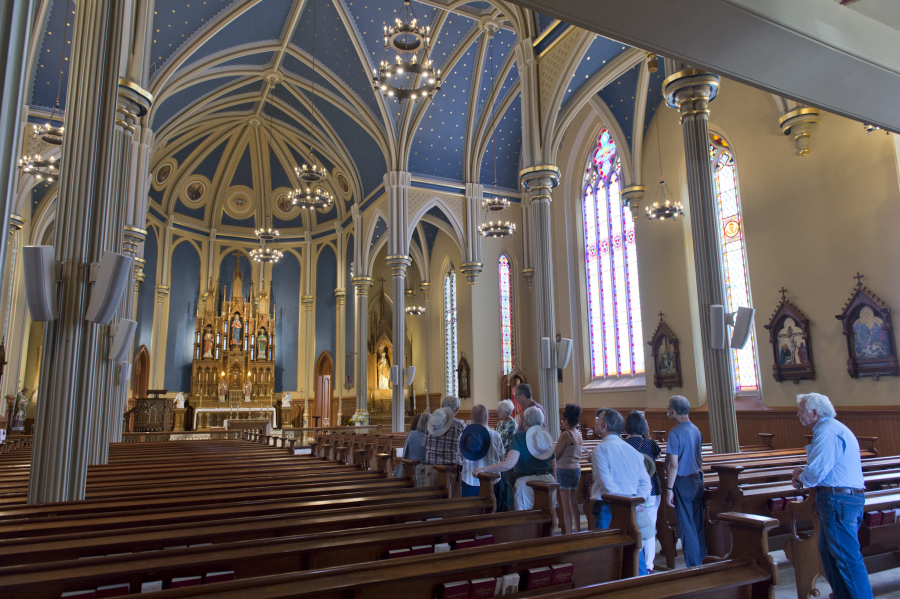 There are not many buildings in Vancouver like the Proto Cathedral of St. James the Greater on West 12th Street. The church’s pointed arches, steep gabled roofs and stained glass windows stand out among the modern brick and glass office buildings and high-rises that dot the center.

Amy Parent, whose official title is Pastoral Assistant for Faith Formation but who describes herself as the Religious Education Coordinator, treated about 20 Angora Hiking Club members and guests to a bit of church history before giving them a tour of the church. holy church of the church. art and treasures.

The Proto-Cathedral of St. James, built in 1885, is an example of Gothic Revival architecture. The architectural style, which reached its peak in the early to mid-19th century, was commonly used in churches, schools, and even rural homes. The graceful, complex styles were inspired by medieval design and were a notable departure from the previously popular styles inspired by ancient Greece and Rome.

Why did so many Catholics come to Vancouver? Elder said having an existing church — the smaller St. James Church built in Fort Vancouver in 1846 — was a draw, but there was another reason as well.

“They also came to explore the wilderness of the Pacific Northwest,” Parent said.

One of the most common questions asked to parents is: What is a proto-cathedral? She explained that “proto” means it was a former cathedral.

“In 1907, Bishop O’Dea moved the cathedral to Seattle,” Parent said, which also meant moving the cornerstone of the church to Seattle. “It’s sad it had to be moved, but he was smart because Seattle got a lot bigger than Vancouver.”

The items viewed during the tour include dozens of artworks that founder Bishop AMA Blanchet brought back from his travels to raise money for the church. Among them were several paintings (later discovered to have been painted on vegetable bags in Mexico), statues, and robes.

There’s one item that many who visit the church won’t see: a 33-star American flag that was found crumpled in a corner during one of the renovations. The 33-star version became the official flag of the United States on July 4, 1859, after Oregon was admitted to the Union. Elder said the flag is not among the sacred items on display at the church, as it is a secular rather than a religious item.

A trip to Vancouver to visit a former cathedral may not seem like the right choice for a walking club, but for club president Craig Holt it was a great day trip.

He said he especially liked going up the spiral staircase to see the church organ and pipes, and the former bell room that housed a handful of orphans in the late 1800s.

“I’m surprised they didn’t have any bells,” said Holt.

While the church used to have bells, the tower now houses an electronic bell system. One of the original bells now stands outside the church.

Holt said he grew up in Chicago and often visited Rockefeller Memorial Chapel. He also studied at the University of California Berkley, known for its carillon bells, which sparked his interest in them.

The Angora Hiking Club – located in Astoria, Oregon – will celebrate its 102nd anniversary on July 4. As the name suggests, many of the club’s adventures revolve around walking, be it a city walk along a waterfront or the Fort to Sea trail. at Fort Clatsop. But the club’s adventures aren’t just limited to hiking. Previous activities have included skiing, horseback riding, swimming, mushroom identification and more.

Rudi Fruth and his wife, Maria, traveled from their home in Ridgefield for the tour after seeing an article in the newspaper.

“I always heard the name Proto Cathederal and wondered what a proto-cathedral was,” said Rudi Fruth. “I’ve read about this church a number of times, so this came at the right time.”

Fruth said he and his wife recently returned from a trip to England, where they visited several cathedrals.

‘Why are we going all the way there? This is beautiful,” he said.

“I heard about it and thought it would be a great thing to do, to just familiarize yourself with Vancouver, what’s in it,” says Vancouver resident Penny Slater.