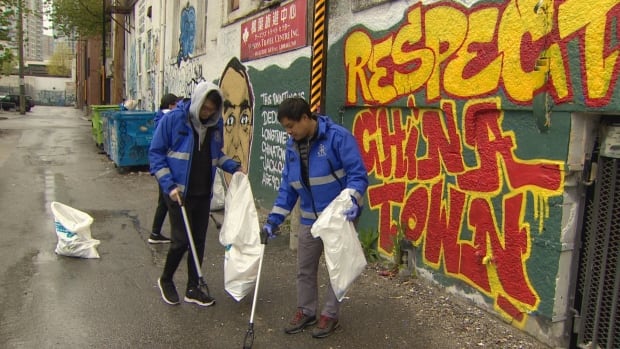 About 100 people marched through Vancouver’s Chinatown with garbage bags and pliers on Saturday afternoon in an effort to clean up the neighborhood.

Organized by the Vancouver Chinatown Business Improvement Area Society and the Chinatown Merchants Association, the annual Chinatown clean-up campaign aims to preserve the neighborhood so that it is a “desirable and dynamic” place to visit, according to a written release.

The event comes amid ongoing struggles for small businesses and residents in the area who have faced a rise in anti-Asian hatred during the pandemic.

“We have issues where seniors are sometimes afraid to walk around their own neighborhood.”

A few weeks ago, a dozen volunteers helped restore a mural on the side of the Liang You Bookstore on East Georgia Street, which had been damaged in late March.

In January, the exterior walls of the Dr. Sprayed Sun Yat Sen Classical Chinese Garden, while the windows of the nearby Chinese Cultural Center were smashed.

Jordan Eng, president of the Vancouver Chinatown Business Improvement Area Society, says that while the neighborhood has struggled in recent years, he has noticed more families visiting the area now that COVID-19 restrictions have been lifted.

“It’s really good to see the streets starting to fill up,” said Eng.

Eng says the large turnout for the cleanup event shows that people care about the neighborhood.

Great to see over 100 people showing up in #Chinatown to help clean up and make residents feel safer. #EverybodyPlaysAPart #PublicSafety #seniors pic.twitter.com/XMDaOIWV4F

Janssen Ong, one of the volunteers and the executive director of the Chinese Community Policing Center, says the event is important because it will help bring back the vibrancy of the neighborhood and restore Chinatown’s culture.

The center works with the Vancouver Police Department, community partners and volunteers to reduce crime and improve security in Chinatown.

Ong is also part of a new effort to clean up the neighborhood on a regular basis.

The police center will start a new pilot project in June with the aim of cleaning up graffiti in Chinatown.

He hopes more volunteers will come to keep the neighborhood clean.

“I think that would be really meaningful and fun.”