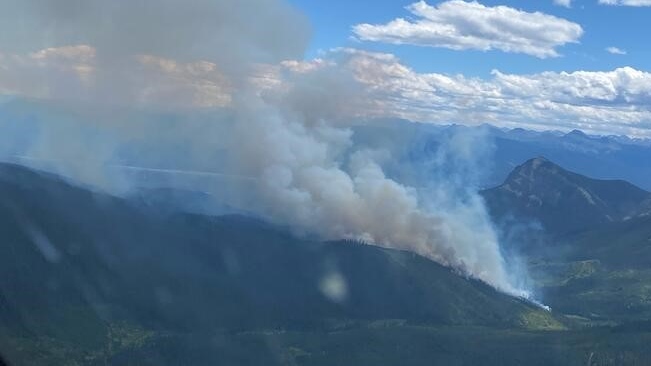 An evacuation order was issued Wednesday evening for Clearwater County due to a 200-acre wildfire about 12 miles west of Nordegg.

April Macintosh and her family had planned to camp at Dry Haven Campground on Wednesday and Thursday, but were able to see smoke and flames when they arrived late Wednesday afternoon.

“Everyone got pulled over so we stopped and had a look and suddenly a small fire started to grow and grow and you could see the bombers flying overhead,” she recalls.

“So it was within a matter of minutes where we were like, ‘It’s going to get really bad, we need to take off.”

When the Nordegg family left, they could see the sky change color in the rearview mirror.

Residents and visitors to those areas had to leave immediately. They could move to North Saskwatchewan River Park at Rocky Mountain House if necessary, according to a warning from the county system.

“They were all concerned about the animals and the people. I think people left their campers behind. And that would be us if we hadn’t gone,” Macintosh noted.

A two-hour evacuation warning was also issued for Nordegg. Residents and visitors were told to leave within two hours of being notified.

“Today it has seen some pretty significant growth. It is now over 200 acres and has escaped containment, so unfortunately it is expected to continue to grow,” he told CTV News Edmonton in a Zoom interview.

“Certainly, the heat, lack of relative humidity, as well as today’s winds were big factors in the growth of this wildfire.”

Firefighters from all over Alberta and possibly BC are expected to assist Thursday morning.

The fire started on July 19, northwest of Nordegg. The fire was initially thought to be under control, Fairweather said, but hot, dry winds spread the fire.

“That’s just a reminder that every time we see these hot and dry conditions, wildfires can start quickly, start easily and spread quickly, and that’s why we need to be extra careful to eliminate man-made wildfires that are be completely preventable.” he added.

The cause of the fire is still under investigation.

Fairweather said the forecast could mean more fires this summer.

Visit alberta.ca/Wildfires and alberta.ca/BePrepared to learn how to prepare for a wildfire.