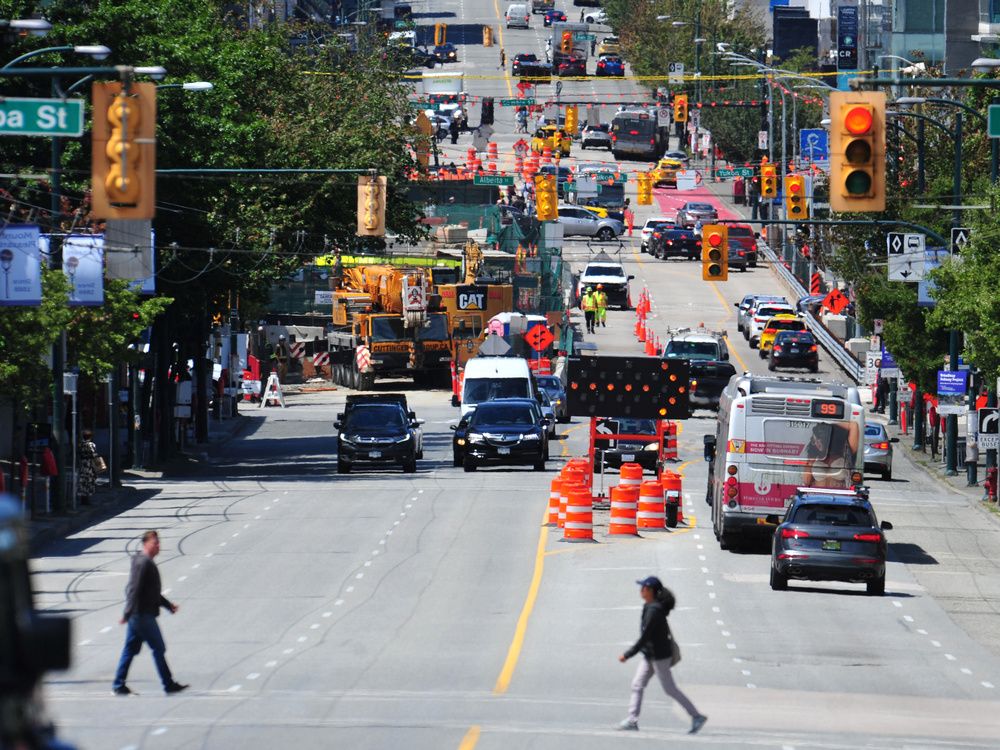 The Vancouver City Council approved the controversial Broadway plan late Wednesday night, after defeating a bid to consider the whole issue until after the next election.

Mayor Kennedy Stewart, who spoke out in favor of the plan, described it as “a great plan” to grow the Broadway corridor into “one of the most exciting neighborhoods in the country,” dramatically increasing the number of homes — especially for tenants – while also aiming to protect existing tenants.

But TEAM Coun. Colleen Hardwick, who was highly critical of the plan, predicted the extra density will lead to tenant displacement and higher rents and house prices, saying it “promotes a false story of lack of supply.”

After the vote, Hardwick said that if she succeeds in her mayoral nomination this year and TEAM wins a majority on the council, they would “absolutely” try to withdraw the Broadway plan.

Along with Stewart, seven other councilors generally supported and voted in favor of most parts of it: Green Councils. Adriane Carr, Pete Fry and Michael Wiebe, OneCity Coun. Christine Boyle and ABC Councils. Lisa Dominato, Rebecca Bligh and Sarah Kirby-Yung.

Along with Hardwick, NPA Coun. Melissa De Genova and COPE Coun. Jean Swanson said they would not support the plan and voted against most parts of it.

Earlier on Wednesday, the council rejected Hardwick’s attempt to postpone the plan until after the October election. By the end of a sixth day of public meetings on the matter, she suggested returning the entire plan, with amendments, to staff to “create neighborhood-based planning with affected communities and return it to council for consideration after the 2022 city council election.”

Hardwick’s proposal to delay a decision on the plan was supported by Wiebe and De Genova. But the rest of the council voted against the postponement and a heated discussion ensued.

The plan envisions an area of ​​nearly 500 city blocks along the Broadway subway line, which is under construction, over the next 30 years with a view to increasing the population of the corridor described as the “second center of Vancouver.” It charts a course for additional density in the area, where City Hall expects the population to grow from about 78,000 residents to a staggering 128,000, and from 84,000 jobs to closer to 126,000.

More than 200 people signed up to speak to the council about the plan, one of the highest single item totals in recent history, and the council heard passionate arguments for and against.

Hardwick said the fact that councilors had prepared more than 40 amendments to the plan showed it was “not ready for prime time”.

Referring the plan back to staff, Hardwick said, “the new council can get on with it with fresh eyes and a fresh attitude. … We’re trying to ram it through before the end of our term, and that’s inappropriate.” .”

Other councilors disagreed that anything was being hammered through, as the plan had taken more than three years of staff work and public consultations.

“What’s behind this reference?” asked Blig. “Reality is the mover of these referral voices against 90 percent of development.”

Hardwick objected to that characterization of Bligh. The two councilors ran together under the NPA banner in the 2018 elections, but will represent different parties in the October elections.

Stewart said: “It’s not really a reference being discussed here, it’s the whole concept of the plan. So I’d say don’t refer it, vote against it. I don’t think a referral is really what’s being discussed here, I think if there are fundamental issues with this plan, referring it back isn’t a public service.”

“I agree with the Graaf. Bligh, if you’re against the Broadway subway, and the expansion into UBC, and 90 percent of the things that come to the board, then of course you’re against this plan,” Stewart said. “But really state your intentions, don’t pretend you’re doing that with a referral. Just vote against the plan.”

Hardwick objected, saying “I feel I have been vilified by two councillors”, namely Bligh and the mayor.

Stewart replied that citing a councilor’s vote on public affairs was not the same as defaming someone.

Carr, who chaired the meeting, urged councilors to treat each other with respect, even when they disagree.

The plan has been described by supporters and opponents alike as one of Vancouver’s biggest urban planning decisions in at least a generation.

Brent Toderian, a former chief planner for Vancouver, argued in a recent Vancouver Sun commentary that the plan’s vision for a denser, transportation-focused future is necessary for the city to overcome interconnected crises in housing, climate, social justice. , public health, and infrastructure.

The Broadway plan is daring, which is one of the reasons it’s controversial, Toderian wrote, “but it’s what absolutely has to happen if we care about the future and are willing to support our own rhetoric.”

Other prominent voices disagreed. In another comment from Vancouver Sun this week, David Ley, professor emeritus of urban geography at the University of BC, predicted the plan will lead to increases in land values, the loss of existing affordable rental housing and the displacement of tenants living there. Today.

Sign up to receive daily front page news from The Province, a division of Postmedia Network Inc.

The next issue of The Province Headline News will be in your inbox soon.