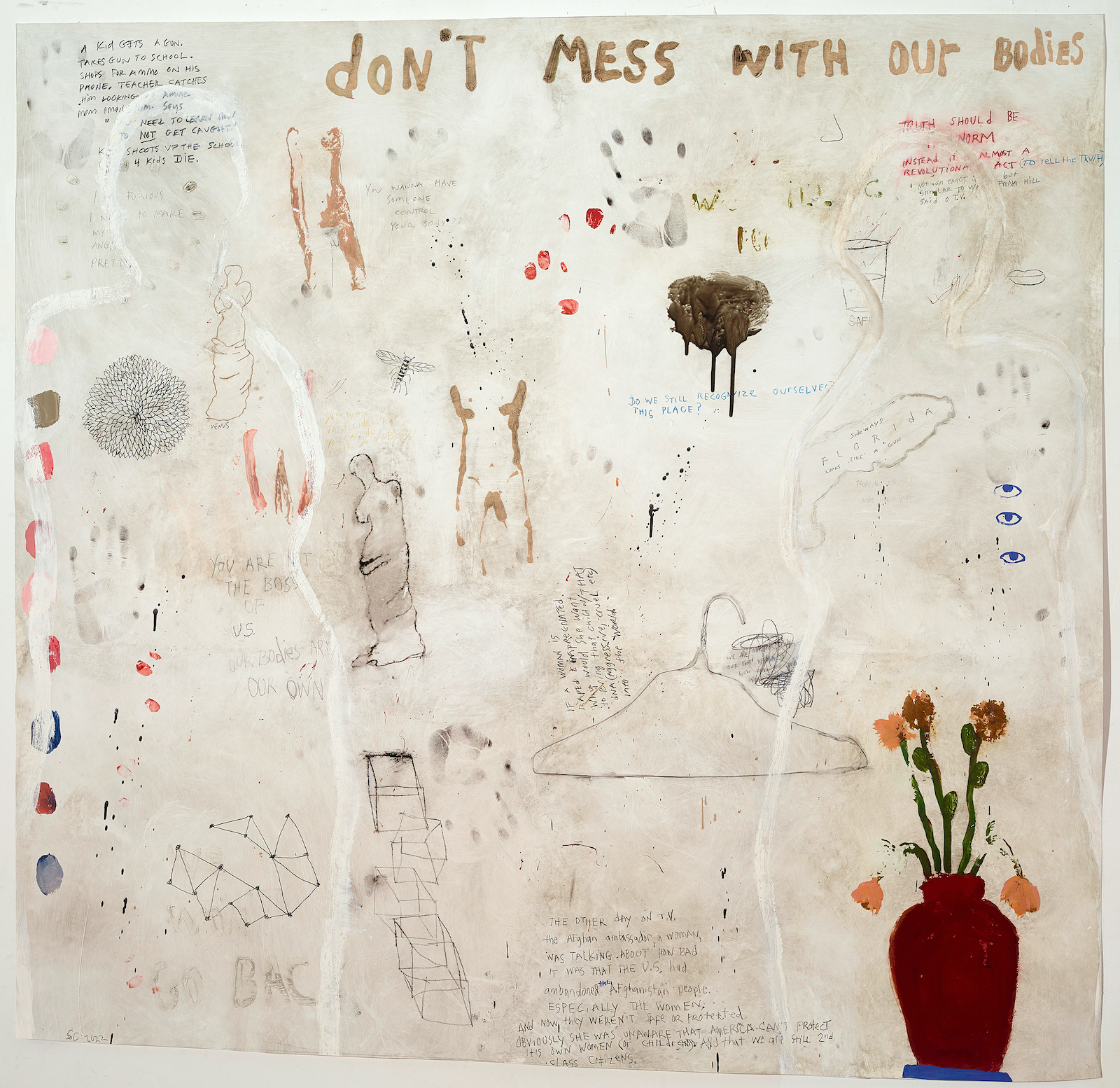 Squeak Carnwath is an archivist of the wiretapped, the fragment and the little-known fact, and her works combine image and text. As a studio artist, she defines painting as a rectilinear plane, a body and skin that are open and vulnerable to any variety of events, mindsets and experience, as long as she can render it in her chosen medium. This belief in paint is central to her work.

Conceived by the artist as ‘our space’, the image plane is able to receive and record all kinds of information. By turning into paint materials such as a poster for a stray dog ​​in her Oakland neighborhood or something she heard on the radio, Carnwath defines the surface of the painting as a wall on which she engages with collective and personal memory, depicting also depict her growing lexicon of motifs: sinking ships, logs, LPs, and Etruscan heads derived from Fayum funeral portraits.

In many of these motifs, you can sense Carnwath’s sense of the passing of time as an irreversible process and history as an infinitely repeatable process, which is a source of the anger, sadness and despair expressed in her art. Perhaps because the process of turning everything into paint allows her to think about it, I never feel like she overwhelms viewers or suggests that she alone can experience this particular pain.

In her exhibition Pattern Language at the Jane Lombard Gallery (April 29 – June 4, 2022), Carnwath’s openness to the world, from immediate circumstances to national history and world events, is infused with her dark sense of humor. In “Don’t Mess” (2022), she refocuses a sketch of Florida and writes in it: “Sideways/ Florida/ looks like a gun.” Elsewhere in the painting, she asks, “Do you want someone to check your body?” and “Do we still recognize ourselves?” and below that, “this place?”

The last two questions and their proximity to each other extend the painting beyond current concerns, asking a prospective viewer whether they still “recognize” themselves and “this place”. We know the world is going to change, but we don’t know how it is going to change. The fact that there is no guarantee of what humanity’s legacy will be is reason enough to be in a constant state of fear, given the track record of what came before us. It is this state of disturbance, which is constantly influenced by the news, that Carnwath is tapped into. While rooted in current issues – such as women’s rights and, more specifically, abortion – the artist’s question (“Do you want someone to check your body?”) is sufficiently open and untargeted, so I can’t imagine that it will soon lose its relevance.

In the square painting “Home” (2020), large letters in different colors over the surface describe:

Contrary to the question (which viewers are likely to associate with long childhood journeys), we can see what the artist painted before, part of which is now covered. Top left, between the “A” and “R”, is a crown and below it an eye. Drops of salmon-colored paint partially cover the eye. Our attention shifts between the big letters of the dominant question and the motives and questions we often ask ourselves: What does ‘Home’ mean? How is that word defined in today’s society? How will it be defined in the future?

Looking at “Home” and the other works in the exhibition, Carnwath seems to place her content on a continuum that encompasses the past, even as it looks to the future. Her involvement in everyday life, history and social issues is expansive rather than restrictive, and from this maelstrom she makes disturbing connections. In “Don’t Mess,” she wrote this observation in pencil-like paint:

Recently on TV, the Afghan ambassador, a woman, spoke about how bad it was that the US had abandoned the Afghan people, especially the women, and now they were not safe or protected. It was clear she didn’t know that America can’t protect its own wives (or children) and that we are still 2nd class citizens.

Above it is the outline of a coat hanger that women (especially those on low incomes) used to induce miscarriages before abortion was legalized, resulting in many deaths.

As one who has been to many of Carnwath’s exhibitions, both on the East and West Coasts (and contributed an essay to the monograph published on the occasion of her 2009 retrospective, Squeak Carnwath: Painting is no ordinary object at the Oakland Museum, hosted by Karen Tsujimoto) I’ve come to expect (perhaps incorrectly) that she will always do something new and unexpected, such as adding a new motif to her lexicon.

The surprise in this exhibition is “Eye Rmbrnt” (2021), an oil and alkyd painting in which gold leaf is also incorporated. On a white ground in the center, surrounded by a trompe l’oeil, gold leaf frame, is a blue eye, slightly off center. Under the eye, Carnwath has ‘written’ words such as ‘see’, ‘perceive’, ‘guide’, ‘contemplate’, ‘imagine’ and ‘contemplate’. Meanwhile, on the ground – which is the color of poached salmon – she has “drawn” simple eyes, and even simpler eyes painted in gray. Over this we see drops of orange and blue.

The point is clear, even if the artist chooses not to spell it. At a time when everything from the moon landing to the Sandy Hook Elementary School shooting is being questioned, Carnwath’s concern with vision is of great urgency. Can we see who we are and what we have become? Can we even start talking about it?