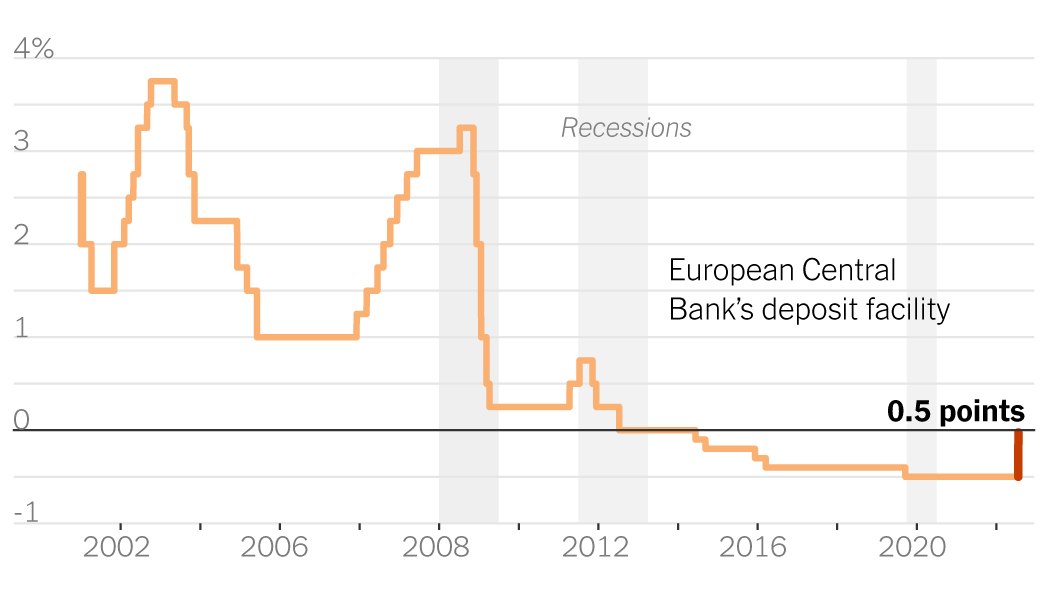 Unlike other monetary policymakers, European Central Bank officials have the added challenge of setting a single policy for many different countries, each with its own fiscal policy, economic outlook and debt level.

On Thursday, the bank is expected to release more details about a new policy tool it is designing to prevent borrowing costs from being out of sync with a country’s economic fundamentals.

These differences between countries are most clearly reflected in government bond yields, a measure of the cost of government borrowing. Investors will demand higher returns from countries they believe are riskier to lend to, perhaps because of a history of default, political instability or slow economic growth.

Loan costs for Italy, which has one of the highest Debt in the eurozone has risen sharply since the European Central Bank reaffirmed its plans to raise interest rates. This week, they rose again as the country’s government fell apart, with Prime Minister Mario Draghi stepping down on Thursday after key sections of the coalition government deserted him. The difference, or spread, between ten-year government bond yields in Italy and Germany is now about double what it was at this time last year.

The European Central Bank considers a sudden break in the relationship between government borrowing costs and economic fundamentals as so-called market fragmentation. It has said it will not tolerate this, as it would reduce the effectiveness of its other monetary policy tools at curbing inflation.

It is “critical that financing conditions across the eurozone are broadly in sync if we change our stance,” said Luis de Guindos, the bank’s vice president, earlier this month. “For two equally solid euro area companies, a change in monetary policy stance should trigger a similar response in their financing conditions, regardless of which country they are based in.”

In late June, the bank announced that it would implement its first line of defense against fragmentation from early July by directing the reinvestment of maturing bond proceeds into its $1.85 trillion ($1.88 trillion) pandemic-era bond purchase program. . to bonds from countries that would best support the pursuit of monetary policy consistency. For example, it could use the proceeds of matured German bonds to buy Italian debt.

At the same time, the bank said it was working on a new instrument to stop the widely divergent borrowing costs for some countries. Internal disagreements over the design of this instrument had to be overcome to ensure that it would not encourage governments to be fiscally irresponsible on the assumption that the central bank would come to the rescue.

The central bank has seen this struggle before. At the height of the eurozone sovereign debt crisis ten years ago, the central bank was trying to design a policy tool that would fit in with Mr Draghi, then the president of the European Central Bank, to “do everything” to save. the euro. It was met with many political and legal challenges.

Ultimately, the tool that would allow the bank to buy up a country’s debt indefinitely if the country was part of a formal bailout and reform program was never used.

The new tool is expected to come with fewer prerequisites for a country to take advantage of.