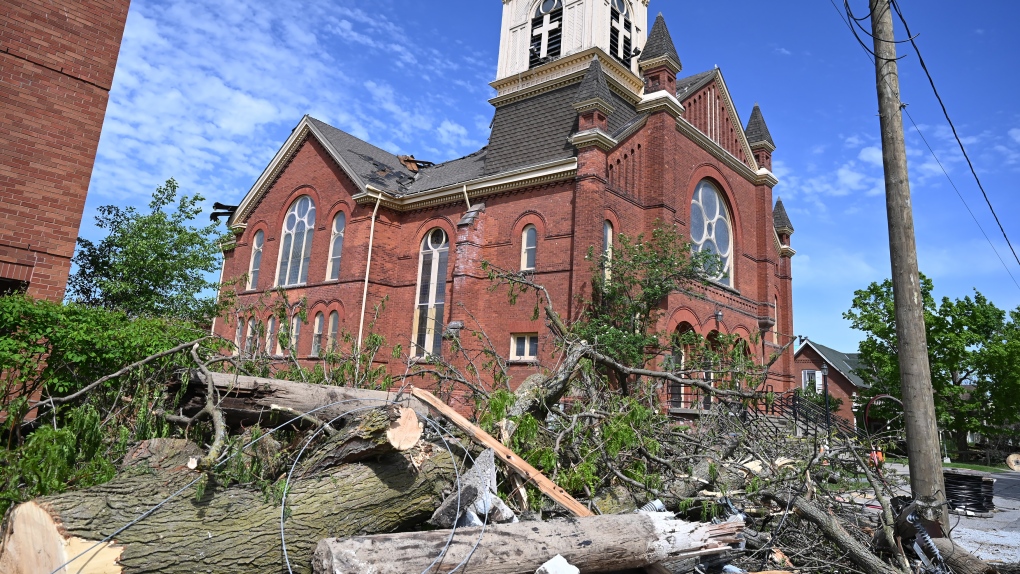 Environment Canada has confirmed that an EF2 tornado touched down in Uxbridge on Saturday as a powerful weather system swept through Ontario, tearing up homes and powering thousands of people.

In a tweet, Western University’s Northern Tornadoes Project said the May 21 tornado in Uxbridge was the first wind event in Canada to cause EF2 damage in 2022.

In an update posted Tuesday evening, Environment Canada said the group’s data has officially confirmed that an EF2 tornado was embedded in the leading edge of a derecho, a widespread and long-lasting storm associated with a series of thunderstorms.

Damaging wind gusts were reported across much of Southern Ontario as severe thunderstorms swept through them, Environment Canada said. “Following a preliminary analysis of extensive damage in Uxbridge, Ontario, Western University’s Northern Tornadoes Project Team has officially confirmed that an EF2 tornado is embedded in the leading edge of the derecho.”

The agency said the tornado struck Uxbridge around 1:15 p.m. Saturday afternoon and had a maximum wind speed of 195 kilometers per hour.

Speaking to CP24, Environment Canada Warning Preparedness Meteorologist Gerald Cheng said the agency detected winds as low as 28 miles per hour in Sarnia when the storms first hit Ontario from Michigan, but they eventually realized a mobile alarm was needed when the storm picked up.

“Looking at the wind speeds at 12:52 that day Saturday, Pearson reported gusts of 45 miles per hour – it’s a windy day. At 13.00 120 kilometers per hour. So that escalated very quickly.

“We issued a warning to the City of Toronto at 12:45 PM. But you can see the lead time wasn’t much for people to take cover.”

In a press release Tuesday, the City of Toronto said cleanup efforts related to the storm are underway. It said crews worked all weekend to respond to storm service requests and more than 2,900 requests have been received since Saturday.

“As of today, all available resources will continue to be allocated to clean-up operations and there will be a total of 45 crews with cranes, bucket trucks and ground equipment,” the city said. Crews prioritize responding to public safety or property hazards. They are clearing roads and helping Toronto Hydro by removing trees from water pipes.”

The city said it could take several more weeks to complete the non-emergency clean-ups.

A number of municipalities have declared a state of emergency, including Whitby, Ajax, Pickering and Uxbridge.

Cheng noted that severe thunderstorm warnings were added to the provincial “Alert Ready” system only last June and said that while the warnings are helpful tools, people should remain vigilant about the changing weather conditions around them.

“Not everyone gets alerts. Your phone may be off. Maybe you don’t watch TV or listen to the radio that interrupts broadcasts,” he said. “So it’s so important that you know that Mother Nature is giving us clues that when conditions worsen, don’t wait for the alarm. Take cover and take shelter immediately, and stay away from tall objects such as trees and utility poles, as they could fall on us.”