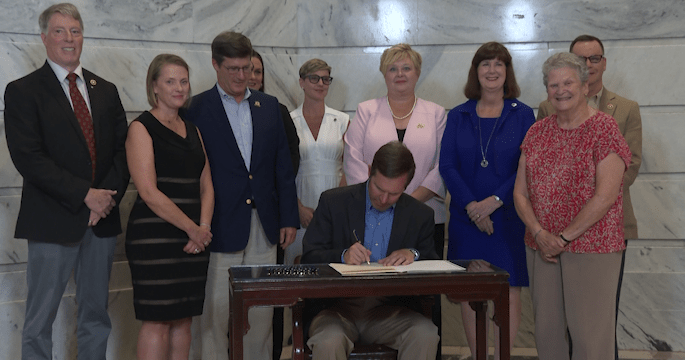 The two bills both addressed the issue of mental health in the state.

Bill 127, also known as Tim’s Act, expands access to assisted outpatient treatment, creating a three-way partnership between the courts, the health care system, and the people of Kentucky, allowing the courts to order outpatient care for individuals with severe mental illness. condition .

This new law extends this access in three ways:

“Providing care for individuals with severe mental illness is critical to the health and success of the Commonwealth,” Governor Beshear said. “This law gives our people more options for treatment and to keep them out of institutions. This has a positive impact on patients, their families, the courts and the community at large.”

The new law allows first responders to take up to 48 hours of leave after responding to a critical accident without consequences.

A serious accident can range from a car accident to the death of a colleague.

If there was one overarching theme for today, it would be supporting people with mental illness.

“So by doing this we become a much more compassionate state, supporter of Bill 127 District Court Judge Stephanie Pearce Baker. “This is a victory for Kentucky and for our seriously mentally ill population.”

“I’m looking forward to making sure we expand this statewide, to get the funding in there so we can help more people,” said Bill 127 co-sponsor Rep. Ken Fleming. “This affects only less than 2% of people, but those 2% are our loved ones and we need to support them as much as possible.”

“This bill recognizes the importance of protecting the mental health of our first responders while strengthening our support for those who have dedicated their lives to protecting us and our communities,” said Ashley Tackett Laferty, sponsor of Bill 562.

“A firefighter is more likely to die by suicide than on the spot or in an accident, and that really worried me,” said Josh Ratliff, captain and chaplain for the Middle Creek Volunteer Fire Department. “It worried me about the mental health of our first responders. So I reached out to Ashley and I’m grateful and thankful for everything because as soon as I brought it up to her, she was right. She was right and I thank God we have the people who care enough about our first responders.”

The governor also made it clear that he plans to implement more laws in the coming years to help people with mental health problems.