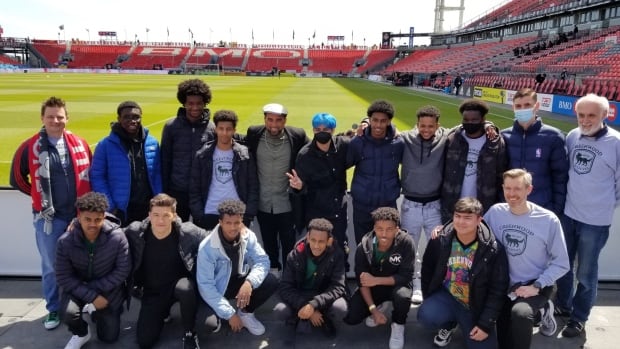 The team, known as the Greenwood Wolves, caught the eye of Toronto FC President Bill Manning after winning the city championships.

They had the opportunity to meet Toronto FC legend Dwayne Derosario ahead of Saturday’s game and wore the crest as part of the opening ceremony.

Coach Peter McKenzie said it was a special day for the guys, who are all newcomers to Canada.

“A lot of them escape political persecution or domestic violence. They have relatives who couldn’t get to Canada safely, so definitely challenges that most teens in Canada don’t face,” McKenzie told CBC News.

“I think being part of a team, connecting with other students from other countries relieves a lot of that stress.

“By bonding with each other, feeling a bond with their school, their city and their new country, I think it’s a great way to relieve that stress and just make those first experiences in Canada positive,” he added.

McKenzie says the team is made up of players from Afghanistan, Angola, Brazil, Eritrea, Ethiopia, Mexico, Syria and Turkey.

With a student population that is all newcomers, Greenwood Secondary School’s mission is to help its students learn English, work on their math and transfer them to a regular high school.

“The kids are a bit beside themselves. It’s super exciting to be down here,” McKenzie said.

“There are some students who had never been on the tram before coming down, so this is all very new. It really is. It’s a special experience and we are very grateful to TFC for making this possible. ”

Team captain Natnael Aemro, 18, who is from Eritrea, hopes to play on the TFC pitch in the future.

“I love all things about Canada, the freedom, the education, more opportunities to play football, and especially today, I mean, TFC Field, that’s a big surprise to me. I’ve never been to the TFC field. This is my first time,” he said.

“I’m so excited. When I first came through the door, I wanted to play here one day and I hope I’ll do it.”

Osman Ali, 19, who is also from Eritrea, had a hard time learning to speak English at first, but it didn’t take too long for him to learn it.

He is now happy with the opportunity to meet new friends and see new places.

“We’re excited because we’re on the pitch now,” he said.

Felipe Soras (17) from Brazil has been working for the Greenwood Wolves for five months, but he also has big football dreams.

“I hope to play here. My dream is to become a footballer and I can play here on the TFC pitch.”

So proud of our @TDSB_Greenwood Wolves, rejoicing @TorontoFC legend @dwaynederosario and wear the decal as part of today’s opening ceremony. @tdsb pic.twitter.com/mjDLucIeOO