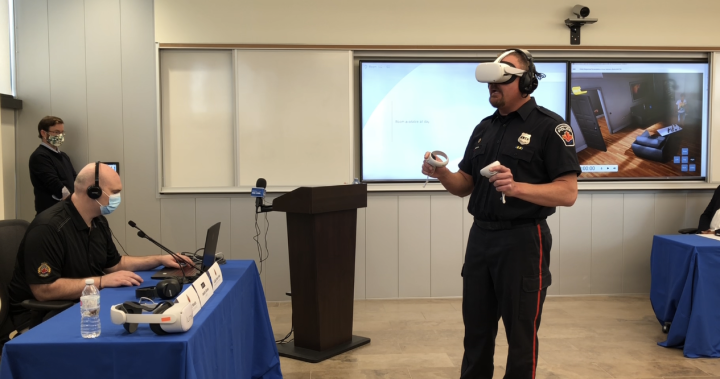 The Mental Health Crisis Response Training Program (MHCRT) was developed by researchers from Wilfred Laurier University and Toronto Metropolitan University, formerly Ryerson, in direct response to multiple reports about how police need better de-escalation training, including Paul’s Ombudsman report. Dube from 2016 and a 2014 report from Justice Frank Iacobucci about the police murder of 18-year-old Sammy Yatim on a streetcar in Toronto.

Jennifer Lavoie, an associate professor of psychology and criminology at Laurier and one of the principal investigators behind the program, said the training works like a “choose your own adventure” scenario where an officer is immersed in a virtual encounter with someone experiencing mental health. . crisis.

“It’s really designed to do two things. The first is to give officers a chance to recognize the signs of a mental health crisis,” she said.

“The second is to give them the opportunity through scenarios to practice de-escalation strategies, learn and practice different types of communication techniques, and practice relational policing approaches. And that will allow for more humane and safer responses over time.”

const. Scott Woods gave a demonstration of the technology on Thursday, wearing the VR headset and interacting with a virtual person named Jamie who has PTSD and injuries to his face and ribs.

Woods spoke to Jamie, who had also just smoked pot, and learned that the young man was afraid of intruders entering his house and attacking him.

At one point Jamie picked up a bat, but Woods was able to address him calmly and assure him he was safe.

The simulation ended with Jamie putting down the bat and Woods calling ambulances to check on his injuries.

Lavoie said the simulation could have gone differently if Woods hadn’t been properly trained in responding to mental health crisis scenarios.

“We’re looking for officers to validate that concern and help Jamie feel safe,” she said.

“It’s really about trying to figure out what that willingness has to help a person in crisis and work with them to figure out the next steps.”

Lavoie has spent the past six years working with researcher Natalie Alvarez of Toronto Metropolitan University on the program.

The program itself was developed by Toronto-based immersive learning company Lumeto, and the content has been informed by community stakeholders, lawyers, clinicians, nurses, forensic psychologists, and Indigenous cultural security and anti-discrimination experts, in addition to police instructors from around the world. Ontario.

Most importantly, the program got input from people with mental illness, whom Lavoie said are more likely to be victims of police brutality.

“So we have to recognize those shortcomings and those experiences and they have to be incorporated into it authentically. Otherwise, this won’t change.”

That process included considering how racialized people and members of the LGBTQ2 community who also have mental illness are still disproportionately affected. Therefore, one of the scenarios involves an indigenous person who hears voices and another involves a young person who is transgender.

“If you don’t know how to interact with community members, that’s not acceptable. We need to have a police force – if they respond, if they’re the ones who get into mental health crisis situations, they need to know how to respond to all members of our community.”

So far, there are six virtual situations that agents can experience: three of them are 90-minute exercises that allow for discussion during training; and three are 10-minute ratings that evaluate officers on how they respond to an incident.

The Hamilton Police Department is the first in Ontario to get on board with the training program, but Lavoie said others have expressed interest and she hopes it will become more widespread.

“We want to standardize training across the province so that the kind of response I would get if I was in a crisis in Stratford, Ontario, would be the same as in Toronto or the same here in Hamilton. And it’s not now , it’s kind of all over the place.”

She also pointed out that there are cost benefits to using virtual reality training.

The program itself is free, and they’ve already bought the VR equipment for every municipal and First Nations police force in Ontario, so using the immersive technology would be cheaper than the cost of live in-person training.

“So you could look at the behavior of a group of officers the year before training, offer the training, and then look the year after and say, do we see noticeable differences in police practice? That’s really the only way to see if training is effective or not.”

The service says it will include the new VR training program in the current crisis intervention training, in which approximately 75 new members participate annually.