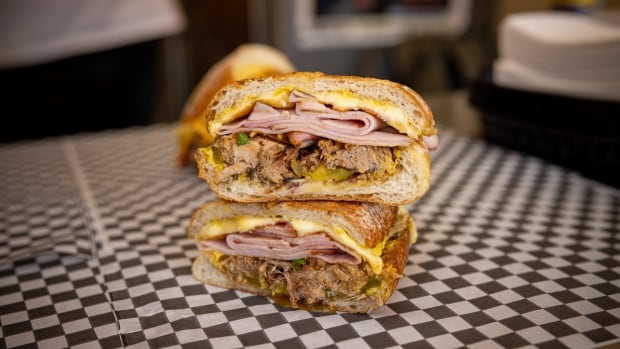 Metro Morning’s food guide Suresh Doss joins us every week to discuss one of the many great GTA restaurants he’s discovered.

This week, he spoke to host Ismaila Alfa about a group of Toronto chefs who joined forces to start a sandwich shop during the pandemic.

Chefs gathering during the pandemic to open up new places is a bit of a recurring theme.

Suresh: Yeah, so for the past few months we’ve been talking about Fattoush Levantine Diner, a group of chefs got together to open this Jordanian inspired eatery.

And we’ve talked about micro-food halls, pop-ups, and chefs coming together in one restaurant space to do multiple things to try and share the rent. So this is another example of how the restaurant industry, which is still going through a tumultuous time, is adapting to [including] labor shortages, rising rent costs and a shift in the way we eat in this city.

Ismaila: Tell me about DAM Sandwiches.

suresh: Three young chefs, Aidan MacDowall, Dong Too Eum and Miguel Arguello, worked in some of the best small restaurants in town.

If you’re someone obsessed with restaurants in Kensington Market or on Ossington that have opened in the last five to seven years, their hands have made your plate.

During the pandemic, they got together to launch this pop-up series where they would set up at breweries and other events. They finally found this little spot in Oakwood Village and opened in December.

Ismaila: So what’s on the menu? Tell me about your favorites at DAM.

suresh: The beauty of this place is the limited menu. There are only a few sandwiches which are the normal items. The most popular item on the menu is the brisket sandwich. This is Aidan’s recipe.

The brisket is slow cooked for over 30 hours, the meat is really tender and juicy at this point.

It is loaded onto a Portuguese bread roll that they buy at a bakery nearby. It’s then loaded with cooked peppers and onions, and this mayonnaise mixed with a Morita Chiles chili sauce, which gives it a delicious kick, but also enhances the smokiness of the brisket.

And it’s topped with a handful of hickory sticks for a crunch on top.

Ismaila: That’s an interesting topping on a sandwich.

suresh: It works really well and brings this pleasant crunch to the center of every bite. There’s also a great take on Cubano on the menu, which is layered with roast pork shoulder. And on top you have cheese, pickles, sliced ​​ham, salsa and it’s rounded off with a layer of mustard.

To me it tastes like a combination of a classic Cubano and a New Orleans Muffaletta sandwich – there’s a lot going on, but it really sings. If you’re not into meat, there’s this really good fried cheese sandwich.

suresh: Provolone cheese cooked on the griddle so it has this nice char and is slightly gooey. Then this flavor build-up of roasted onions and peppers, tomato and spinach

Ismaila: You said there are some other items on the menu besides the sandwiches. Can you share some favorites?

suresh: Each of the three chefs has brought their heritage and culture onto the menu. Dong is Korean so interestingly you will find japchae on the menu which I think when you first see it you will do a double take.

The glass noodles have just the perfect texture and they’re tossed in this medley of roasted onions and peppers, with lots of soy sauce and sesame and garlic oils. And it also has some pepperoncini in it for a little kick.

But the star really is how well the glass noodles are cooked. It’s very good. It’s made in small batches, so if you see it, order it.

Ismaila: There really is a lot of creative space in this kitchen.

suresh: So I think they’ve kept the core menu limited so they can fire off different specials every week.

Their Instagram is really great. They did their version of a choripan sandwich, a take on the common street food found in Latin America. Also a dakgalbi sandwich, a Korean style chicken marinated in gochuchang which is then fried, served in sandwich form.

So yes, a lot of energy in a small place.