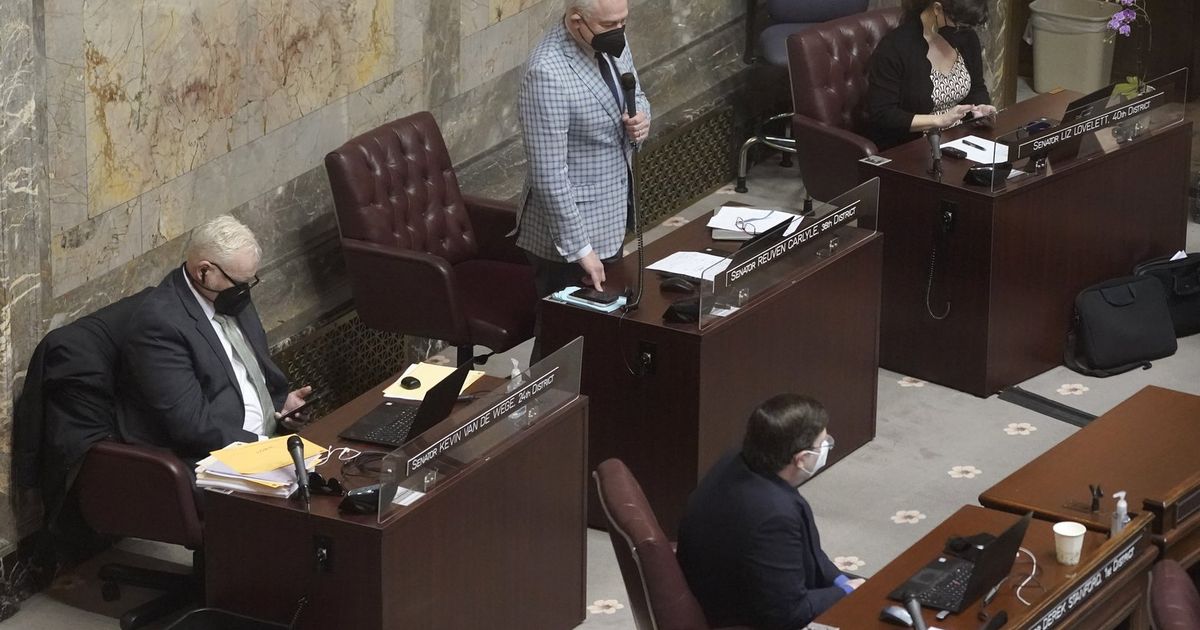 The Mental Health Project is a Seattle Times initiative that focuses on treating mental and behavioral health problems. It is funded by Ballmer Group, a national organization that focuses on economic mobility for children and families. The Seattle Times retains editorial control over this team’s work.

New laws surrounding mental health issues were often put on the back burner at this year’s legislative session, as hot topics like policing and affordable housing demanded the legislator’s attention.

Ambitious bills seeking to improve staffing shortages in the behavioral health world and some aimed at providing more psychiatric beds failed to make it into this year’s short and saturated session. Nor a bill to legalize psilocybin, or psychedelic mushrooms, for mental health treatment.

Here are some of the bills that were — and were not — passed at Olympia and what they mean for the future of mental health in our state.

One thing many lawmakers and advocates agreed upon this year was the need to prioritize a patch for House Bill 1310. It was passed last spring and was part of a package of police reform bills in response to the 2020 protests for racial equality and determined when officers could use physical strength.

However, the bill had unintended consequences as law enforcement officers stopped responding to some calls from social workers and counselors seeking help transporting people in crisis to emergency rooms or psychiatric facilities.

This year’s fix, HB 1735, clarifies that in these situations, police officers can respond and enforce the state’s involuntary treatment law, which goes into effect if a person poses a threat to themselves or others, or is severely disabled and deteriorates. The bill was signed last week by Governor Jay Inslee and is now in effect.

We would love to hear from you.

The Mental Health Project team is listening. We’d like to know what questions you have about mental health and what stories you’d recommend we cover.

Senate Bill 5638 would have allowed associate-level social workers, counselors and therapists to work while their permit applications are being processed. Another, HB 1863, is said to have allowed psychologists to prescribe psychotropic drugs. Usually, only psychiatrists are allowed to do this, but proponents hoped the bill would have improved access to drugs, as wait times to see a psychiatrist can be weeks or even months.

Finally, HB 1865 is said to have created a peer reference for those with personal experience of substance use or mental illness. The peer movement has seen a growing wave of support and a version is being used within the Medicaid system. Lawmakers also wanted to roll it out to those with commercial insurance, but the bill died in the Senate.

A bill passed is HB 1286, allowing Washington state to join 28 other states in the US in the Psychology Interjurisdictional Compact. This allows licensed psychologists to provide teletherapy in partner states and temporarily provide up to 30 days of personalized advice.

The state budget also currently includes a 7% increase in the amount community health agencies receive when they bill Medicaid, which agencies say must continue to provide services to low-income people.

King County Behavioral and Recovery Department staff also welcomed the additional $10 million budget for the construction of a new 16-bed crisis stabilization facility that would open in the coming years. gov. Inslee is expected to sign the budget in the coming weeks.

A few bills aimed at expanding the services available to people with mental illness.

HB 1773, a controversial bill, opens the door to court-mandated assisted outpatient treatment. It is passed and allows a designated emergency responder to petition for a person to receive medication or therapy before they get worse and require involuntary treatment in a more restrictive environment. While groups such as Mothers of the Mentally Ill (MOMI) and the National Alliance on Mental Illness’ Washington organization have supported the bill, other organizations such as Disability Rights Washington worry it could affect the agency of people with mental illness to make their own decisions. take limited. Critics also cite the high price tag and say the money could be better spent on voluntary, community care.

But MOMI’s Jerri Clark supports the need for more such programs. “I believe outpatient care was the missing ingredient that could have saved my son’s life,” she said.

Clark’s son Calvin died by suicide in 2019 after years of homelessness, incarceration and hospitalization following a diagnosis of bipolar disorder.

Another bill passed by the legislature is SB 5736, which expands coverage for youths 21 and under who are on the Apple Health plan so they can receive partial hospitalization and intensive outpatient services.

For Senator Manka Dhingra, D-Redmond, who co-sponsored SB 5736 and the Senate accompanying bill on HB 1773, these are critical steps. “It’s really about making sure you provide services sooner rather than later,” she said.

Lawmakers also gathered around the mental health of children and young people this session and passed three additional bills that are now awaiting signature by the governor.

HB 1905 focuses on the moment when young people leave foster care and start looking for housing — where some young people become homeless. The bill requires the Ministry of Children, Youth and Families to coordinate a rapid response team that would support young people in the system who are under 25 with planning and funds, if necessary, to ensure safe housing.

Schools will also see some changes thanks to HB 1664, which will increase the number of nurses, social workers, counselors and psychologists working with students. In three years’ time, the minimum ratio of these employees will increase to provide students with more emotional and psychological support.

A separate bill, HB 1890, looks further into the future and instructs the Children and Youth Behavioral Health Working Group to develop a strategic plan for young people and their caregivers. They will analyze what services are currently available in the field of behavioral health and develop a plan for an improved future system.

“The way we’ve kind of been chuffing for the past three, four years, we’ll start to see later this year, [and] next year,” said Senator Dhingra. “If [new mental health] facilities are coming online and these beds are coming online, I really think we are past that tipping point.”