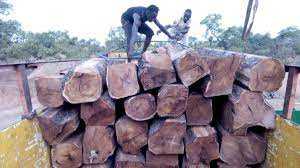 China’s illegal and unsustainable trade in rosewood from Mali has fueled corruption and served as a conduit for the ivory trade in West Africa, according to a new analysis. The export of Pterocarpus erinaceus – often known as “kosso” or “keno”, a species whose trade is controlled by the Convention on International Trade in Endangered Species of Wild Fauna and Flora – has made Mali one of the leading suppliers of rosewood. to China since 2018. (CITES). According to the findings of the Environmental Investigation Agency (EIA), between January 2017 and January 2022, China imported the equivalent of half a million kosso trees from Mali, worth about USD 220 million, much of which was the result of illegal harvesting or illegal exports.

The relentless wood poaching in Mali’s southern forests has led to a significant decline of the species. EIA’s reports on Nigeria, Ghana, Guinea-Bissau and The Gambia have shown how the illegal and unsustainable trade in Pterocarpus erinaceus has persisted despite its listing on the Convention on International Trade in Endangered Species of Wild Fauna and Flora (CITES) . Thorough research indicates that most, if not all, trade of Pterocarpus erinaceus from West Africa to Asia has taken place in violation of the treaty. According to EIA’s analysis, as of April 2022, a total of more than 3 million tons and more than $2 billion worth of illegally traded rosewood between West Africa and China will be involved.

EIA’s new findings, presented in the Poached Timber report, emphasize the importance and urgency of a regional solution to the rosewood crisis. The report focuses on Mali, a country that has faced two coups and a jihadist insurgency since June 2020. The EIA researchers found that human trafficking networks are deeply rooted in the country. Illegal and unsustainable trade seems to be the norm rather than the exception. “EIA’s findings also indicate that invalid CITES export licenses (missing some crucial information) have often been used to export rosewood from Mali to China. Illegal rosewood trade has also been a conduit for the ivory trade, particularly the smuggling of Gourma elephant tusks (Loxodonta africana) into China,” the report said.