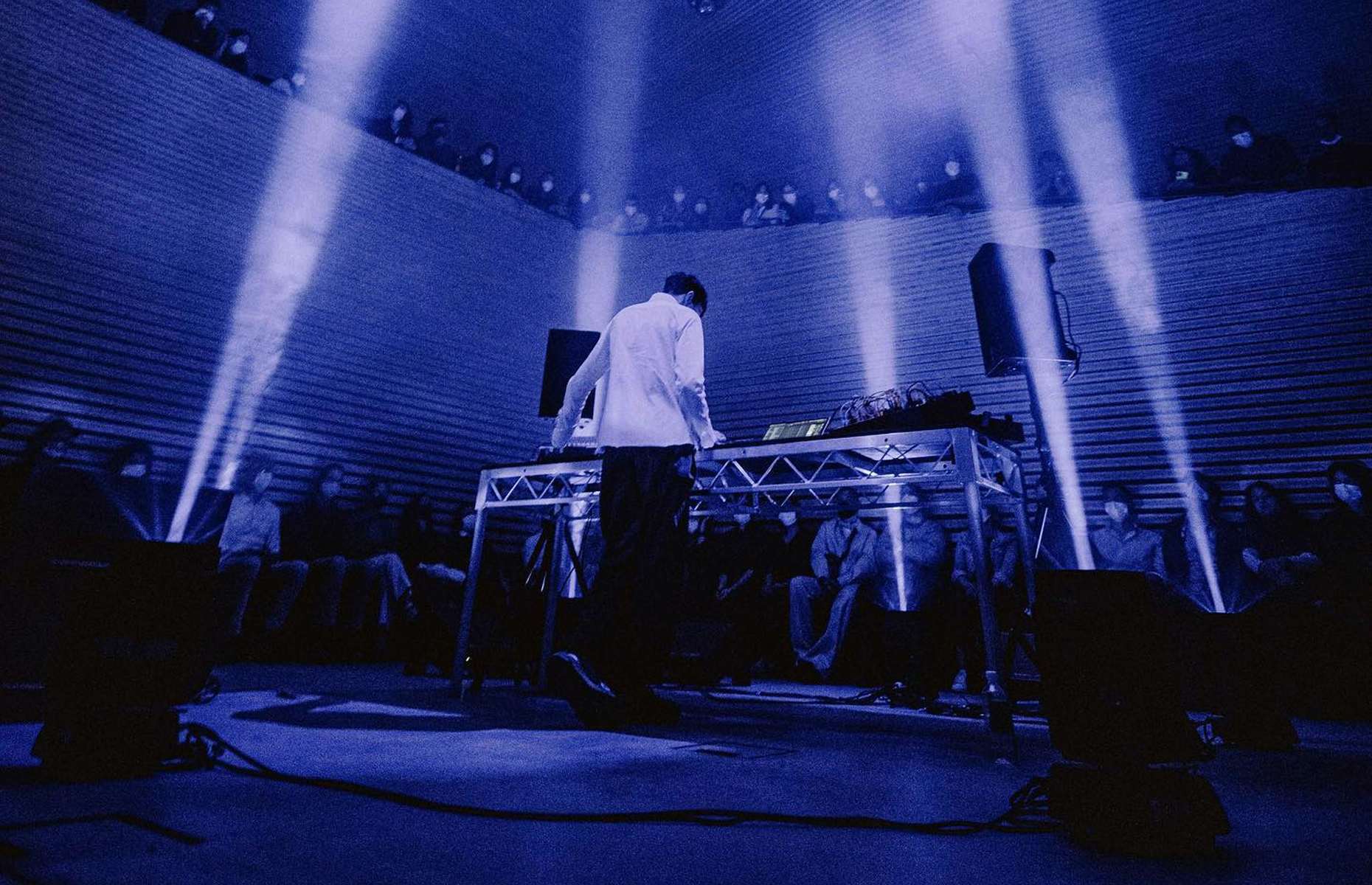 As you step into the arena, a wooden structure greets you by descending a flight of stairs that wraps around the stage. This is Phoenix Central Park, a performance space in Chippendale where I saw the eclectic, experimental electronic artist Matt from Melbourne/Naarm, better known as Third Space. Notably, Third Space has played several times at the Pitch Music Festival in Victoria, along with other well-known Melbourne venues such as the Abbotsford Convent, The Oratory and Magnet Studios. He also released his EP ‘Pattern of Spring’ in 2021 on the Sydney-based label Pure Space. Matt was also FBi Radio’s Independent Artist of the Week in June 2021, reflecting the wider continuum of Australian ambient and noise music, including Oren Ambarchi, Lawrence English and Justice Yeldham to name a few.

The complementary earplugs were much appreciated as I sat down and waited for the performance to begin. Third Space’s performance was an exceptionally unique audiovisual experience, with spinning, pulsing and shifting colored lights perfectly accentuating the wide range of sonic spaces it traveled through. The experience ranged from light-hearted ambient sounds to dancing drums and moments of dark, terrifying noise. As much as I try to describe and explain the performance, the personal experience and the moments of bliss and wonder, it is difficult to fully understand it by written word alone. This is the case for almost all ambient, noise and other experimental music performances I’ve seen, hard to understand until you experience it yourself, but something I beg everyone to see.

After the climax of flashing lights, exploring sonic landscapes, and sensory wonder, I was lucky enough to interview Matt.

SP: What was it like performing in Phoenix Central Park compared to other spaces you’ve performed in, and how do different spaces affect how you perform?

TS: From an audio perspective, it was one of the loudest spaces I’ve performed in, which was great. The scale and governance of it all was amazing too, for a small performer like me to play 2 sold out solo shows in a space as big and impressive as Phoenix is ​​such a unique and special experience. More generally, the main things that affect my performances are the time of day, location and speakers, as the atmosphere of the room affects how I play.

SP: What are the difficulties of the music you play compared to more conventional performances?

TS: I can’t really comment on performing more conventional performances, but one of the biggest differences in the space is having a patient audience that’s willing to just sit there and listen, because you don’t have to compete to get the attention of the public like you do in a pub or other places.

SP: I know you also have another project called Knotting, how does working with a singer affect your music?

TS: It’s amazing, Georgia, who I play with, is extremely talented and understands the intricacies of melodies and harmonies, which I can’t do myself because I have a percussion background. This opens up a whole new space for experimentation in composition as we can focus on chord and modal shifts, unlike Third Space where sound design and percussion are the main avenues of experimentation. Also, in our work there is a cross between the human voice and technology by using computer software to stretch a voice to do something it can’t organically. Georgia also stretches what she can physically sing, which really adds to the sound. Also using a singer brings some awareness to the audience, as synthesizers are more of an abstract area to experiment with than a voice, allowing me to exploit new compositions and atmospheres.

SP: What do you think of the current state of experimental music in Australia? Is there anything you think is missing?

TS: We have incredible locations and perfect clients in Australia who are respectful, patient and motivated to try new things. Obviously, COVID has affected a lot of things, but our home atmosphere is so vibrant and people are still eager to try new things and have fun on a night out. Honestly, the main thing I wish we had would be better speaker systems because they improve the performance experience no matter what you see. However, it is clear that it is extremely expensive for venues to do this and there is simply not enough money in the industry to afford that. Other than that, I’d just say more support for artists you like! Buying records, merch and supporting artists directly on Bandcamp are great ways to show your support and help artists grow.

TS: Buy music, go to shows, support things you’re interested in, there’s a scene for everything. Experience music live, it is the best way to see music and cannot be replicated in any other way.