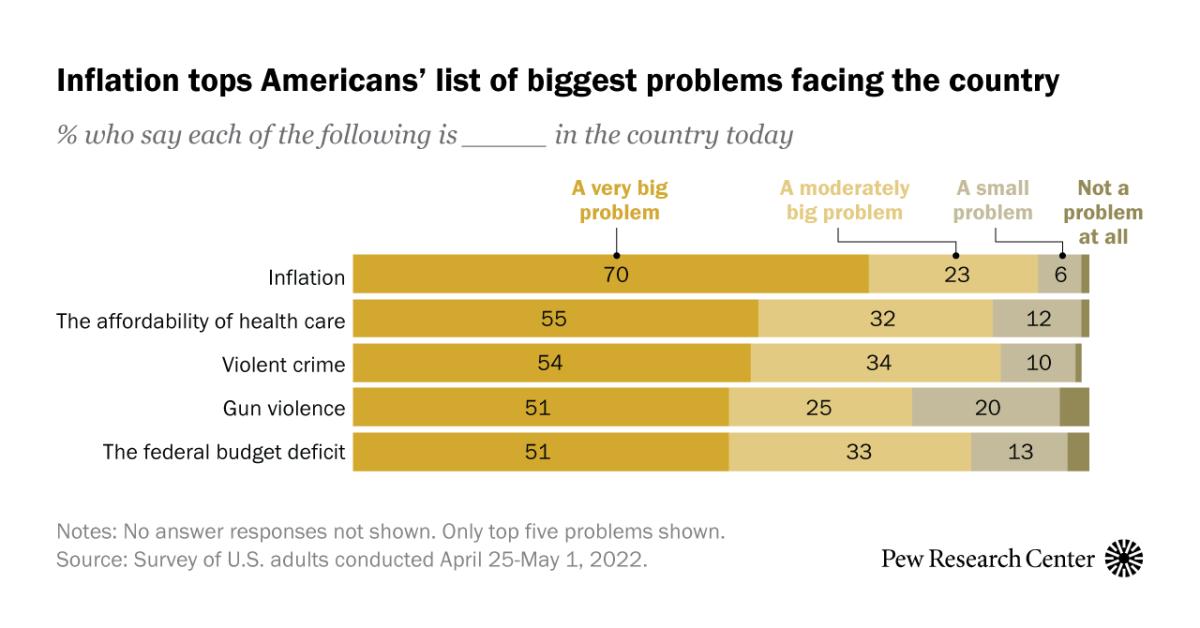 The public views inflation as the biggest problem facing the United States — and no other concern comes close.

Seven in ten Americans consider inflation to be a major problem for the country, followed by health care affordability (55%) and violent crime (54%).

About half say gun violence and the federal budget deficit are very big problems (51% each), according to a Pew Research Center survey conducted April 25 to May 1 of 5,074 U.S. adults. More than two years after the coronavirus pandemic, only 19% of Americans consider the coronavirus outbreak a very big problem for the country, the lowest share of the 12 problems included in the survey. In June 2020, in the early stages of the outbreak, 58% rated it as a very significant problem, making it one of the top concerns at the time.

Pew Research Center conducted this research to better understand Americans’ views on the major problems facing the country. For this analysis, we surveyed 5,074 U.S. adults in April and May 2022. Everyone who participated in this survey is a member of the Center’s American Trends Panel (ATP), an online survey panel recruited through national, random sampling of residential addresses. In this way, almost all American adults have a chance of being selected. The survey was weighted to be representative of the US adult population based on gender, race, ethnicity, partisan belief, education, and other categories. Read more about the ATP method.

These are the questions used for this report, along with the answers and methodology.

With few exceptions, Republicans and Democrats differ on what they see as major national problems. Inflation is by far the biggest concern among Republicans and independents leaning towards the Republicans, 84% of whom say it is a very big problem in the country today.

Neither Republicans nor Democrats generally view the quality of public schools as a major problem. Four in ten Republicans (41%) and a similar share of Democrats (36%) say this is a very big problem for the country.

While the coronavirus has declined as a major problem over the past two years, so has unemployment. In the new survey, just 23% of Americans view unemployment as a very big problem, down from 41% a year ago and 50% in June 2020. The drop has occurred among members of both parties.

The proportion of adults who say racism is a very big problem for the country has fallen by 10 percentage points since April last year, from 45% to 35%. Most of the change has happened among Democrats: 49% now see racism as a big problem, up from 67% about a year ago. Republicans’ views are largely unchanged (14% today, 19% then).

Note: These are the questions used for this report, along with the answers and methodology.

Vianney Gomez is a research assistant focused on US politics and policy at Pew Research Center.