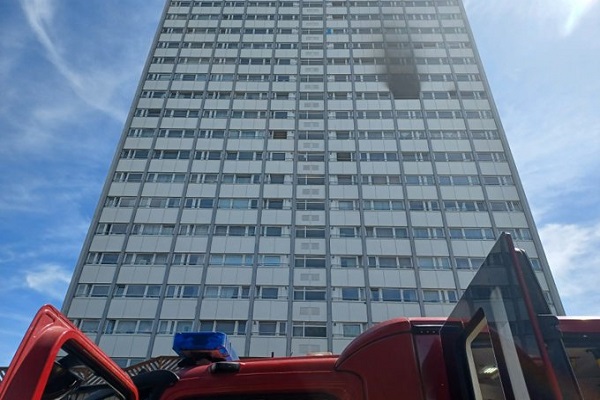 It comes amid a debate over the contribution of combustible insulation to the fire at Grenfell Tower.

Expert witness Professor Luke Bisby estimated that the insulation materials only contributed between 2% and 10% of the fire’s ability to spread, with most of the rapid fire spread being caused by the polyethylene in the cladding panels.

However, he has also stressed that combustible insulation could be the cause if used in another form of construction.

The London Fire Brigade (LFB) confirmed yesterday that the fire at Stebbing House was caused by the battery of an electric bicycle.

The brigade has issued an urgent warning about e-bikes, saying it has seen a “huge spike” in such incidents this year involving electric bicycles and scooters.

Charlie Pugsley, Deputy Assistant Commissioner for Fire Safety at the LFB, said: “When these batteries and chargers fail, they do it by force and because the fires are developing so quickly, the situation can quickly become incredibly serious.

“These items are often stored in communal areas and hallways and can block people’s only escape route.”

The brigade said there is a particular risk associated with converted bicycles – where the electric motor has been added to a regular bicycle.

It advised that if they are to be charged indoors, they should be placed on a hard surface, away from escape routes, in a room with a smoke detector and charged only when the user is awake.

Eight fire engines and about 60 firefighters attended the Shepherd’s Bush fire and escorted six residents to safety via an internal staircase. Other residents, including three from the affected flat, had left the building before the fire service arrived.

The London Ambulance Service confirmed that two patients were examined at the scene and another was treated and taken to hospital.

The LFB used new live streaming technology – 9Eye – during the fire, which allowed 999 callers to stream footage of the incident directly to the call center.

This contrasts with the incident at Grenfell Tower, where call handlers failed to realize the fire had spread beyond the fourth floor even after it reached the top of the building, as they had not seen any footage of the incident site.

The fire came on a busy day for the LFB, which was also present at a major fire in a tower block in East London. In a statement, the LFB said both incidents “show how far we have come as an organization” since the Grenfell Tower fire.

It deployed more than 40 fire engines and 250 firefighters throughout the day in incidents, including a cafe fire and a care home fire.

The biggest bet was at the apartment block in Grantham Road, Manor Park, east London, where 15 fire engines and more than 100 firefighters tackled a major fire that damaged flats on the 13th and 14th floors.

About 60 people left the building before the brigade arrived. It used its new 64-meter ladder to fight the fire.

The ladder is the tallest in Europe and twice as long as the LFB’s largest ladder at the time of the Grenfell Tower fire.

Footage from the scene showed the flames breaking out of a window and licking up the exterior of the building to break the window of the flat above and re-enter the building.

Firefighters are fighting a fire on the 13th floor of an apartment building in #ManorPark Our Control Officers have answered more than 30 calls to the fire © @coryjed_ t.co/tfTfr8SX2Z pic.twitter.com/it6s4YlQfs

This is an effect known to firefighters and can occur in buildings with a non-combustible outer wall if the fire is large enough.

A spokesman for the London Borough of Hammersmith & Fulham (H&F) said: “The Grenfell fire made one thing very clear: just meeting the minimum fire standards is not enough. The current national building regulations are clearly not good enough.

“Since 2017, H&F has spent millions to make sure the three tower blocks on the Edward Woods Estate are as safe as possible. We have made every effort to make these blocks safe for our residents as part of our £20 million Fire Safety Plus programme.

“The fire at Stebbing House showed that the building worked to contain the fire safely to a single flat. Fortunately no one was seriously injured. The actions of the crew of the London Fire Brigade were immediately aided by the improvements we made to the block.

“Based on expert advice, we plan to further improve these tower blocks to make them even safer, including removing the solar panels, upgrading the structure of the building and removing any UPVC windows. This is part of our ongoing efforts to exceed building regulations and reassure residents that we are working with leading engineers to keep them safe at home.”

The renovation project at Stebbing House, which took place in 2012, was assessed in 2012 by the London School of Economics in a report entitled High turnout hope†

This story was originally published yesterday, before being temporarily removed from view as more information about the building safety issues at Stebbing House went to the Indoor Living’s attention. The story has been republished with the new information in it, as well as the LFB’s warning about electric bicycles.