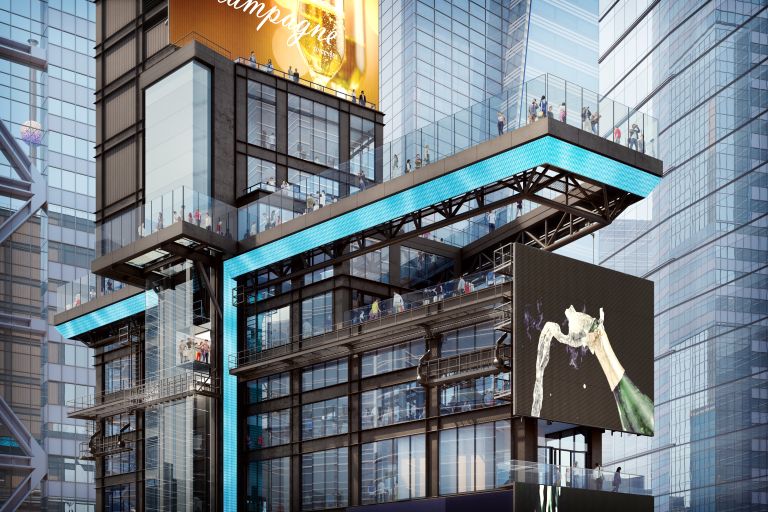 Oh, how the roles are reversed.

The landlord built the digital version of the tower – home to the iconic New Year’s Eve ball – last year based on its real-life counterpart. But the real estate developer announced Friday it would use $500 million to redevelop the physical version of the 118-year-old building to make it more like its Decentraland twin brother.

The redevelopment will create a new viewing platform and museum experience across six floors; 12 floors of digital, virtual and augmented reality installations; and a new subway entrance when the property reopens in summer 2024. But don’t worry: The tower’s north-facing LED signs will continue to shine brightly in Times Square throughout its 27-month construction process, according to the landlord.

“It’s designed as a kind of physical twin of a metaverse experience, which is the opposite of what humans have done,” Michael Phillips, the president of Jamestown, told Commercial Observer. “We have designed a metaverse and a virtual experience, which we are now going to build in [the building]which I think is the really compelling piece of how the physical real estate is coming to life with the technology that’s now available in the digital world.”

At the intersection of 42nd Street, Seventh Avenue and Broadway, the physical One Times Square is already a sight to behold. Built in 1904 as headquarters of The New York TimesThe building is known worldwide for its bright neon signs that can fetch anywhere from $75,000 to millions of dollars depending on the length of the campaign, according to a Jamestown representative.

Jamestown “built” the metaverse counterpart to the 26-story building in December 2021 after hosting a virtual New Year’s Eve party in 2020 due to pandemic restrictions on in-person gatherings. The company partnered with Digital Currency Group to bring One Times Square into the Decentraland metaverse, increasing engagement in the ball drop from 1 billion impressions in 2019 to about 2.4 billion impressions in 2022, the landlord said. The online gathering featured immersive virtual games, rooftop VIP lounges and art galleries as real-life COVID-19 cases increased and local festivities were canceled. At least in the metaverse, last December, One Times Square was the tallest building around.

The newly renovated One Times Square will, for the first time in its recent history, be open to the public as a “21st century visitor center for New York,” as Phillips put it. While the 21st floor is occupied by the team planning the New Year’s Eve ball, the building is mostly empty, says Tom Harris, president of the Times Square Alliance, which teams up with Jamestown for the New Year’s Eve festivities every year. The renovations would allow the public a glimpse of the inside of the property, unseen and largely unoccupied since the 1990s.

One Times Square hasn’t needed tenants – the building’s advertisers are plenty. When Lehman Brothers — the financial company that went bankrupt during the subprime mortgage crisis of 2008 — bought the building in 1995, it renovated the facade with billboards, leaving profits on the largely vacant tower. After $500 million in renovations, the property’s iconic exterior will no longer be the only part of sports advertising – inside the building, visitors viewing the space through virtual reality glasses will see messages from various brands. There will also be a game component in space, Phillips said.

“We have a design that starts in the public space, and you would [virtual reality] for the exterior, which will begin the experience,” Phillips said. “Once you get into the building, there will be a sequence of events that align with the different history and brand experiences as you travel through the building. It takes the technology and utilizes it in a way that is both exterior and interior to the physical space.”

Jamestown is working with AECOM Tishman to design the project, and JPMorgan Chase will provide the funding, though the landlord declined to provide details. S9 Architecture is the team’s design architect, SLCE Architects is the executive architect, DeSimone Consulting Engineers will handle structural engineering, and Tishman will also serve as construction manager, a Jamestown spokesperson said.

The redevelopment project is more than a year in the making, Harris said. At the beginning of the planning process, Jamestown solicited feedback from the Times Square Alliance, the non-profit organization dedicated to advancing local business and economic development in the square. The alliance even considered its own metaverse presence, but ultimately decided it would focus on the physical Times Square instead, Harris said.

“I applaud Jamestown for this investment in Times Square, and it just goes to show how much people care about Times Square,” Harris told CO. “We will work very closely with contractors and with Jamestown to ensure that the [process] is seamless with minimal impact on the neighborhood. … We are very excited about this level of investment and the creative vision for both Times Square and New York City.”

The redevelopment isn’t the only way Jamestown is integrating its real-world operations with the virtual universe. The company accepts rental payments in the form of cryptocurrency through a partnership with blockchain payment processing company BitPay, Jamestown announced on April 27.

“Customers want to pay for everyday things like food and rent in bitcoin or ethereum,” BitPay CEO Stephen Pair said in a statement at the time. “Working with Jamestown allows them to not only live on crypto, but also live and work in transformed spaces and innovation hubs in major cities.”

Those transformed spaces will soon include One Times Square, where construction began in April. While other real estate companies have been hesitant to trade cryptocurrency for cash, or build real estate in the metaverse due to the speculative nature of how such real estate is valued, Jamestown has moved forward in the virtual world. Now it puts its money where its mouth is – and $500 million at the same time.

Celia Young can be reached at: [email protected]†