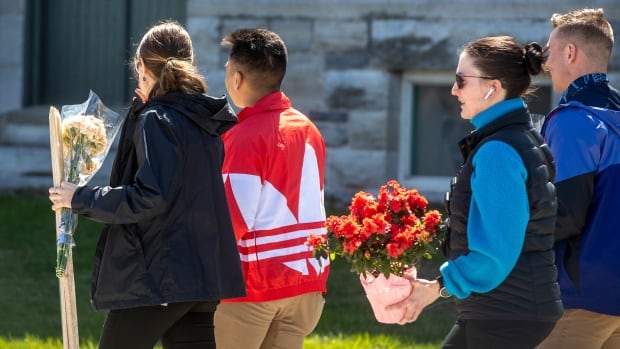 Kingston Mayor Bryan Paterson says his community feels a combination of shock and sadness over the loss of four Royal Military College cadets who died after their vehicle ended up in the water on campus early Friday.

“They’re from all over the country, but when they’re here, they’re as much a part of the Kingston community as anyone else,” Paterson said. “We are certainly mourning that loss.”

Paterson, an assistant professor at the RMC, said two of the cadets were in one of his classes several years ago, but he didn’t know them well. He refused to name them.

He said he expects there will be a funeral but had no details, saying the college would likely conduct it. He said he has given the city its full support and is heartbroken for the families, friends and fellow cadets.

“This is a time for us to work together, to stand together with the entire RMC community and with everyone who is currently going through a difficult time.”

The cadets were weeks away from completing their bachelor of arts degrees. Hogarth and Salek studied military and strategic studies and planned to become armored officers in the army.

Honciu is remembered by a former high school teacher as someone who is fairly quiet and shy, but also happy and full of energy.

“He always had a smile on his face and made everyone laugh,” said Richard Oki, who taught Honciu math in grades 9 and 10 at Northern Secondary School in Toronto.

“It was clear from early in grade 9 math that Andrei was a great student,” said Oki, adding that he hoped Honciu would become a post-secondary engineer. “His work was always impeccable and he was very smart, not only in math, but in many subjects. So he immediately stood out in the class.”

Oki said he was shocked by the news, especially given that Honciu was only weeks away from graduating. In addition to being academically strong, he was a leader on the school’s soccer team.

“I am not surprised that he had the courage and courage to represent our country,” said Oki.

‘Everyone is feeling down and out’: Queen’s student

Tyson Rudolph, a freshman at Queen’s University, did not know any of the cadets, but does know other students from RMC.

“Everyone is feeling down and out,” he said. “It’s really sad to hear.”

Doreen Vroegop, a resident of Kingston, said she was “in shock” when she heard the news.

“It broke my heart to hear that these young children, who have worked so hard to get to where they are today and their lives are just beginning… they are just being taken away.”

Few details have been made public, with officials citing the investigation, and several members of RMC have declined to speak.

Rory Fowler, a military attorney and retired lieutenant colonel, said the ranks usually close when an incident gets media attention.

“In fact, the only way you’ll find out… details of a military police investigation is if charges are filed.”

Fowler expects the initial investigation to take weeks. A more in-depth one, called a Commission of Inquiry, would likely take months, he said.