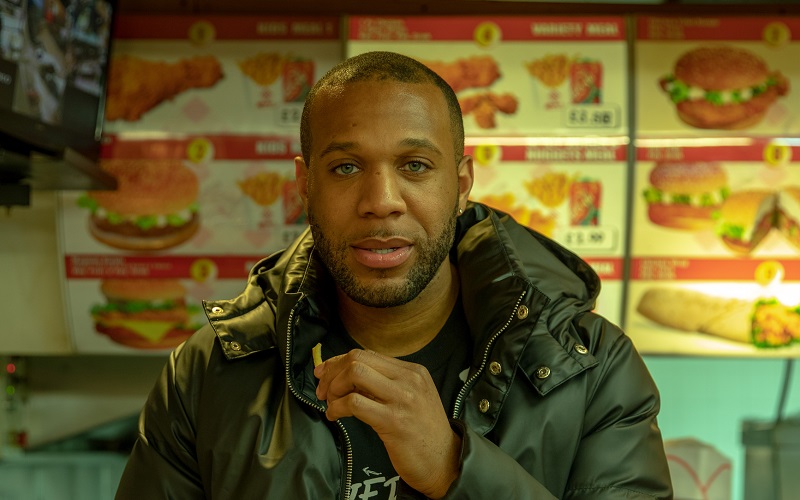 Corey Bovell’s Chicken Burger N Chips is a semi-biographical story of a young black man navigating life against a backdrop of gentrification and knife crime.

Chicken Burger N Chips was written and performed by South Londoner Corey Bovell and is based in part on his own experiences growing up in Lewisham.

Bovell’s show is part of a series at Brixton House that showcases the work of independent artists and freelancers from recent years.

While not all of his shows are created in this one autobiographical way, Bovell is no stranger to social commentary and using real life to inspire his stories.

He said: “I had a desire to tell a story about a young boy from South East London and I wanted it to be my story.

“Because I’m from Lewisham, was born and raised there, go to college and come back and still navigate through it, there’s a lot of change, but then there’s not much change in the way of crime.”

While there are issues with knife crime and gentrification in his own upbringing and thus in this story, Bovell also wanted to make sure the public understood that the situation is a lot more complex.

He added: “This is a young man who lives in Lewisham so things like knife crime take place and happen, things like gentrification, things like the closures of leisure centers and youth groups.

“These areas where young people can express themselves, outside of school hours to keep them out of trouble and let their minds be creative.

“These things have gone, they’ve been taken away, so it’s just about what else people are into, how they put themselves in those situations. I just want to tell that story.”

Bovell saw other one man shows and found that they “spoke their truth” and this is reflected throughout the story, with Bovell’s experiences as an adolescent growing up in Lewisham, going to Morley’s or hanging out with his friends.

The story not only touches on important issues, but also shows other young people that there are ways to express themselves creatively, through art and telling their stories.

Brixton House as a venue encourages emerging artists and this isn’t Bovell’s first time working with them.

Bovell hopes the story encourages people to realize that if their lives aren’t going in a positive direction, it’s possible to change paths. His show portrays various decisions and choices and the impact they have on both the character and those around him.

He said: “I wanted to dramatize a situation that has happened and that could happen in the near future so that people can see the impact of these decisions on themselves and everyone around them.

“If you dramatize it, you can see it and start a conversation.”

He also hopes to represent his congregation in different ways and to appeal to the public, to give them the feeling that they are seen by explaining what it feels like to grow up in a certain area, in a certain way of life.

By seeing themselves, or stories similar to theirs, they realize that they exist and are visible in society.

Chicken Burger N Chips will close the Housemates Festival at Brixton House from May 3-6.