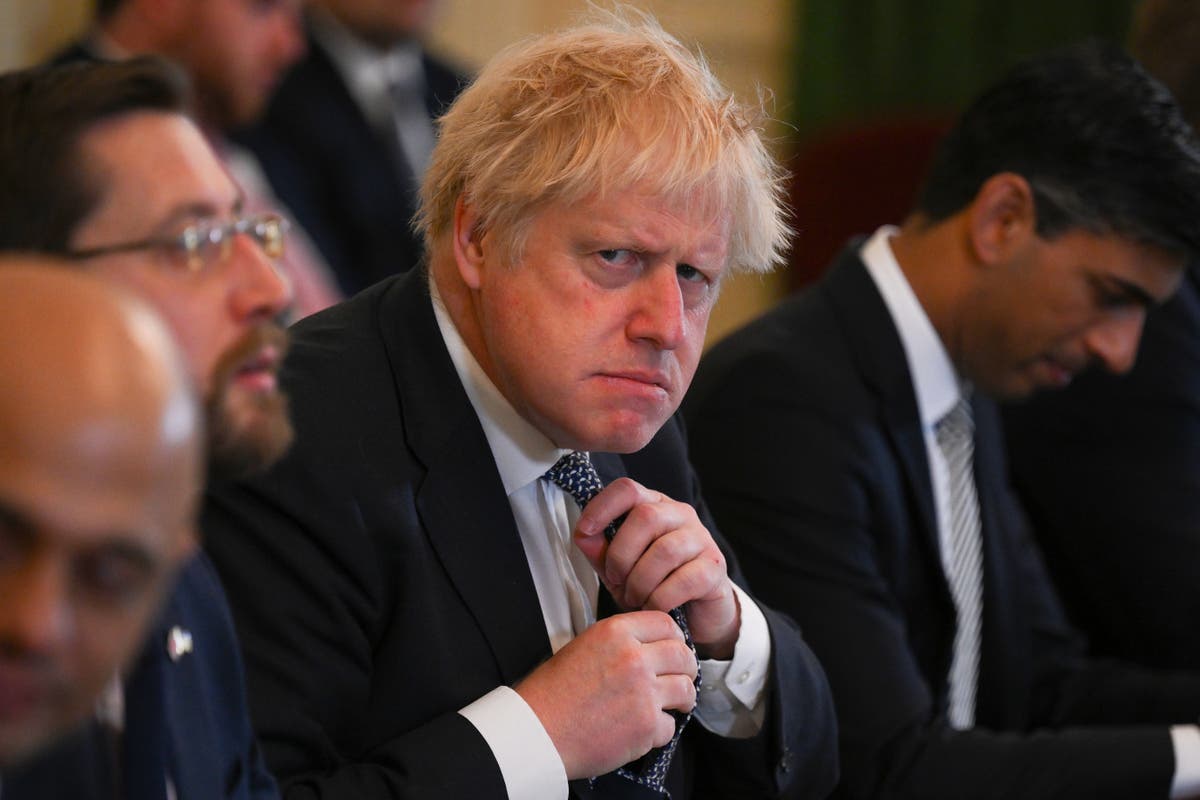 o10 braces for Sue Gray’s full partygate report, which could be released Wednesday.

The top official’s report is expected to be heavily critical of the culture in No. 10, which led to repeated violations of Covid restrictions.

In footage obtained by ITV, Mr Johnson appeared to be toasting a meeting to mark the departure of former spin doctor Lee Cain on 13 November.

Meanwhile, the Mirror published a photo of a man standing at a table with bottles of alcohol, allegedly taken during a meeting for Mr Johnson’s former official spokesman, James Slack, on Nov. 17.

Downing Street promised to make the findings public and to expect a press conference after the report was released.

Cabinet Minister George Eustice suggested that a new package of aid to deal with the rising cost of living would be unveiled within days.

Chancellor Rishi Sunak is thought to be finalizing a package that could be unveiled this week as the government tries to move further from the party gate ranks.

“It is my understanding that he (the chancellor) is looking at things and we may hear more this week,” the environment minister said.

“So we have to try to temper that inflation and that means showing some restraint, but still helping people, especially those on the lowest incomes, who will struggle with some of these price increases.”

Cabinet Secretary George Eustice has said he acknowledges public anger over a case where Downing Street staff slept on No. 10 benches after gatherings at a time when people were unable to attend the funerals of loved ones.

The Environment Minister told Sky News: “It’s not just the optic, it’s understandable that people feel anger because there were cases, yes, where people couldn’t attend the funerals of close friends, couldn’t visit loved ones.

“Of course we absolutely recognize that, the Prime Minister recognizes that, that’s why he has apologized for the shortcomings in No. 10 and for his own part in it.”

Mr Johnson “absolutely recognizes how angry people will feel and fully understands that and has apologized for it”.

George Eustice: the line had blurred between ‘what was acceptable and what was not’

A cabinet minister has acknowledged that the line between work and social activity in No. 10 was blurred during the coronavirus lockdowns.

While Westminster awaited the release of Sue Gray’s report on parties breaking the lockdown, George Eustice said: “What happened in No. 10 is clearly a culture that developed where they worked there, it was their workplace, and there were times when they have a drink at the end of the day.”

The environment secretary told Times Radio: “That line between what was acceptable and what was not blurred and that was a mistake and Sue Gray emphasized that in her first interim report and I think she will almost certainly say more about that when her final report comes out.

“The Prime Minister himself has accepted that and acknowledges that there were of course shortcomings and therefore there must be some changes in the way the business is run.”

Her highly anticipated first report on lockdown celebrations in Downing Street was released in January, albeit in heavily redacted form.

She was stripping details of her findings until an investigation by the Metropolitan Police was completed.

The first report was only nine pages long and outlined 16 events, 12 of which were investigated by Scotland Yard.

The report makes it clear that in response to the Met’s request not to publish details of events Scotland Yard was investigating, Ms Gray was “extremely limited” in what she could say.

“It is not currently possible to provide a meaningful report that sets out and analyzes the extensive factual information I have gathered,” she said.

However, she found that there had been “failures in leadership and judgment by various parts of No. 10 and the Cabinet” at various times.

It stated: “At least some of the meetings in question represent a serious failure to uphold not only the high standards expected of those who work at the heart of the government, but also the standards set by the entire government at the time.” British population were expected.”

In her conclusion, Ms Gray noted that “significant lessons can be learned” from the events that “need to be dealt with immediately by the entire government”.

The report said: “This does not have to wait for the police investigation to be completed.”

Welcome to the Standard’s live political blog on what looks to be a memorable day in Westminster.

Official Sue Gray’s full report on lockdown celebrations in Whitehall during lockdowns is expected to be published later today.

We were able to hear about it as early as 12:30 – right after the Prime Minister’s questions – in which Boris Johnson will address MPs in the House of Commons.

However, Downing Street has said the timing could shift depending on when they receive the report, which will be handed over sometime this morning.

The Prime Minister will also chair a press conference in Downing Street and meet the 1922 Committee of Backbench Tories later on Wednesday.

We’ll bring you live updates as soon as we have them, so stay tuned…