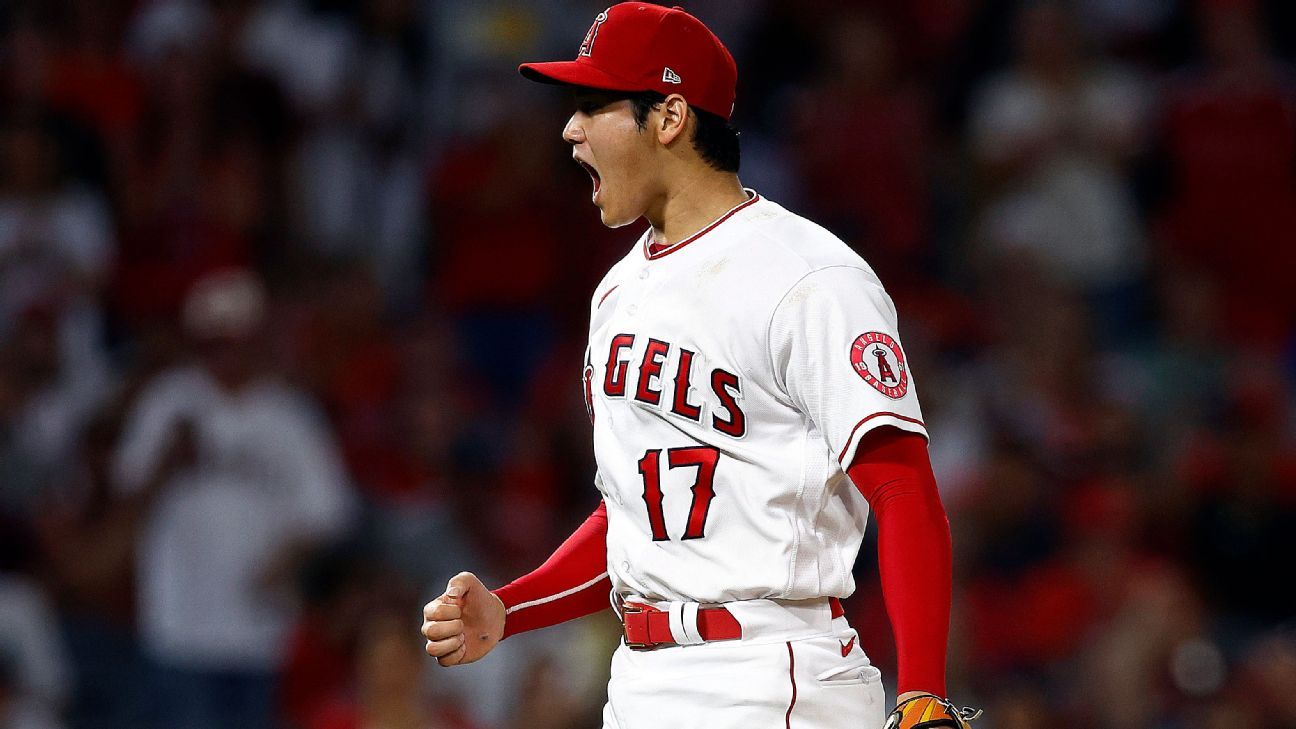 ANAHEIM, Calif. — Shohei Ohtani adheres to strict routines in almost every aspect of his life. When his final start on the mound was delayed 12 minutes by a pregame ceremony honoring the Los Angeles Angels’ 2002 World Series champions, his painstaking preparation took a dent before he even threw a pitch.

A slightly bumpy start still led to a second consecutive incredible night for the two-way superstar.

Ohtani hit a career-high 13 over eight dominant innings of two-hit ball, and the American League MVP also reached base three times in Los Angeles’ 5-0 win over the Kansas City Royals on Wednesday.

After giving up two basehits to start that delayed first inning, Ohtani (6-4) retired 16 consecutive Royals and 23 of the last 24 batters he faced. While equaling the longest start of his major league career, he allowed only one baserunner in his last seven innings — on a walk that was quickly wiped out by a double play.

“I think the most important thing was to get that out in the first inning after giving up those first two hits,” Ohtani said through his translator. “I was able to do that, and it set the tone for the game. I wanted to go as long as possible, but I wasn’t really thinking about the number of pitches at the beginning of the game.”

Against the backdrop of a rare Southern California thunderstorm that lit up the skies well beyond the midfield at the Big A, Ohtani also had a single and two walks on record in his latest exciting two-way performance.

One night after Ohtani hit two three-run homeruns and had eight career runs in a loss in an extra inning, he set a personal best for strikeouts by fanning Emmanuel Rivera on his 108th and final pitch.

“He just put us on his back,” said Angels interim manager Phil Nevin. “I thought about taking him to the eighth, and he was adamant, ‘No. This is mine. I’m staying.’ … What a day. What a performance from him.”

David MacKinnon got his first Major League-hit with an RBI-single in the seventh for the Angels, who avoided a series sweep with their fourth win in six games in total. Luis Rengifo had an RBI double in the seventh before scoring on that single to the right by MacKinnon, who got his first RBI of his career two innings earlier with a sacrifice fly.

After scoring 18 runs in the previous two games at Angel Stadium, the Royals were eliminated for the second time in four days and the 10th time this season. Kansas City has still won five out of seven.

“That was a showing,” said Royals manager Mike Matheny. “It’s a very unique repertoire of pitches. I don’t think you’ll find that many guys with as many weapons as what we saw today. He threw three different sliders, plus a cutter and a curve. When the split started going, then started the strikeouts really happen, and he’s got 100 (mph) in the tank that he almost never showed. … It’s going to be a rough day at the plate.”

Ohtani has been unbeatable on the mound lately, giving up only one run in his past 20 innings over three starts. In his most recent home start, two weeks ago, he threw seven innings with a one-run ball and also homered in a win that broke the Angels’ franchise record of 14 games.

Whit Merrifield and Andrew Benintendi singled in the first two at bats of the Royals against Ohtani, but he then put down every batter he faced until Merrifield walked with one out in the sixth — and Benintendi quickly grounded into a double play.

Ohtani’s fastball hit 99 mph twice in the second half of his start, smashing Kansas City and getting a whopping 34 combined swing-and-misses or call strikes.

Daniel Lynch (3-7) wasn’t very effective for the Royals early on, but the lefthander resourcefully eliminated the Angels until they got the bases loaded in the fifth after two walks and a single into the field. Lynch, who left on MacKinnon’s sacrifice fly, gave up three hits and five walks on a career-high 104 pitches.

Mike Trout was given a day of rest for the Angels, which left their struggling lineup decidedly lacking in punch. But MacKinnon came through as the team’s unlikely clean-up, getting the first major league hit after being called up to his MLB debut last weekend.

MacKinnon was happy with his breakthrough swings, but other aspects of the game also got him excited.

“I have to play the field behind Shohei and see how good he is,” MacKinnon said. “It’s crazy to be here.”

Royals: Salvador Perez was out after re-injuring his left thumb on a swing on Tuesday night, but Matheny said the team is still assessing the severity of the injury after an MRI exam.

Royals: Zack Greinke is expected to come off the injured list Friday to start when Kansas City opens a three-game weekend series at home against Oakland. Greinke (0-4, 5.05 ERA) went into the IL three weeks ago with a strained forearm.

Angels: After a day off at home, Los Angeles opens a weekend series of three games against Seattle on Friday evening. Neither team had confirmed a starter.