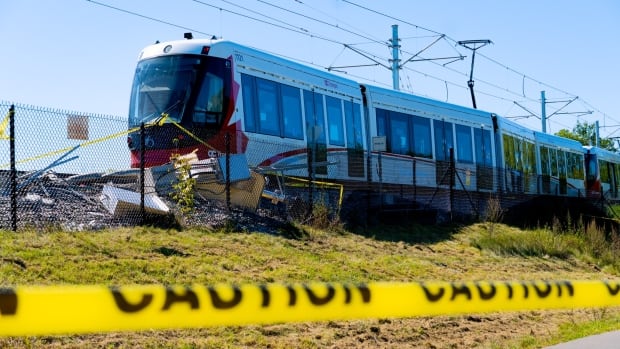 The Ottawa Light Rail Public Inquiry Committee wants to hear from residents who may have had problems with the Confederation Line as the first public event kicks off today.

This week will begin the county-ordered investigation into what may have led to the Confederation Line’s many problems — including the two mainline derailments — since its launch in September 2019.

Prior to testimony from key witnesses involved in the design, construction and oversight of the LRT, the committee would like to hear from riders.

“LRT is part of public life in Ottawa. It’s an important system,” said Kate McGrann, a co-lead counsel on the commission. “I would encourage people not to edit themselves. If they have an experience that has influenced them in any way regarding their use of the LRT, we encourage them to come forward.”

On Wednesday and Thursday, the committee will hear from the public at the Shaw Center about their experiences with the Confederation Line.

The testimonials run from 7 p.m. to 9 p.m. and there are still spots available for Thursday evening.

McGrann said people who can’t come in person, or who aren’t comfortable speaking publicly, can email or call the committee. They even encourage video messages.

“If you have information about your experiences, the committee is very interested to hear it,” she said. “We think it’s a very important part of the committee’s work.”

Anyone interested in sharing their comments with the committee, even beyond the two nights set aside this week for public statements, can reach the investigative team at [email protected] or by calling 1-833-597-1955.

The progressive Conservative government called for a public inquiry last November after Ottawa City Council declined to conduct its own investigationinstead, choose to ask the city’s inspector general to investigate.

The decision also came on the heels of CBC, which reported that one of the city’s outside advisers on the LRT, Brian Guest, wrote in an email that Bob Chiarelli’s support for an investigation “beaded” him.

A week later, on November 17, CBC reported that: former transit boss John Manconi was aware of reliability issues with the 12.5-kilometer east-west Confederation Line, just weeks before the system was adopted.

That same day, the PC cabinet announced it would host a public inquiry, but not before Ottawa Mayor Jim Watson wrote a five-page letter to then-Secretary of Transportation Caroline Mulroney requesting her to be notified. before asking for an inquiry.

The commission was formally established on December 16 and Judge William Hourigan was appointed to lead it.

The investigation is mandated to investigate commercial and technical issues that led to the Confederation Line disruptions and the two derailments last year. It also looks at the city’s oversight of the project and compliance with laws and safety standards.

A train was leaving Tunney’s Pasture station over the weekend when one of its axles became detached from the rails, forcing OC Transpo to shut down the entire line while officials investigate.

The commission has already heard dozens of witnesses and the city alone has produced more than 500,000 documents for the investigation.

Attorneys for the commission spoke to many people in the city, including Watson, as well as representatives from builders Rideau Transit Group (RTG) and maintenance managers Rideau Transit Maintenance, plus Alstom, the French company that built the trains.

Some of these key players will be called to testify at the investigation’s public hearing, which begins June 13 at the University of Ottawa. The proceedings will be streamed live in English and French and broadcast on Rogers TV.

It is expected that an enormous amount of information will be provided during this period.

Witnesses are scheduled to testify from 9 a.m. to 9 p.m. for four weeks, until July 8. The transcripts of their testimony will be uploaded to the commission’s website the following day.

While the investigation often resembles a trial — it takes place in a college law school courtroom, attorneys from approved parties can cross-examine witnesses, and is led by an appellate judge — there will be no pleas of guilt or liability, nor can the commission to order someone to pay someone else money.

The Commissioner will look at past circumstances that may have led to problems with the Confederation Line, as well as make recommendations for future projects to avoid similar problems.

Despite the size and complexity of the $2.1 billion project, the hundreds of thousands of documents it examines, and the many witnesses it interrogates, the timeline for the commission is fast.

It was not operational until early 2022, but has been instructed by the government to present a final report by the end of August, with a possible extension until November.