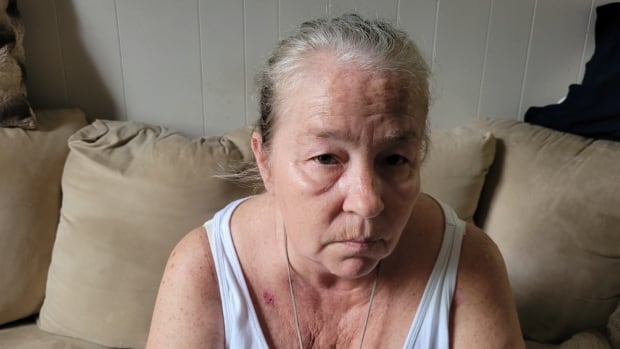 A man from Deseronto, Ontario, is frustrated after it took a doctor’s appointment and multiple ER visits to learn that his wife had several mini-strokes.

Mark Janes took his wife Lori Toth to Lennox and Addington County General Hospital in nearby Napanee on June 13.

“She was dragging her leg and her speech was all messed up, so I rushed her to” [the hospital],” he said.

Janes said he wasn’t allowed into the hospital because of the COVID-19 protocols, so he waited in the car. After about eight hours, Toth sent a text asking to be picked up.

“I went to the front door and grabbed her and tried to explain to her what was going on. She really couldn’t understand or couldn’t talk or something,” he said.

Despite his concerns, Janes said he trusted the hospital’s decision to release Toth, so he took her home.

However, when Toth’s condition worsened, they went to see their GP two days later.

They were advised to go immediately to Kingston General Hospital, where they had to wait another 13 hours before seeing a doctor in the emergency room.

It just baffles me that they would send someone home in that condition.– Mark Janes

“They took her for a test, came back and confirmed multiple mini-strokes,” Janes said.

Toth was hospitalized for a week before being transferred to a Providence Care Hospital, where she remained for another two weeks.

She returned home last week and Janes said she is doing better now, although she still suffers from short-term memory loss and mild speech impediment.

While he is grateful for the care his wife received, Janes said he would like more clarity on what happened at the first hospital.

Janes approached it for answers through its website, but never got a response.

“I’m just amazed they would send someone home in that condition,” Janes said.

“She could have been dead and they just sent her away.”

She said system capacity is being stretched, which may have contributed to longer wait times in the emergency department.

“There’s no denying that our healthcare system is under tremendous pressure,” she said.

“We are at historic highs for key indicators such as ambulance discharge times. We are also seeing an increased number of patients seeking care in the emergency department.”

She also said that while patients are encouraged to only attend outpatient appointments and visits to the emergency department, they are allowed to have one visitor if physical distancing can be maintained. Caregivers are always allowed to accompany patients.

Patient advocacy is needed now more than ever

Paige Lennox, a registered nurse and the founder and CEO of Canadian Health Advocates Inc., said staff shortages, emergency departments and a lack of beds are making experiences like Toth’s more common.

“We don’t want people to be fired without the right resources, or to be fired prematurely,” she said.

“So taking a proactive approach and really advocating for yourself is so important and unfortunate.”

Really standing up for yourself is so important and unfortunate.– Paige Lennox, Canadian Health Advocates Inc.

Lennox said one of the ways to do that is by contacting the hospital’s discharge planner, but she acknowledges that patients can’t always do this alone.

She said her team of 14 nurses across Canada work with patients to attend medical appointments, communicate with hospital staff and keep their loved ones informed.

“It doesn’t have to be one of us. It could be a family or a friend…even if it’s just on a speaker.”