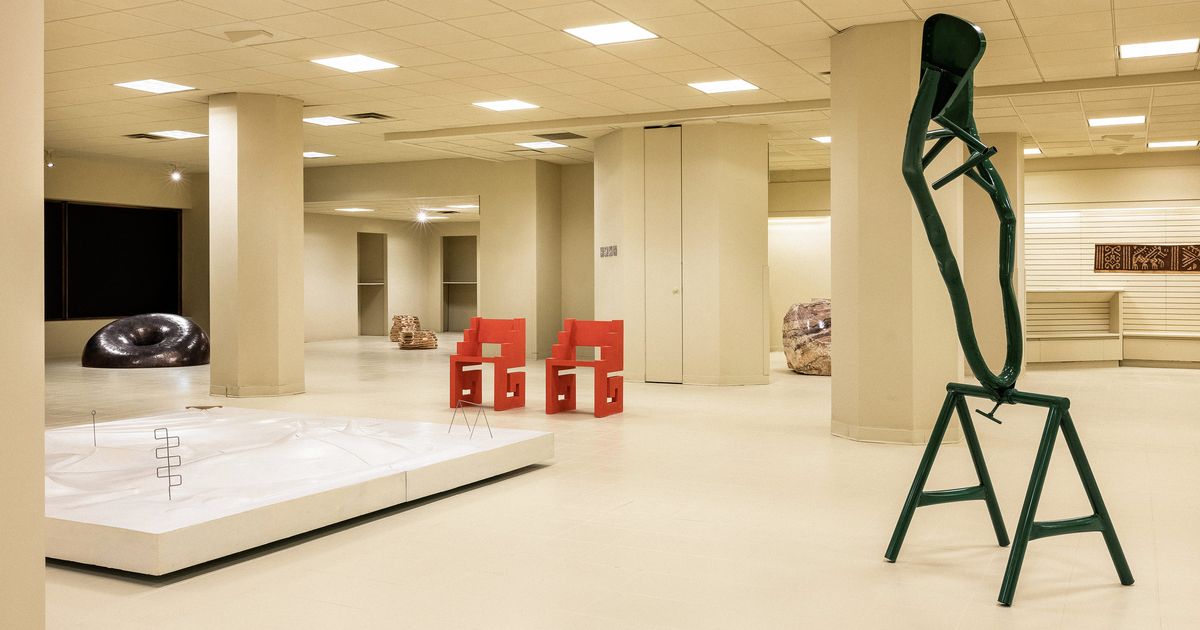 MASA, a gallery based in Mexico City, has an exhibition of contemporary design that includes two chairs by Pedro Reyes, Isamu Noguchi’s model for a playground inspired by Teotihuacan, and sculptures by Miguel Calderón.
Photo: Caylon Hackwith

In the 1930s, Isamu Noguchi had an affair with Frida Kahlo while living and working in Mexico City. Judging by the amorous letters he sent her, things didn’t end well. “Forgive me dear I wasn’t everything I should have been – maybe when we meet again (I hope soon) when we love again I’ll have the courage and humility to be very real,” he wrote in one of them. The relationship seemed to have an impact on his work. In 1937 he developed a proposal for a mural with motifs carved from Kahlo’s iconography: a fetus, a heart, an openwork depiction of a body with its skeleton. The mural was never sculpted, but Noguchi’s study for the mural can now be seen at †Intervención/Intersección”, a new exhibition from the itinerant gallery MASA in Mexico City in a decommissioned post office in Rockefeller Center.

“This is really the centerpiece of the show,” said Su Wu, the exhibit’s curator. “We emphasize the power of gossip and love affairs – the role all these things, which are seriously non-academic, play in creating what we mean by art or design history. We find space for intimacy and private stories.”

Above a sofa by Hector Esrawe hangs a study for an unrealized mural by Isamu Noguchi.
Photo: Caylon Hackwith

Artists have a long history of finding intimacy and kinship in Mexico City, as does Noguchi. He went to Mexico after failing to get a Works Progress Administration commission for a playground in New York City, where he managed to land his first public commission, a socialist mural on the second floor of a public house. market. “How different Mexico was!” Noguchi wrote about his experience. “Here I suddenly didn’t feel strange as an artist. All the artists were useful people, part of the community.” This sensibility fostered a “creative porosity,” as Wu describes the city’s openness to artists, which still defines the contemporary art and design landscape in Mexico City today. The co-founders of MASA, Hector Esrawe, Age Salajöe and Brian Thoreen, who are from Mexico City, Estonia and Los Angeles respectively, are an example of this. Wu also moved there in 2017 and quickly found a place for himself in the center of the city’s creative scene. The show she has curated reflects the openness of the city and the work that can come from mixing cultural influences.

Architect Frida Escobedo designed a chair from tiny ball chains as a tribute to Cuban-American artist Ana Mendieta (above). Cast metal stools from EWE Studio are locked in a storage cage (bottom left). The lamps around a table by Panorammma are made of rawhide, inspired by the bones left over from dinner parties and created by the design studio Marrow, a side project of Casa Bosques founder Rafael Prieto and Loup Sarion (bottom right). Photos: Caylon Hackwith.

Throughout the exhibition we see how artists have tapped into deeply personal references. Architect Frida Escobedo, who designs the new modern and contemporary wing of the Metropolitan Museum of Art, contributed a piece in tribute to Ana Mendieta, the Cuban-American artist whose work has long been overshadowed by the circumstances surrounding her death, which some believe that it is at the hands of her partner, artist Carl Andre. Escobedos creek bank Mendieta’s references Creek† a 1974 film in which the artist emerges naked from rocky water. The sofa is made of hundreds of strands of tiny ball chains, mimicking the fluidity on the screen. A steel table with a lumpy rawhide surface stitched together and a pink silicone embellished with sutures from emerging design studio Panorammma can clearly look like surgically repaired skin and hint at the founder’s chemotherapy and hospital stays. The exhibition continues in the public square, with sculptures by Alma Allen, stone chairs by Mario García Torres and an installation by Pia Camil of shirts, pants and dresses donated to her by residents of Mexico City and are like flags around the ice rink. hung up. Camil describes clothing as the most intimate items a person has; they ‘contain our sweat and our secrets; they testify to our moments of joy and sorrow,” she writes. Seeing these items hanging in the square where flags of the world normally fly brings a sense of intimacy and familiarity to the monumental space.

The artist Pia Camil hung clothes donated by residents of Mexico City around Rockefeller Center’s plaza. She describes clothing as intimate objects that “contain our sweat and secrets; they testify to our moments of joy and sorrow.”
Photo: Caylon Hackwith

Fittingly, most of the show is set in a former post office, a place where objects and ideas can be moved through correspondence, like the letters Noguchi sent to Kahlo. The setting is not accidental; it reflects MASA’s nomadic strategy. The choice to exhibit in obscure locations stems from a desire to challenge conventional expectations about how we perceive art and design – usually in sterile environments devoid of character. Experimenting with different locations often results in exhibitions that are less showcases of precious objects and more often surreal, immersive environments where the setting influences how the works are seen. The inaugural show, in 2019, took place in a 1970s mansion in Mexico City that was infamous for being the site of a horrific murder, which the gallery did with red carpets and walls – a striking contrast to the minimalist works . A “castle” built by German expats was the site of a 2020 exhibition. The house, clad in dark wood walls, looked as if it was haunted with the furniture shown in the show. The venue of the 2021 exhibition, “The Last Tenant”, was a 1950s Modernist house with very little documentation of its history, inspiring the gallery to imagine the daily habits of its last occupant and tell a story about to invent him.

The exhibition builds on a history of artists moving between New York City and Mexico City. One of the items addressing this theme is Ana Pellicer’s solid pin for the Statue of Liberty, made using a 500-year-old Michoacán hammered copper technique.
Photo: Caylon Hackwith

‘Intervención/Intersección’ retains many of the Post Office’s interior features—the drop ceiling, fluorescent lights, storage cages, and display shelves—but they’re all covered in creamy beige paint, a palimpsest of what came before. The design pieces work in tandem with these elements: they are hung from the ceiling and displayed on the post office counter; and in one case, a set of EWE metal crutches is locked in a mail storage cage. MASA chooses its spaces based on a gut feeling, but what happens when everything is put together, like in the old post office, can feel ‘accidental’, says Thoreen.