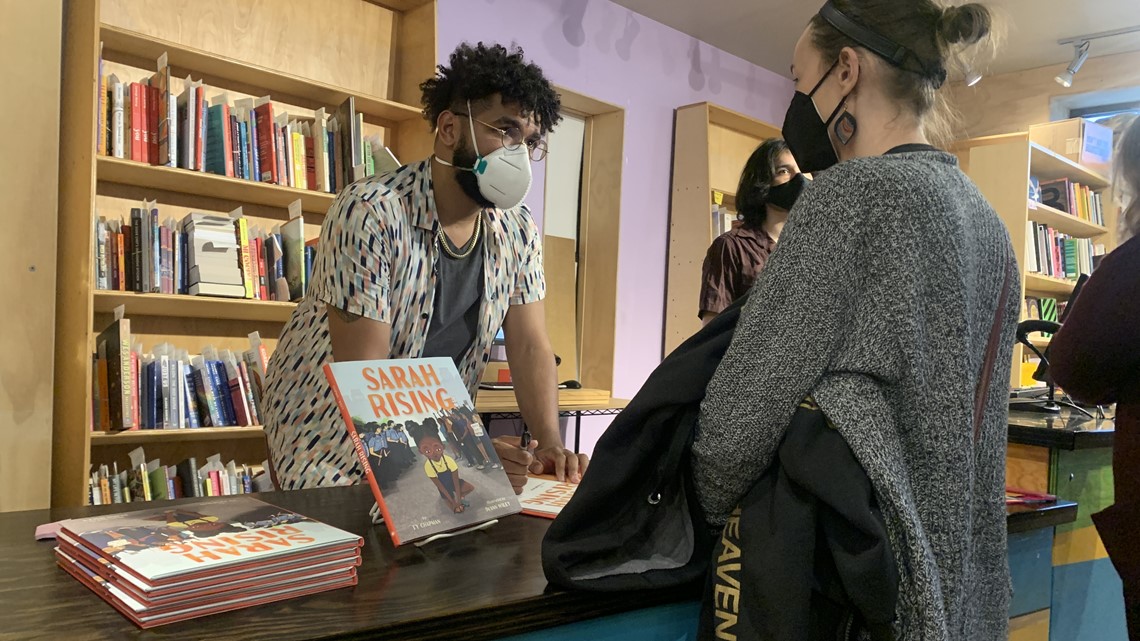 With the new book “Sarah Rising,” author Ty Chapman aims to provide families and educators with a resource to help children cope with racial injustice and community response.

MINNEAPOLIS — Two years ago, Ty Chapman felt he should do more than protest. After the murder of George Floyd, he felt, like many others, called to action.

Chapman, who had spent most of his artistic career as a puppeteer, had already started writing children’s books. Now he was faced with a project that felt immediate.

“I thought a lot about the historical events that I had experienced in my childhood, and the first thing that came to my mind was 9/11,” Chapman said. “I was five when 9/11 happened and I had no real context for what happened. I just wanted to make sure the uprising wasn’t like that for today’s kids.”

He began the process of writing Sarah Rising: a story of a young black girl who attends her first-ever protest against social justice with her father, in response to the police killings of black people. In the book, the young girl, initially afraid of the protest, learns the importance of ‘standing up for what is right’.

He said it was cathartic, but also emotionally challenging.

“There were times when I just had to put the project down and just process it,” Chapman said.

But his drive to provide families and educators with a tool to help children understand racial injustice has kept him going.

“It can be hard to just let your kids sit and [say]”We’re going to talk about police killings now,” Chapman said. “It’s a little easier when you have a book that you can read together.”

In the book, Sarah gets scared during the protest. Losing sight of her father, she sees a police officer knock down and injure a monarch butterfly. Chapman says the metaphor is personal. He is from Texas, and at a young age his mother moved the family to Minnesota after someone committed a hate crime in the area where they lived. She hoped Minnesota would be safer.

“I’ve always had an affinity for monarchs because they fly from the Gulf of Mexico to Canada and back,” he said. “That trip always resonated with me on a personal level. I also thought about images for black royalty. Black kings and queens being cut down.”

The book is illustrated by DeAnn Wiley, an artist Chapman was eager to collaborate with.

“A big kudos to DeAnn Wiley, who did a great job with it,” said Chapman. “There’s one in the book where Sarah is reunited with her father and you see murals of George Floyd and Breonna Taylor in the background. It hits hard, but it’s spooky in the best way.”

RELATED: ‘I Didn’t Think I’d Ever Be Back’: Minneapolis North Director Mauri Friestleben Speaks to KARE 11

Chapman says his other favorite part is the ending, when the frost heals and Sarah releases it back into nature.

Check out the latest coverage of the KARE11 Sunrise in our YouTube playlist: