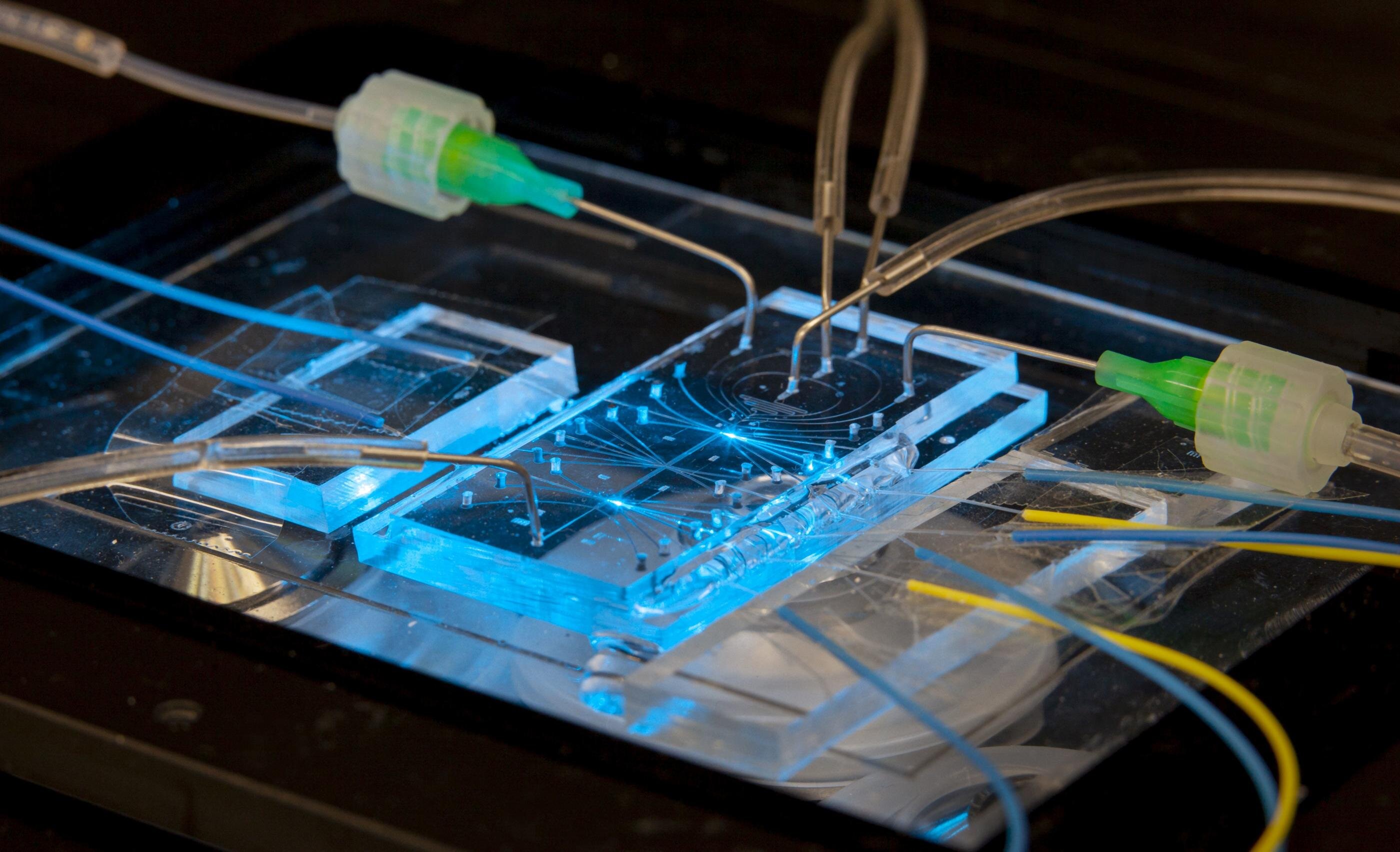 Measuring the numbers and properties of cells moving in a flow — a process called flow cytometry — is critical to diagnostic medicine, pharmaceutical research and biomedical science. Now researchers at the National Institute of Standards and Technology (NIST) have devised a way to make unprecedented improvements in technology.

Flow cytometry typically involves marking cells with fluorescent material, shining laser light on them as they cross a certain point in a fluid channel about the size of a human hair — narrow enough to generally move the cells in one file — and recording the light emitted by the markings on the cell. Analyzing the emissions reveals several characteristics, such as cell type, size, DNA content and stage in the cell division cycle.

But the conventional single-measurement method lacks a means of quantifying the variations in the readings. For example, a cytometer that measures cancer biomarkers can use a specific metric to decide between healthy or diseased cells. One cell may return a slightly lower value, identifying it as healthy. But the range of values ​​that the instrument can return for repeated measurements of this cell is unknown.

This is problematic because it is not known how often the value can misrepresent the diagnosis. For example, high confidence is necessary when counting circulating tumor cells leading to cancer metastasis; there can be only one tumor cell for every million others in a blood sample. Improving the ability to resolve these rare events could lead to earlier detection and better treatment options.

Likewise, inaccurate counts of different cell populations, such as immune cells, in a sample can lead to an incorrect diagnosis of the disease or a misinterpretation of whether drug treatment was successful. It can be difficult to tell whether different measurements arise from different cell types or just experimental variability.

To address that situation, the NIST researchers created and validated a new system that directly records the amount of variation in flow cytometry measurements to quantify uncertainty. Their instrument makes a series of multiple measurements of the same particle whose position and velocity are precisely controlled as it moves in the channel, allowing them to observe measurement-dependent variations of as little as 1%.

“This is the first time we can directly measure uncertainty per object in a flow cytometer,” said Matthew DiSalvo, lead author of the NIST team that reported the results July 20, 2022 in the journal. Lab on a chip. “If you measure something once, and only once, you can’t verify the precision,” he said. “You need repeatability for that.”

The new chip-scale serial flow cytometer addresses this problem by taking four measurements of each particle: two measurements at each of two different points separated by 16 millimeters; (about 0.6 inches) in the channel at flow rates as high as 100 or more particles per second.

Several critical challenges had to be overcome to create the new cytometer, which was initially tested with uniform plastic beads about 15 micrometers (µm, millionths of a meter) in diameter, about one-tenth the width of a human hair and the same size. as average white blood cells.

One challenge was to fabricate a channel (approximately 40 µm by 80 µm) containing two identical zones in which laser light was applied to the passing particle and to ensure that the largest amount of emitted fluorescent light was collected by a pair of detectors measured in both upstream and downstream. To do this, DiSalvo and project leader Gregory Cooksey developed advanced waveguides that minimized the loss and kept the emitted light from scattering. Cooksey has extensive experience in pioneering microfluidics design, and the cytometer team drew from that body of work.

Another particularly demanding challenge was finding a way to ensure that the emissions recorded in each of the two zones in the channel came from the same particle. This was only possible by controlling the position and speed of the particle so precisely that the time of the transition from one node to another was precisely known, allowing the system to match the measurements at the first node with those at the second.

To do this, the researchers developed a “hybrid” technique to focus the particle at a specific point in the channel. In conventional cytometers, this is usually done by using two different liquid pumps: one to inject the particles and one to create a separate liquid envelope around the inner perimeter of the channel, effectively forming a liquid tube in the solid channel. That works to confine the sample in the central core of the channel.

Or at least, that’s the guess. But in fact, Cooksey said, in small channels “that’s the worst possible place you could put it.”

The reason is that the inertia of the liquid in small channels adds two forces to the particle. One force works to lift the particle off the wall. But another force pushes the particle away from the center of the channel because of the difference in fluid velocity on either side of the particle. As a result, the particle naturally tends to move off center to an equilibrium position where the forces are in equilibrium. For the specific design used in this study, the displacement from the centerline varies with the velocity of the fluid, from approximately 11 µm at 0.75 meters per second to 14 µm at 1.35 m/s.

To control that position very precisely, DiSalvo and Cooksey used four pumps to drive the sleeve, allowing them to adjust the pressure from side to side as well as top to bottom. “We use the hydrodynamics to place the particle at the beginning of its transit at the position we know it wants to go,” DiSalvo said. “So when a particle accelerates through the channel, it’s already in its equilibrium position. That’s maintained very tightly throughout the length of the cytometer.”

This enables the device to make very accurate measurements where the particles move with a high throughput speed of 1 m/s. (1 m/s, or about 2.3 mph, may seem slow. But at that speed, a 10 µm particle moves 100,000 times its body length per second. A car doing that would travel about 1 million mph.)

Since the experiments were reported in the new journal article, the team has been measuring white blood cells in the device. “The first thing we looked at is where the cell is in its division cycle,” Cooksey said. “We observe how much DNA is in the cell. The fluorescent signal allows us to quantify how much of the cells are actively dividing and undergoing DNA synthesis.”

The researchers also use different laser wavelengths to reveal different properties of the sample.

“We extensively modified the waveguides to increase sensitivity by incorporating microlenses and other improvements,” DiSalvo said. “We believe we will soon be able to provide uncertainty measurements while matching the sensitivity of commercial single measurement systems that cost hundreds of thousands of dollars.”

The cytometer project involves collaborators with expertise in mathematics and modelling, leading to additional new analytical methods that will improve quantification and classification. NIST researchers Paul Patrone and Anthony Kearsley have used signal analysis to separate measurement variations due to flow variations and particle size. Their methods also provide an unparalleled ability to identify and separate objects that would previously have been too close together to distinguish in a conventional measurement. Failure to distinguish individual objects prevents counting accuracy and can lead to missing unique sample components, such as circulating tumor cells or interacting immune cells.

A stopwatch for nanofluids: NIST files provisional patent for microflowmeter

Provided by National Institute of Standards and Technology

This document is copyrighted. Other than fair dealing for personal study or research, nothing may be reproduced without written permission. The content is provided for informational purposes only.