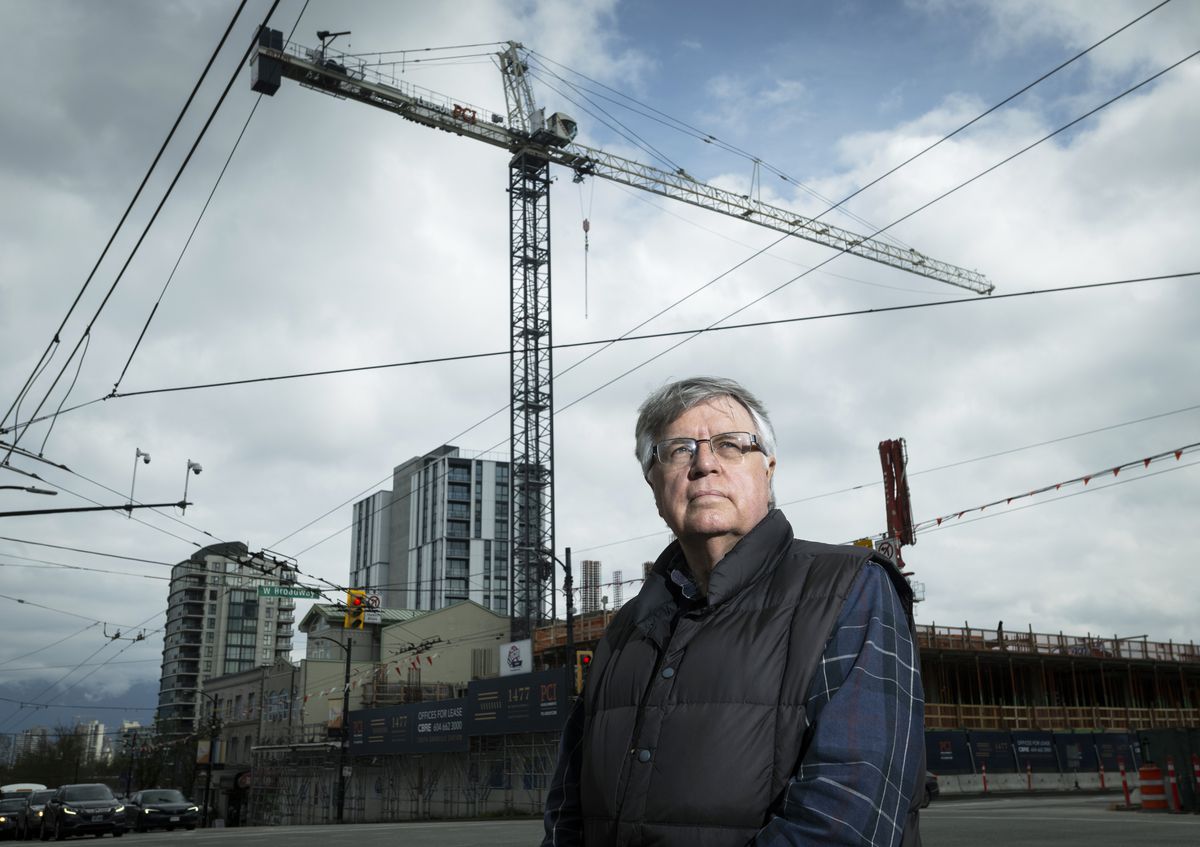 Housing Secretary David Eby says he can’t wait to cut the ribbon on the newly approved 39-story mixed-use tower on the corner of Granville and Broadway, site of an upcoming express train station.

Mr Eby, who is also the Attorney General, wrote a letter of support to the city on government letterhead, as did Environment Secretary George Heyman, MLA for the driving. Their support was part of the repurposing process for the tower at 1477 W. Broadway, which included three nights of public hearings before a decision on April 26.

PCI Developments had begun construction on a five-story commercial building that had been approved under existing zoning, but last fall the developer filed an application to repurpose the tallest tower in the corridor. The tower will include 223 rental homes, 45 of which are permanently below market rent for middle-income households, as well as offices and retail, above the South Granville Subway Station which is part of the Broadway Subway line, from Clark Drive to Vine Street in Kitsilano.

Nine councilors voted in favour, Jean Swanson and Colleen Hardwick voted against. The tower will set the tone for South Granville, a mid-rise residential area with a central shopping area close to downtown.

There is pressure to add significant density in response to much-needed rental housing as Vancouver grows, particularly along the future Broadway subway corridor. But how to achieve that density and even the question of how much is needed, at what pace, is a polarizing ideological debate – and the tower in its built form is the lightning rod.

An increase in land value is a major concern when introducing towers into neighborhoods with older rental stock. As history has shown, higher values ​​bring transformation without policies to protect tenants. Tenant rights advocates have expressed concerns about renovation and gentrification.

Mr Eby said he is also concerned about displaced tenants – but if land value is an issue, that horse has left the barn.

“The ground lift around the older low-rise rental buildings is already underway, due to the SkyTrain investment,” Mr Eby said in an interview. “So what’s going to protect those tenants isn’t refusing to build rental properties that we know are desperately needed.”

Without the tower, Mr Eby said, those tenants in the 233 units would have competed for that existing housing stock. Instead, they will live above a transit station.

“That said, I don’t think those concerns about those renters in more affordable rental housing are misplaced. We saw what happened in Burnaby, where there was not enough protection for tenants around redevelopment.”

Mr Eby referred to the mass evictions that took place after the repurposing of transit-oriented Metrotown five years ago. The mayor of Burnaby argued at the time that redevelopment of affordable rental housing from the 1960s and 1970s was necessary to maximize the density potential around the transit station. Current Mayor Mike Hurley and the City Council have pushed for major new rental projects while introducing aggressive tenant protections. mr. Eby praised Burnaby’s approach, which gives displaced tenants the opportunity to return to the redeveloped site of their former apartment for the same rent, with small annual increases allowed by the Housing Rental Act. If they do not return, their former unit will be rented out at 20 percent below the market median rent as defined by the Canada Mortgage and Housing Corporation.

Mr Eby wants to standardize tenant protection in all municipalities so that those displaced by redevelopment can return to affordable rent.

“I suspect that without aggressive measures to protect the tenants, very few people would return. So care must be taken that redevelopment does not worsen our housing situation, and many municipalities have taken measures to ensure that tenants are protected. But there is a gap between cities and approaches; and when we look at rapid transit, it doesn’t matter if it’s Surrey/Langley or the Broadway Corridor extension, or even a high-speed bus system, we know that’s putting pressure on rental properties in those areas, around risks of reduced affordability and temptations of landlords to evict people en masse.

“I think there is a provincial role to provide a standard response.”

Andy Yan, director of the Simon Fraser University City Program, used census data and data from the City of Vancouver to analyze the Broadway Plan study area between 1st Avenue and West 16th Avenue and Clark Drive and Vine Street. He found about 24,900 tenant households in the area — or more than one in 10 of the city’s tenants.

There are 1,291 purpose-built rental buildings in that area, and the vast majority were built in 1970 or earlier.

“By the time market units filter out to become affordable, they are now focused on redevelopment. Therein lies a huge problem,” said Mr. Yan.

A spokesman for the City of Vancouver objected that the Broadway Plan area is not targeted at existing dense tenant communities.

“The Broadway Plan proposes the highest densities for new housing and mixed-use development in areas with relatively fewer tenants, including station areas and [neighbourhood] centers rather than targeting existing apartment areas for significant short-term changes,” the spokesperson said in an email.

Architect Brian Palmquist has spent a lot of time studying the draft of the Broadway plan, which goes to council on May 18. A staff report will be posted online this week.

He said the plan is unnecessarily complicated, so he’s trying to decipher it. His modeling of the plan has expanded to the max, with dozens of towers that may have been allowed by neighborhoods.

He says that increasing the number of zones only increases complexity.

“High-rise buildings are litmus paper, if you will. They are so visible that they cause this fear,” said Mr Palmquist. “It’s not just the amount of towers, there’s a huge trust issue involved.”

He cites three recent examples of buildings that grew much larger by the time the repurposing process was complete, including the PCI Tower in Granville and Broadway.

“So the rules change from among the community, and that’s probably the biggest problem with high-rise buildings,” said Mr. palmquist.

He says he has also seen a significant backlog of repurposing activities that should keep the developing community busy for some time.

Mr. Palmquist has designed a number of towers during his career, but prefers a softer density. He is a citizen researcher and writes about his vision for the future of the city in his newsletter City Conversations. His interpretation of the Broadway Plan design has not been peer-reviewed.

“In Kitsilano, the plan also envisions high-rises up to 20 stories in the residential areas from 1st to 16th Avenue, Vine Street to Burrard – more than 50 high-rises will be enabled by the plan in that area.

“It pushes the boundaries of my gullibility to think that high-rise buildings over 30 blocks, in Kitsilano alone, will not lead to significant tenant displacement.”

City planning director Theresa O’Donnell spoke Monday night at the Grandview-Woodland Area Council meeting, her first meeting with a neighborhood association in three years since she moved from Dallas to Vancouver.

The issue of the towers in the Broadway plan and the upcoming Vancouver plan was one of the main concerns in a meeting that was at times a heated discussion.

Ms O’Donnell said there were exaggerations about the number of towers proposed and that they had policies that would slow the pace of development.

“We’ve reached some pretty ambitious heights, but by the time you look at rent control and affordability and sustainability requirements, it’s going to be a bit of a slog for these guys,” said Ms. O’Donnell.

“There are a lot of buildings in the watershed of that plan that seem to be under threat… It’s very difficult to control that speculative growth when you look at the species densities that are being proposed for some of those sites,” he said.

Mrs. O’Donnell said there was a misunderstanding about the plan.

“I know those fears are there… If you look at 20 or 40 floors, it seems like a stroke of luck for developers, but when you get in there and realize what those requirements are, it’s not.

“If you look at what’s being proposed, I think you’ll see that it’s a very good plan. It will have the strongest rent protection anywhere in the country, not just the city or the Mainland, but the country… it will slow the rate of development.

“This will by no means be rapid growth.”

Your home is your most valuable asset. We have a weekly Real Estate Newsletter to help you stay on top of housing news, mortgages, the latest closings and more. Register today.