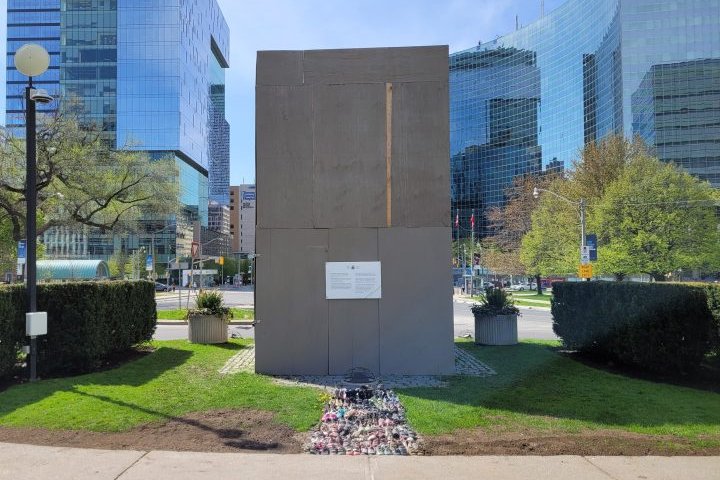 The statue of Sir John A. Macdonald at the foot of Queen’s Park has been covered for almost two years.

It was first unveiled in 1894 and created by Hamilton MacCarthy to commemorate Canada’s first prime minister, according to the Ontario Legislature’s website.

The statue was damaged in the summer of 2020 during protests in Toronto that targeted controversial figures from Canada’s colonial past. Repairs were made to the statue in 2020 and 2021 and it has been covered in a tall, rectangular box since it was first damaged.

At the top of University Avenue, against the backdrop of Queen’s Park, the box stands out. On the side is a note explaining that no decision has yet been made about the future, while a trail of infancy in front of it hints at the tragedy of residential schools in Canada.

“It will remain covered until a decision can be made about the future,” a spokesman for the Ontario legislature told Global News.

Macdonald, along with Egerton Ryerson, reportedly the architect of Canada’s residential school system, has had his name and likenesses removed across the country.

In April, a school in Brampton joined a growing list of institutions that have ditched the former prime minister’s name to replace it with an indigenous reference.

In Kingston and Waterloo, the respective school boards in both cities have moved to change the names of educational institutions associated with Macdonald.

The decision on how to proceed with the Queen’s Park statue — and whether it will ever come out of the box — will be made by Ontario’s next provincial government.

“Any decision on the statue rests with the chairman of the legislature, in consultation with the minister of government and consumer services (this ministry owns the statue) and the elected members (representing the chairman),” said the spokesman for the statue. legislature.

“For the time being, no change is planned in the status of the monument.”

It is unclear what exactly Ontario’s main parties intend to do with the statue, which stands on a plinth in the heart of Ontario’s democracy.

Ontario’s Greens, NDP and Liberals sent Global News details of how they would proceed with the statue, while the PC party disagreed with the legislature’s characterization that the decision rests with the speaker, the Minister of Government and Consumer service, as with regular MPPs.

“The legislative district is administered by the speaker and therefore the decision rests with the speaker,” said a PC campaign spokesperson.

In response to follow-up questions referring to explanations from the Ontario legislature, the spokesperson reiterated their response. “The decision rests with the speaker,” they said.

The chairman of the legislature is traditionally an MPP appointed by the ruling party. From 2018 to 2022, the speaker was PC MPP Ted Arnott.

The Ontario Liberals said that “our public monuments should be more reflective of the province and its peoples” and pledged to work with the speaker, MPPs and the community to make changes, including adding new statues in Queen’s Park, if chosen.

The NDP promised to set up a committee to “make binding recommendations on the display of historical figures and symbols in government buildings and public spaces in Ontario.” The committee would be headed by an indigenous representative, the party said.

“Ontario Greens believe that statues of historical figures with racist legacies should be removed from public spaces, as these figures are not representative of our contemporary collective society,” a party spokesperson said.

The decision on whether or not to display the statue, which will be covered for nearly two years, rests with the party that forms the government and elects the provincial president and minister of government and consumer services after the upcoming Ontario elections.

Ontario goes to the polls on June 2.

— With files from Ahmar Khan