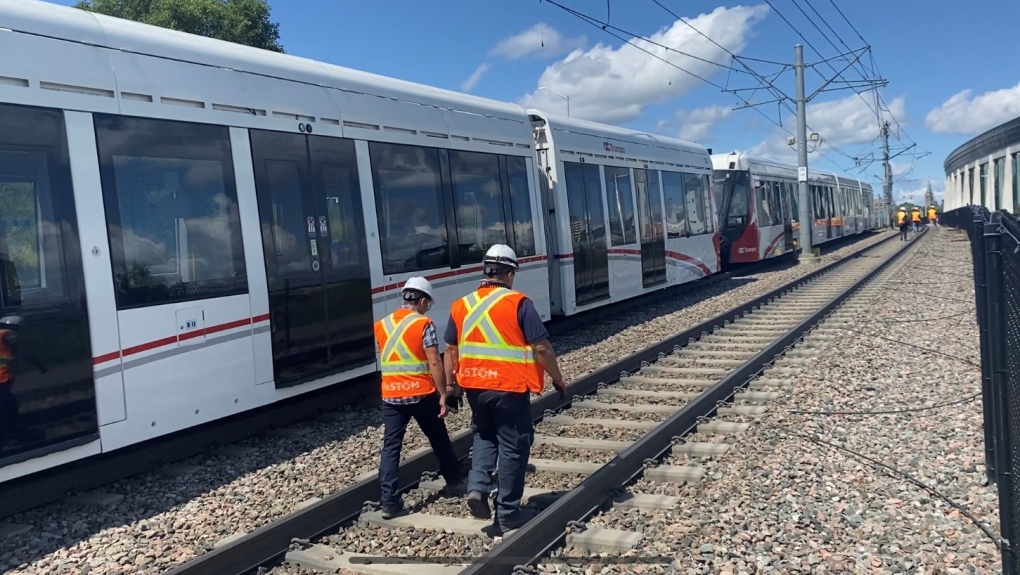 Damage to Ottawa’s Confederation Line LRT could take “several days” to repair, according to a new memo from the city’s general manager of transit services.

In a memo sent Monday afternoon, Renée Amilcar said crews are on their way to Ottawa to help repair overhead wires damaged by Sunday’s storm. Work is expected to start on Tuesday morning.

“In addition, there is a stopped train on the line at uOttawa Station that lost power when the overhead wire was cut. It should be returned to the Maintenance and Storage Facility (MSF) for a thorough inspection,” Amilcar wrote. “Rideau Transit Maintenance (RTM) will also conduct an inspection and make necessary repairs to the rails in the area. This work is expected to take several days.”

Amilcar said Monday morning that the system appears to have been damaged by a lightning strike. There were no trains all day between Tunney’s Pasture and St. Laurent stations, with some service between St. Laurent and Blair on the east side of the line.

Amilcar wrote that OC Transpo is waiting for RTM to make infrastructure repairs so trains can run between Tunney’s Pasture and Rideau stations to restore some service to the western LRT.

The R1 bus service will continue to operate Tuesday between Rideau and St. Laurent stations.

“Line 1 service is expected to begin in the west tomorrow afternoon,” Amilcar said.

Amilcar says she will provide an update on Tuesday on both the wheel problems identified over the weekend and those that arose on Monday.

“Although both happened just days apart, they are not related,” she said.

A storm swept through eastern Ontario, causing widespread damage to rural communities outside the city and some power outages in Ottawa.

Reid DeLong was on the train Sunday night when he saw lightning just before his train came to a stop.

“I was between Ottawa U and Lees when I saw the lightning strike,” he told CTV News Ottawa. “I thought it was a bit out of the way, but probably in about 20 seconds or 30 seconds we had the train come to a complete stop and it seemed like everything was at a standstill.”

He says passengers waited about 30 to 40 minutes for a replacement train.

“In the end it was okay, no, the power doesn’t matter, so we’re going to bring a train to you and you’ll get off the train accompanied by officers,” he said.

Timothy Lethbridge, a professor of software engineering at the University of Ottawa, posted a video on social media showing some of the damage. He tells CTV News that he suspected the LRT would be offline for a few days.

“Once they remove the train, they have to put in new overhead lines, they have to weigh them properly and make sure they are balanced on both sides,” he said. “They need to bring in the expertise to do it, including gently removing the train, then reconstructing and recalibrating. Engineering things of that level of complexity don’t get done quickly, and it just seems unthinkable to me that would be done.” ‘at night.”

“If there’s a significant line shutdown, you need to be able to communicate that to the public, not just through social media,” he said. “The audio system that all stations have; signage, where you put people in vehicles to put a significant amount of temporary signage at stations to inform riders where to go.”


GUESSES WHO WAITING UPDATES ALL DAY

Transit committee councilors said they were waiting all day for information and were just as in the dark as their constituents.

“This is fluid, it’s happening as we speak. They’re trying to figure out what to do with it, so I can’t answer a lot of questions about that,” he said.

count. Theresa Kavanagh, a member of the city’s transit committee, said she had not heard any details about a timeline as of Monday afternoon. She told CFRA’s “Ottawa Now with Kristy Cameron” that the damage could be worse than initially suspected.

“You have to ask yourself how often this can happen. How are we going to prevent it? What are you going to do for the next steps?” she said. “Right now we only have the memo we got about the R1 bus service taking place.”

That memo from Amilcar regarding the R1 service, identifying lightning as the suspected problem, was delivered to the media at 8:52 a.m. Monday. Kavanagh spoke just after 4 p.m. and said she had learned no new information. Amilcar’s update arrived in CTV News Ottawa’s inbox at 5:36 p.m.

“I don’t think they have anything to tell us and it’s frustrating because we don’t know,” she said. “I think they should tell us, ‘We don’t know yet and we’re still working on it,’ because people have yet to make plans. We don’t want to give false hopes and we want to be as accurate as possible… but we have to know.”

Brockington, another transit commissioner, told CFRA Monday afternoon that he had not received an update since 8:36 a.m.

“People who take transit rely on transit mostly need information to plan their day,” he said.

“I’m a big believer in providing as much information as possible to the public. I just don’t think they’re there yet.”

Brockington had expected an update before the end of the day.