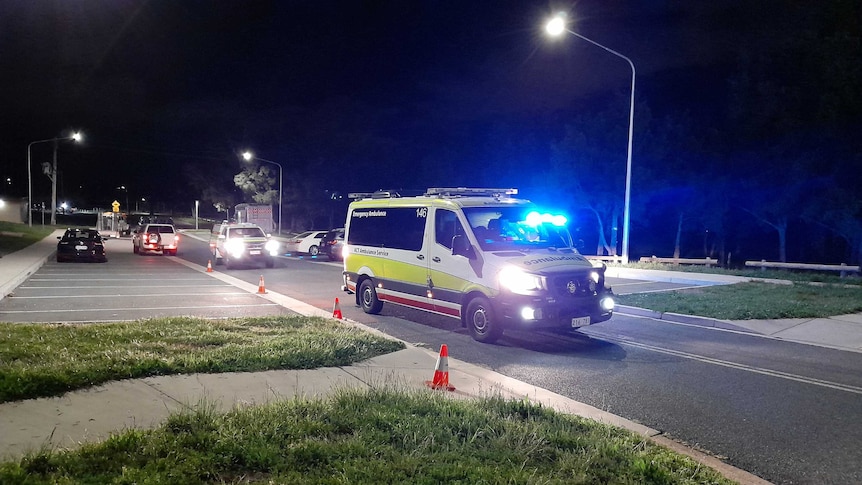 The parents of an 18-year-old who died of multiple stab wounds after a fight at a skate park in Canberra made a devastating report to the ACT Supreme Court on the night of their son’s death.

A boy, who was 15 at the time, is on trial for murder in the death of the 18-year-old and pleads not guilty.

But the teen pleaded guilty to stabbing the victim’s 16-year-old cousin, who survived his injuries.

All three men were involved in a brawl, involving about 12 people, that broke out after two of those in attendance argued on Snapchat.

The 18-year-old’s parents today described the last time they saw their son and how they learned of his death, played out in police interrogations before the jury.

The man had driven his cousin and two of his friends to Weston Creek Skate Park for the staged fight.

The court heard how the young man had been an avid boxer, training in a gym and garage at home.

His father described how he last spoke to his son about 11pm and said the 18-year-old had warmed up by the stove and was on the PlayStation.

The couple discussed how not to stay up too long because their family planned to take their “snow dog” out to the snow at Corin Forrest the next day.

His father said he thought he heard his son go down in his boxing shoes later in the evening, but heard nothing more until he was awakened by a call from his brother to say their sons had been arguing.

The father went to the place where the police told him that his son had died.

The man’s mother said she had tried to contact him when she first learned her son was in trouble.

“I started calling” [his] phone and he didn’t answer and I knew something was wrong,” she said.

She said that when her brother-in-law told her what had happened, she dropped the phone.

Both parents said it was out of character for their son to leave the house without telling them.

Process for relying on circumstantial evidence

Yesterday, the jury learned that the 18-year-old had been stabbed six times and that two of the wounds were about 12 centimeters deep.

Prosecutor Rebecca Christensen told the court that no one saw the alleged murder, meaning the case would be based on circumstantial evidence, with the accused boy being brought to the scene, with a knife and the ability to carry out the stabbing.

The jury heard CCTV footage from across the skate park showing that from the time the first of three cars arrived for the staged fight, the brawl lasted just over two minutes.

Ms Christensen said her case at the time was that the occupants of a car descended on the two victims and beat them until someone got out of their car and said he had a machete.

She said she would show the people involved in the first attack and then retreat to their cars to get garden tools with which they smashed the victim’s car.

The jury was told that it is the Crown’s business that it was during this silence that the accused boy inflicted the fatal wounds.

‘I think I stabbed the man you were fighting’

Ms Christensen also told the court that some of the evidence would include accounts from other witnesses about what the boy told them after the fight.

That included a comment he allegedly made in the car to another person as they drove off.

“I think I stabbed the man you were fighting with,” the teenager is said to have said.

Ms Christensen said some witnesses reported seeing a knife in the waist of the boy’s pants.

Another is to tell the court how he overheard a conversation in which the boy said he stabbed about seven times, that “he just did it and kept doing it”.

“At this stage, they didn’t know anyone had been stabbed, let alone killed,” Ms Christensen said.

“We say the only conclusion is that he stabbed” [the pair]†

But the boy’s lawyer, David Barrow, said he would ask questions about the teen’s ability to deliver the fatal stab wounds and whether the other witnesses were telling the truth.

The jury has already heard that the boy claimed to have thrown the knife down a drain, and the weapon has never been found.

Mr Barrow also told the jury that he would investigate what he called the “arsenal” of knives found in the homes of the others who were present at the fight.