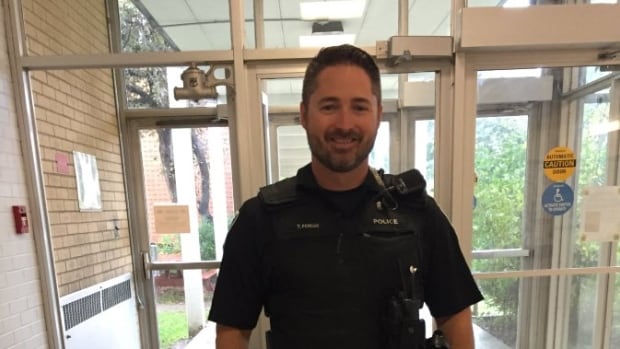 A week-long private disciplinary hearing was scheduled to begin Monday, but was instead moved to a three-day, public sentencing hearing that would last the rest of the week.

In exchange for the pleas, the service withdrew a second count of abusive conduct, alleging that Forgie viewed “sexual photos and videos” while on duty.

The Ottawa Police Department (OPS) had attempted to fire the officer, but declined to do so. The force now seeks a two-year demotion, while Forgie’s attorney Connie D’Angelo argues for 20 days of wages forfeited.

In August 2020, a woman sent a message to Forgie on Facebook asking for help getting away from her abusive boyfriend, Police Prosecutor Vanessa Stewart told the hearing on Wednesday as she read out an agreed statement of fact.

Forgie was off duty, Stewart said, but he sent the woman back with a plan to contact him if her boyfriend left the home.

The officer then called the patrol sergeant and had the police respond.

The partner assault unit took up the case and eventually charged the woman’s ex-boyfriend with assault and sexual assault — charges still pending in court. During that investigation, the woman agreed to allow the police to download the contents of her mobile phone.

The lead detective in the partner assault file discovered possible misconduct in Forgie’s text messages with the woman and sent what she found to the chain of command.

At the woman’s request, Forgie conducted multiple searches months after the woman’s original plea for help, Stewart said. He looked up the file in various databases, accessed working drafts of reports, and searched for the terms of new charges against her ex-boyfriend.

Can you look it up or could it get you in trouble? I’m devastated because I’m scared… Anyway you’re the only cop I know lol so thought I’d just ask.– Facebook message from wife to Forgie

Professional detectives eventually confronted him with evidence of “an inappropriate relationship with a victim of a crime and inappropriate disclosure of police information to that victim in an ongoing criminal investigation,” Stewart said.

Only then, she added, did Forgie acknowledge that he even knew her.

Forgie told police he sought out the suspect and the police file after the woman messaged him on Facebook.

“Hey, remember how I was so frustrated with the system because my ex I’ve accused of sexually assaulting is being released, not being monitored and can do pretty much whatever he wants?” read her message. “Well he has been near my work and yesterday I got a call that he has been arrested for an unrelated incident but they don’t tell me what to look out for. How is it not my business to know what is going on?”

“Can you look it up or could it get you in trouble? It’s killing me because I’m scared… Anyway, you’re the only cop I know lol, so I thought I’d just ask.”

Forgie agreed to do it and told the woman to remind him one Monday, when he was back at work as a school employee and had access to the database.

He conducted unauthorized searches of both local and state police databases between Dec. 14, 2020 and Jan. 12, 2021, Stewart said.

Forgie eventually told the woman that her ex-boyfriend was still in custody under the unrelated charges and shared the nature of the alleged crime.

“He’s a piece of shit,” Forgie wrote in messages to the woman. He also told her to call the police whenever the man contacted her. “Don’t be scared, I’ll deal with him,” he wrote.

The prosecution filed a series of text messages between Forgie and the woman that previously allegedly contained sexual photos and videos that Forgie allegedly viewed while on duty. Its contents were not read aloud at the hearing.

Forgie was suspended with pay as a school resource officer in March 2021. That suspension ended earlier this year.

‘I am responsible for my actions’

After pleading guilty, Forgie said at the hearing that he accepts “full responsibility for the charges.”

“I fully understand that I am responsible for my actions and how they tarnish the reputation of the Ottawa Police Department,” Forgie said.

Forgie said that when the woman contacted him on Facebook to ask for his help first, he didn’t even know her full name.

“It wasn’t until a few hours later that I realized she was the girl I had spoken to a few months earlier.”

The media coverage regarding this dossier was demeaning and was sent to my children by their friends via social media.– Art. Troy Forgie

Forgie said they crossed paths later in a parking lot, so he messaged her to ask how she was doing.

He said he “gave her as little information as possible” to “give her peace of mind when she was scared,” and he sympathized with a sexual assault victim who navigated a maze to get simple answers.

He said he would use the disciplinary sanction against him as a teaching opportunity to try to advocate for a dedicated phone line to help crime victims.

During the hearing, Forgie said he has already suffered repercussions in his personal life as a result of media coverage of his misconduct.

“My actions leading up to these charges put a strain on my family in an already difficult year,” Forgie said. “The media coverage of this file was demeaning and was sent to my children by their friends via social media.”

He was temporarily fired from his job as a baseball coach when a news article was sent by the organization saying his wife’s health had been compromised.

But Stewart argued that Forgie “used his position as a police officer to put himself in a serious sexual assault investigation” and that he only blamed himself for the financial and personal fallout he faced.

Forgie, Stewart said, continued to communicate with the woman on Snapchat even after being made aware of the misconduct complaint against him.